How monochromatic is the light from LEDs? I want a set of light sources which will emit light of different wavelengths, as narrow a spectrum as practical.

How wide are the spectrums of typical LEDs?

You will be getting a narrow band, many LEDs have width of about 20 nm at 50% down from the peak; other LEDs have quite a wide band. The datasheets for LEDs will give you a curve for those specific to a particular LED.

Here are the graphs of LEDs I chose for a scientific imaging project based on how narrow their bands were without resorting to exotic components. I wanted a selection of colours as narrow as possible (but cheap), and bought well-known manufacturers' parts with datasheets, which I summarised as follows: 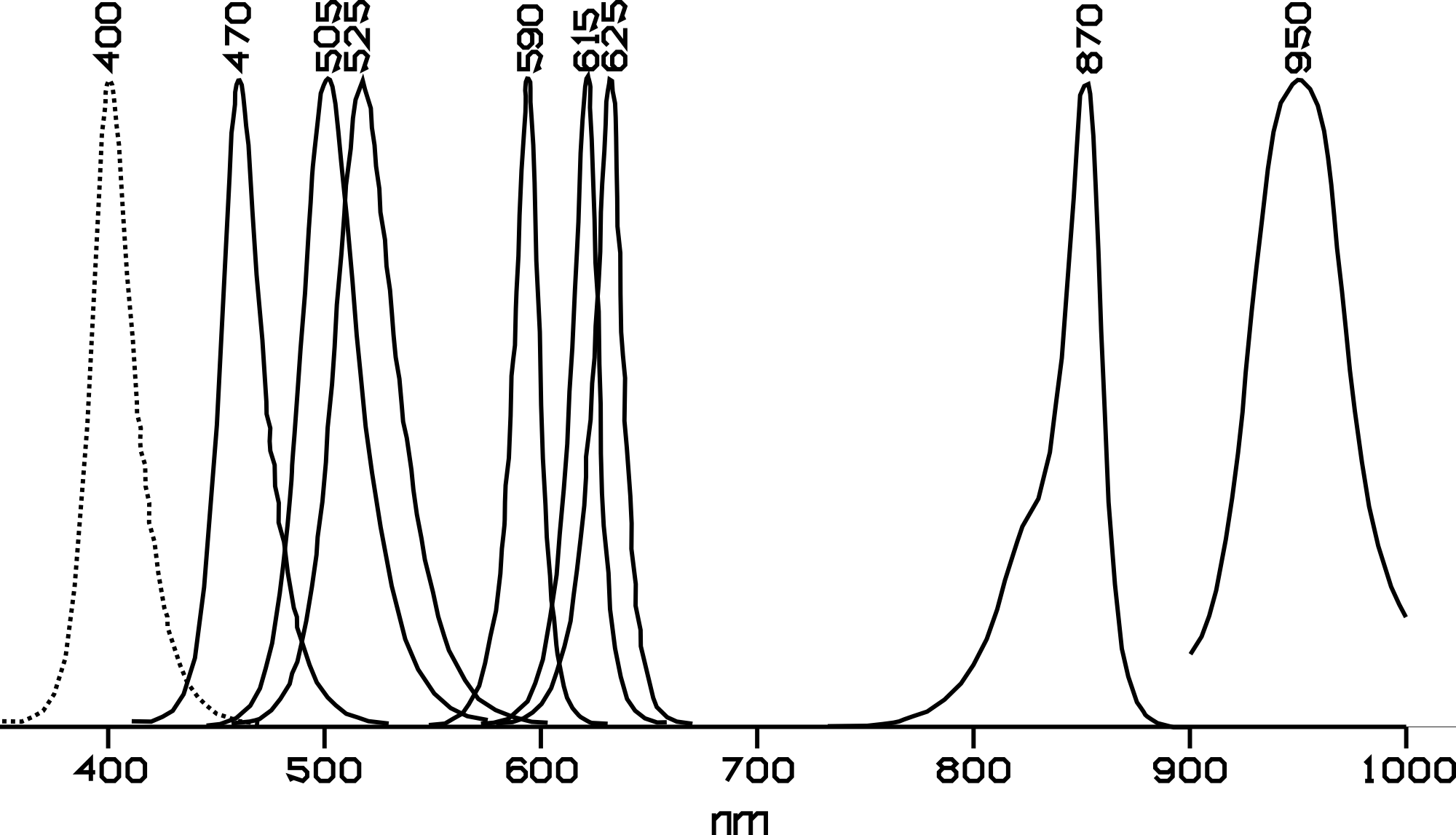 (The 400 nm line is dotted because it was an estimate. The others were traced from datasheets and normalised to give same height.)

If you need narrower:

You get more lumens per watt from phosphor converted LEDs. You can tune the color temperature with phosphor composition. Additionally, blue diode used in these diode is very stable with temperature variations so when the temperature of the die increases you do not loose much lumens.

RGB mixed white LEDs do not have high efficacy (lm/W). The color point is not stable because the red diode used in the chip is very temperature dependent. When the temperature of the die rises, the color point of the whole LED will shift towards cyan and the overall efficacy drops.

These two structures will have different specra and this it the cause for different efficacy figures. Eye has its peak sensitivity around 555nm. Take a look at V(λ) function:

and compare it to the spectrum of phosphor converted LED:

You can clearly see the PC white LED has much bigger overlap.

One more advantage of phosphor converter LED over RGB ones is color mixing. RGB diode will have three separate dies for generating red, green and blue light. If you use this type of LEDs in a lamp the overall light will be a mix of three colors originating from different places. This may give a color shadow effect which is sometimes undesired.

Electronic – Maximum LEDs on a matrix

First, let's say we work with these two functions:

This one is easy:

Also, we can now easily understand the function \$\mathsf{p(n)}\$:

I just included the cases for 1, as this is a special case. Normally, you can just use the second function.

In this method, we have two LEDs between every set of two pins. We can calculate the amount of sets of two pins with:

Now we can say that:

We saw that the amount of pairs of pins equals \$\mathsf{n\cdot(n-1)}\$. With some reverse thinking, this leads to:

I just included the cases for 1, as this is a special case. Normally, you can just use the second function.