I understand synchronous serial communication conceptually but I'm having trouble with how asynchronous works. Specifically in this situation:

Let's say I want to send a byte: 0x03. We have a start and stop bit, which are low and high, respectively. How does the receiving device "know" that I'm sending a start bit followed by 6 0s? How does it know that that isn't just one long start bit?

Followup: what exactly is a UART? I'm asking what the common use is, as I've seen various places refer to it as a standard and others as a piece of hardware.

How does the receiving device "know" that I'm sending a start bit followed by 6 0s? How does it know that that isn't just one long start bit?

Because with this kind of communication, both the sender and receiver have to agree ahead of time on a few parameters. The two key parameters here are the baud rate and the number of data bits.

The line starts out in the idle level. The transmitter first sends the start bit, which is at the opposite level. It then sends the data bits, followed by the stop bit.

Unlike what others have said, the stop bit is not a checksum. It is required so that there is always a transition at the leading edge of the start bit. Otherwise, if the last data bit ov the previous character happened to be of the same polarity as a start bit, the receiver wouldn't be able to see the start bit if a new character was sent immediately. The stop bit is essentially enforced line idle time between characters. That time is also used to absorb some clock mismatch between the sender and receiver.

When idle, the receiver monitors the line looking for it to change to the non-idle state. When that happens, it starts a stopwatch. Since it is configured for the same bit rate as the transmitter, it knows when each data bit is sent, whether it differs from a previous bit or not. The middle of the first data bit is at 1½ bit times from the leading edge of the start bit. The second at 2½ bit times, etc.

After the last data bit is received, the receiver waits for the line to go back to the idle state, then waits for the next start bit again.

A UART is a device that does all this transmit and receive timing for you. You configure the UART for the baud rate you will use, the number of data bits, and a few other parameters. After that, you usually just give it full bytes and it takes care of chugging out the bits. For receiving, it detects the start bit, does the timing, grabs the bits, and gives you a byte on a silver platter, often with some additional optional status information. 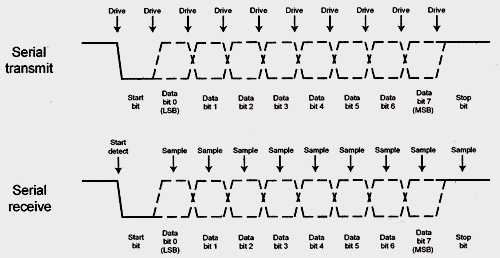 Note that the UART has an "idle" state - HIGH in this case. The start bit is the opposite of the idle level, and the stop bit returns you to that level. The receiver waits for the transition from idle to not idle to know when it's starting to receive.

Of course you now need a way of knowing which of your bytes are which - and now you are into the realms of data packets, and higher level protocols.

How do you (or would you) design your systems protocol?

In my experience, everyone spends a lot more time debugging communication systems than they ever expected. And so I strongly suggest that whenever you need to make a choice for a communication protocol, you pick whichever option that makes the system easier to debug if at all possible.

Writing your own communication protocol from scratch is highly likely to slam against many of the same common problems that everyone has when they write a new protocol.

There's a dozen embedded system protocols listed at Good RS232-based Protocols for Embedded to Computer Communication -- which one is the closest to your requirements?

Even if some circumstance made it impossible to use any pre-existing protocol exactly, I am more likely to get something working more quickly by starting with some protocol that almost fits the requirements, and then tweaking it.

As I have said before:

Unfortunately, it is impossible for any communication protocol to have all these nice-to-have features:

I would be surprised and delighted if there were any way for a communication protocol to have all of these features.

What are the other possible techniques/solutions exist to address the problem?

Often it makes debugging much, much easier if a human at a text terminal can replace any of the communicating devices. This requires the protocol to be designed to be relatively time-independent (doesn't time-out during the relatively long pauses between keystrokes typed by a human). Also, such protocols are limited to the sorts of bytes that are easy for a human to type and then to read on the screen.

Some protocols allow messages to be sent in either "text" or "binary" mode (and require all possible binary messages to have some "equivalent" text message that means the same thing). This can help make debugging much easier.

Some people seem to think that limiting a protocol to only use the printable characters is "wasteful", but the savings in debugging time often makes it worthwhile.

As you already mentioned, if you allow the data field to contain any arbitrary byte, including the start-of-header and end-of-header bytes, when a receiver is first turned on, it is likely that the receiver mis-synchronizes on what looks like a start-of-header (SOH) byte in the data field in the middle of one packet. Usually the receiver will get a mismatched checksum at the end of that pseudo-packet (which is typically halfway through a second real packet). It is very tempting to simply discard the entire pseudo-message (including the first half of that second packet) before looking for the next SOH -- with the consequence the receiver could stay out of sync for many messages.

As alex.forencich pointed out, a much better approach is for the receiver to discard bytes at the beginning of the buffer up to the next SOH. This allows the receiver (after possibly working through several SOH bytes in that data packet) to immediately synchronize on the second packet.

Can you point to the cons in the above list which can be easily worked around, thus removing them?

As Nicholas Clark pointed out, consistent-overhead byte stuffing (COBS) has a fixed overhead that works well with fixed-size frames.

When a receiver is turned on in the middle of a packet, and the data field of a packet happens to contain bytes that appear to be a start-of-packet (the beginning of a pseudo-packet), the transmitter can insert a series of end-of-frame marker bytes after that packet so such pseudo-start-of-packet bytes in the data field don't interfere with immediately synchronizing on and correctly decoding the next packet -- even when you are extremely unlucky and the checksum of that pseudo-packet appears correct.