I'm trying to drive a STP16FN06 from a Raspberry Pi GPIO pin but I'm a bit lost.

The schema below represent (I think) how it is currently wired, on the left the RPi pin + ground and on the right a 5V DC supply. 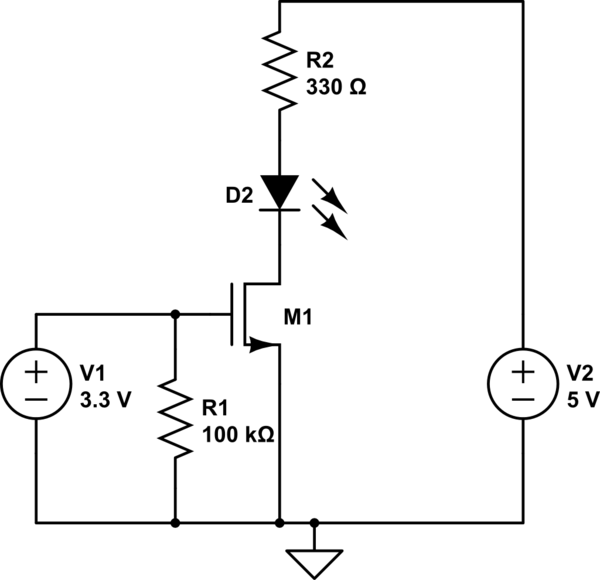 If I remove the MOSFET and plug it directly to the 5V, it light up so this part is ok.

When I set the pin to high, I have 3.3 between it and the ground but nothing shows and from what I understand the MOSFET should be on between 2 and 4V.

I'm not really sure what I've missed but being a bit new to electronics there's probably some beginner mistakes in there.

You have to actually read the datasheet. Note that the gate threshold voltage can be up to 4 V, and that is only where it starts to conduct. This MOSFET is simply inappropriate for this application. It is also much larger and for much higher voltage and power than you need. Those by themselves don't hurt you except that other specs have been traded off to get those. MOSFETs that can handle more than 30 V usually can't be turned on very well by logic level signals, and this one is no exception.

Replace with a more suitable FET, like the IRLML2502, and your circuit should work as shown. Or, you can use a jellybean NPN transistor, like 2N4401, with a base resistor and maybe adjust R2 a bit.

The diagram in the MOSFETs datasheet that could (should?) have alerted you is on p.6:

This diagram shows that your MOSFET can handle no current with its gate at 3V, and it can handle the current it is rated for (16A) from ~ 5.5V. (Note that such diagrams are typical, not worst case, so you can't use them for accurate design calculations, but they still give good indication).

You should use a MOSFET has the vertical part of the curve below 3V. Such a MOSFET will be rated for much lower currents.

If you realy must use a MOSFET like this one you will need to amplify (convert) your Pi's output to a higher voltage, for instance using a MOSFET driver chip.

The Raspberry Pi is generally powered from a 5V wall-wart type of DC power supply. The secondary is galvanically isolated from the mains voltage for reasons of personal safety (a fault will not expose the end user to the mains voltage).

The DC return of your bridge rectifier circuit is most certainly not isolated from the mains. The Raspberry Pi ground is 'floating' with respect to the bridge rectifier ground - there is no galvanic connection between them, hence your voltage measurement.

If you were to connect the DC return of the bridge rectifier circuit to the Raspberry Pi ground, you bypass the galvanic isolation that the DC power supply gives you. This means your Raspberry PI is now mains-referenced, and any fault could potentially expose you you to lethal voltages. I wouldn't do this.

A further complication comes if you also hook up an earth-referenced return to the Raspberry Pi, like a connection to a PC, with the mains-reference return connected. When you mix a mains-referenced return like your rectifier circuit with earth, things are going to explode (you essentially short out your bridge through the earthed return, which is often a flimsy wire that gets really hot and melts/catches fire while blowing up everything connected to it). Another reason not to do this.

You would be much better off with a small line frequency transformer to (1) step down the mains voltage to a lower level ahead of your resistive attenuator, and (2) provide galvanic isolation from the mains. Put your bridge and attenuator in the secondary of the transformer. With this, you can safely connect the low voltage isolated rectifier return to the Raspberry Pi return.

(You also must include a fuse in the line to isolate the rectifier circuit from the mains if there is a severe fault like a transformer fault or a short circuit.)

I did some experiments with couple of floppy drives I have and it appears that on the step pin, current is limited to around 5 mA. This means that we can indeed omit the collector resistor in this case. For base, I'd recommend a 1 kiloohm resistor. This will give us 3.3 mA coming into the base of the transistor, which should be more than enough to saturate usual small signal transistors.

Another point worth mentioning here is that same setup will most likely be needed for the direction pin as well, in order to prevent read heads from colliding with end-stops. Some floppy drives have security mechanisms which will prevent the stepper motor from forcing the head when the disk is inserted.

I was about to make a really long comment, but then decided that it's better to turn it into an answer in hope that you'll be able to better understand our standpoint.

First, you're being difficult to work with! That may not be obvious to you, so I'll try to explain: You came to us with a question that looks basic and emits air of someone who isn't very experienced with electronics. In your question, you already have some idea for a solution to your problem (which is good, since in general we like it when people post questions they thought about) and then you exclusively ask for help related to implementation of your solution and are avoiding any information that could lead us to provide any other way to accomplish your real objective (which is bad).

The problem is that your solution (as you posted it) is in direct conflict with what we got as a part of basic electronics training! This is NOT a minor thing. I'll provide an analogy which will hopefully make this a bit easier to understand. Imagine this scenario: You just spend a whole evening drinking alcoholic beverages with your friends and can barely walk in a straight line. Now you're planing to get in your car and drive back home. While there is a chance that you will be able to get home safely, and it's true that many have done so in similar circumstances, there is also a great big chance that you will crash and kill yourself (or worse) and possibly someone else as well, making such a plan a bad idea in general.

It's relatively same with what you're providing. Sure, it seems that nothing bad is happening when you short the two wires together by hand (just as many drunk people drove safely to their homes), but it doesn't mean that it's the proper way to do it (unless we're really convinced that it's safe, for which we need details which you refuse to provide believing that your plan is correct).

Instead, the proper way to do this (assuming that you just have a simple control line that's being monitored by stepper motor driver) would be to place an appropriate resistor between the transistor and +5 V line, which will limit the current, so that we don't have a short-circuit there which could potentially destroy the driver.

Unfortunately, we can't tell you what type of resistor to use, since we don't know anything about your circuit and you refuse to provide information. Also the transistor itself needs to be appropriately dimensioned to be able to survive the current, provide low enough impedance to the current's path and switch quickly enough. Again we can't do that without any additional information.

Next, in comments I recommended a MOSFET since they can survive greater currents and dissipate less power that NPN transistors. You said that you don't have a MOSFET and want to use an NPN transistor. It's quite likely (based on my assumptions at least) that your NPN transistor would work just fine instead of a MOSFET, but for it and the Pi to work fine, you should use a resistor to control the current going from the Pi into the base of the transistor. Remember, Pi can provide only a little bit of current on its GPIO pins. Without knowing which transistor you have, we can't give you a good recommendation for the base resistor value. We can provide some values that may or may not work fine, but that's against what we're supposed to do and it's called bad engineering. You could also make this work without a base resistor on the transistor, but for how long it's going to work (if at all) and will the Raspberry Pi survive that, we can't tell. You'd be risking a $35 computer for a $0.1 resistor, which is pointless.

Finally, there's the coupling of two grounds. Since they're both grounds of two different wall adapters, I personally can't see anything bad happening if you short them together, as shown in your circuit. Some noise may couple into the Pi from the motor, but I don't think it will be a problem.

I hope that this provides a bit of background on the long comment chain.