While building smps halfbridge (old ATX similar) recently I went to a problem:
When I use working transformer as a base drive one – it works good, but when I heat it up, unwind, and wind the same – it doesn't;
To disassemble the core I use this tehnic: https://www.youtube.com/watch?v=IOwT8GkvIjs, which works well, but unfortunately I think it degrades core properties:
I made a test – I wound 4 additional 4 turns on the factory working transformer, inductance I measured was 18 uH, then i coocked it up, and mesured it one more – only 2-3 uH!!. Why does this happen? Is it normal? Is it possible to disassemble this cores without this happening? Can I somehow restore core properties?

Photos after boiling (core is glued with hot glue, so there is not visible gap): 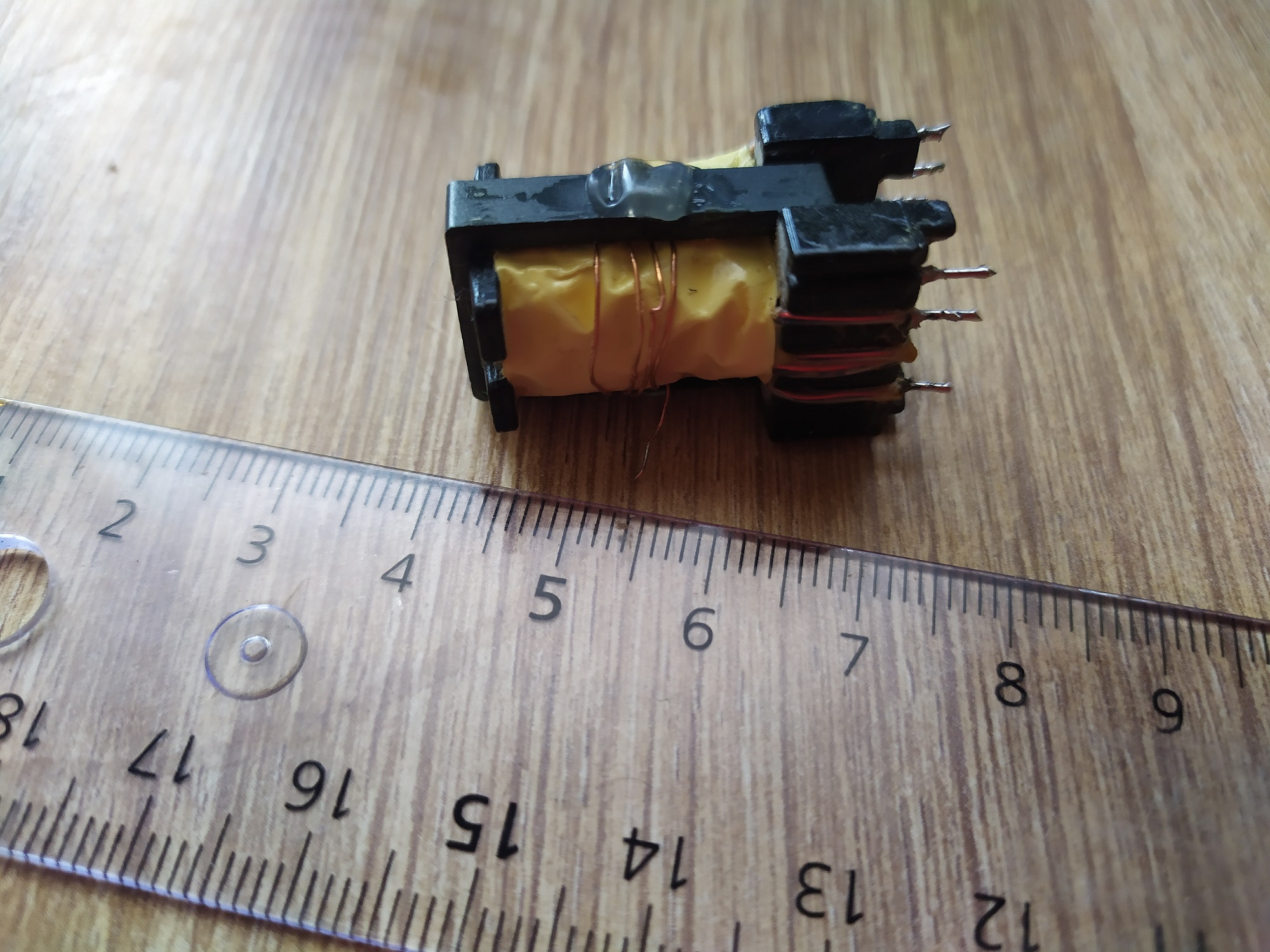 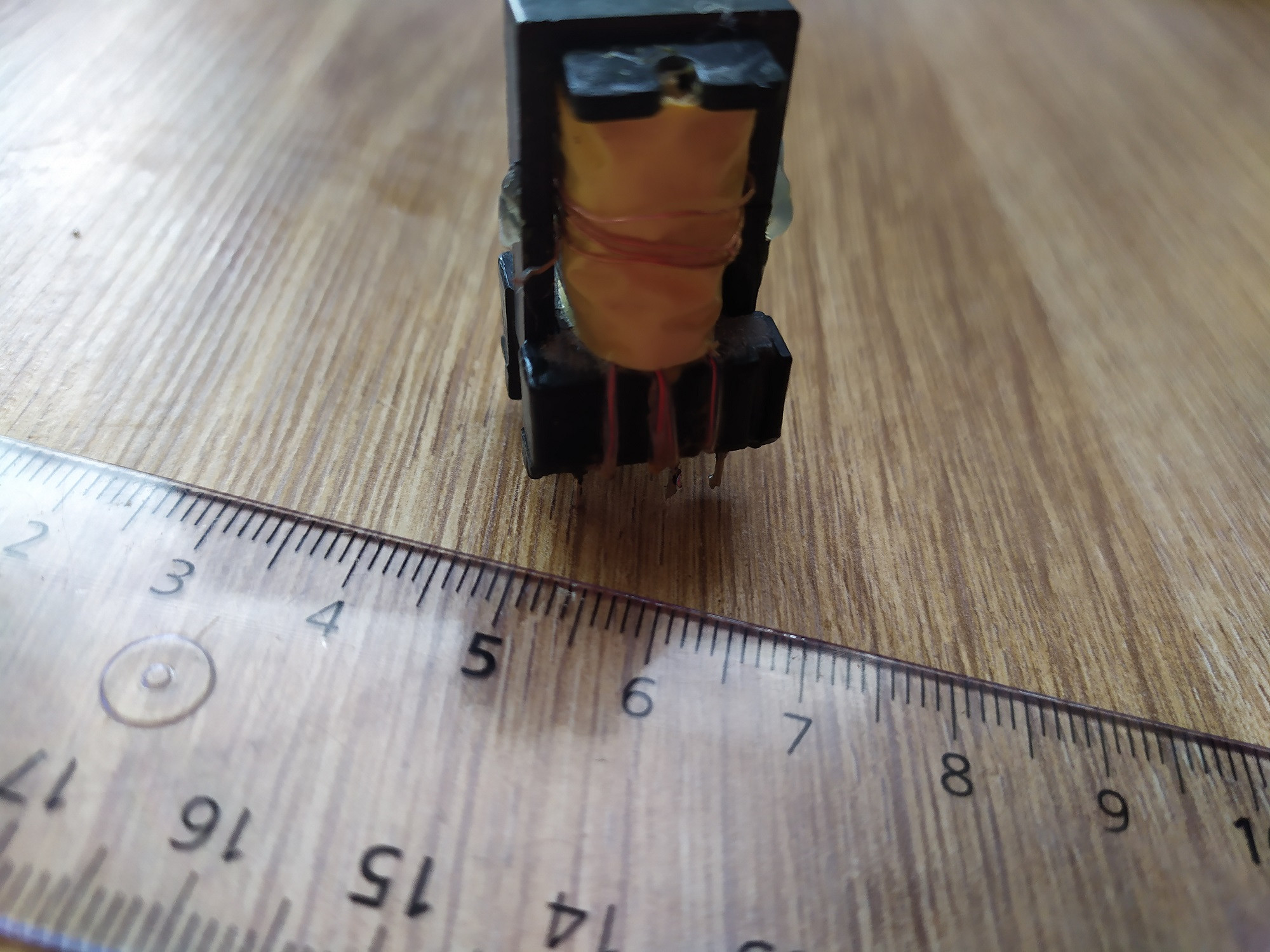 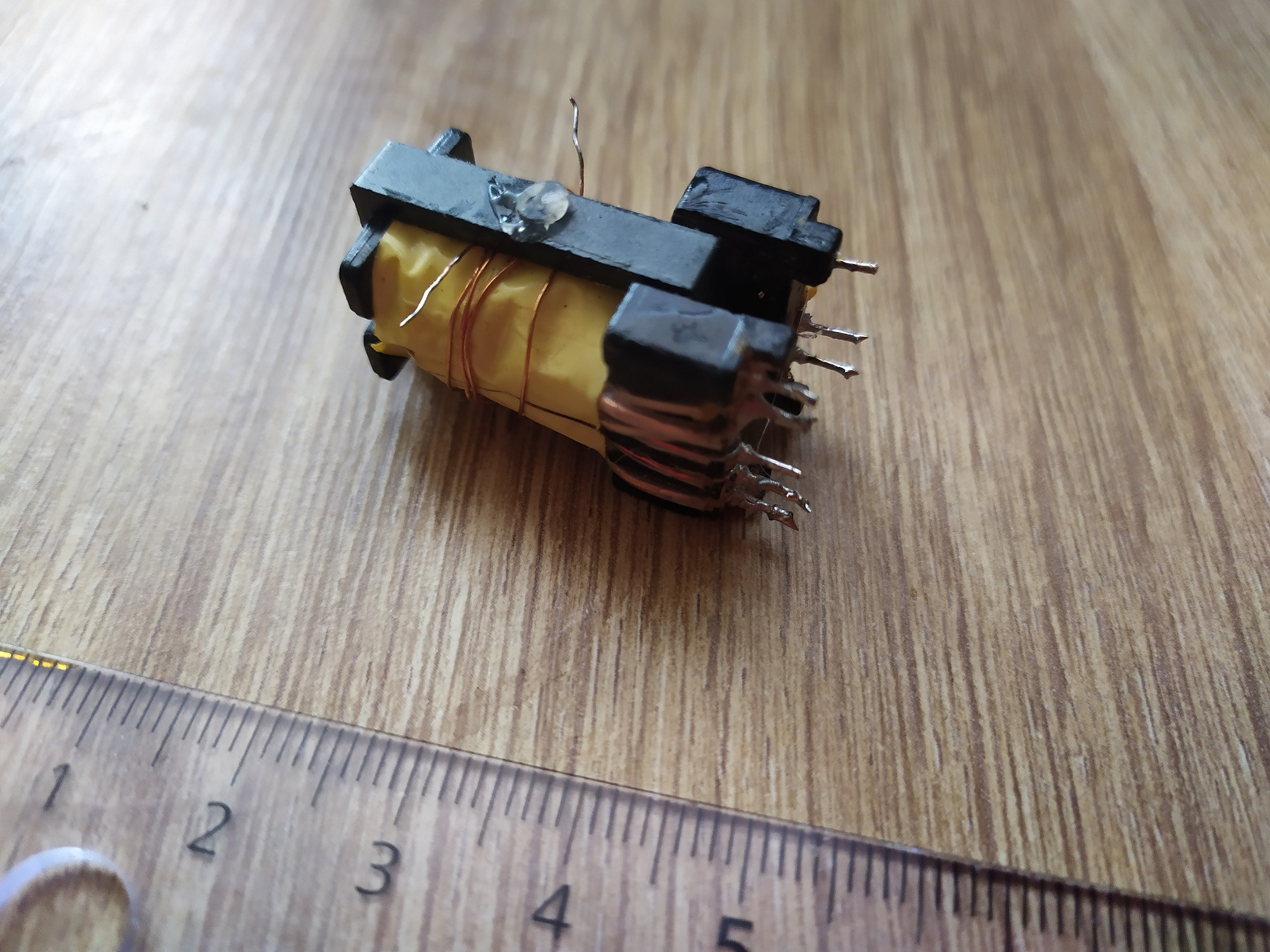 No, there are no ferrite materials that thermally degrade at 100°C. Even if heated above their curie temperature (this is the temperature a magnetic material looses its magnetic properties entirely and behaves similar to an air gap. Or for permanent magnetics, this completely demagnetizes them), virtually all ferrite materials will regain all their magnetic properties, unchanged, once they fall below that temperature again. They also do not show thermal aging effects.

So what is going on? Why are you measuring reduced inductance?

There are two possibilities, and it will require more measurement on your part in a more controlled way to determine which.

1. It's not the ferrite, it's everything else

To be sure that the ferrite is really the cause of the inductance loss, before boiling, use a rotary cutting tool or even wire snips (and some determination) to remove all present windings on the transistor, leaving only the glued core halves. Now wrap a fixed number of turns of insulated wire around the core and measure the inductance. Now remove the winding, and boil the core. Once it has dried and is back at room temperature, wind the same number of turns around it again and measure the inductance.

If you haven't done this, then you don't really even know the problem is the core. Indeed, it could be one of the remaining windings. Many wire insulation materials are only rated to 85°C and would begin to melt at boiling temperatures. Even if your own 4 turns are well separated, the other windings you've left on during boiling probably aren't. Even if the short was still relatively resistive, this would still be a shorted winding. And it is a transformer. This will significantly impact the measured inductance of any other windings. Specifically, increasing load on a given winding will effectively reduce the measured inductance of any other windings.

However, I emphasize the word measured as the inductance is not actually reduced, but rather the load impedance of the other loaded/shorted winding is essentially in parallel with the other windings, as this is kind of the one of the main features of a transformer or any other magnetically coupled inductances.

That will, of course, make the inductance measured to be less. You can try this by putting a resistor in parallel with an inductor and measuring it as well. The parallel resistor isn't actually altering the magnetic properties of the inductor, but it will make it behave as if it has lower inductance, simply because less energy is able to be stored in its magnetic field and is instead being dissipated by the resistor.

This, I believe, is probably the most likely explanation.

In this case, the solution is simple: remove the shorted windings.

2. It's the moisture, not the ferrite

The heat will not have effected the ferrite, but there is a small chance the moisture may have. Gate drive transformers are often (though not always) made from a different ferrite material than high frequency power transformers (like the main transformer in a switched-mode power supply). By different, I mean it may merely be a different formulation but still a MnZn ferrite, or it can even sometimes be an NiZn ferrite. But there are many formulations from different vendors for each of these types of ferrite.

And all ferrites, to some degree or another, are porous. The manufacturing of sintering can all but eliminate porosity, but at the cost of energy and time. But it can also produce materials of highly controlled an uniform porosity, thanks to the sintering process itself. A powder or slurry is heated to a high temperature but below the material's melting point, where atomic diffusion occurs much more rapidly, fusing the power grains and burnin out any slurry, leaving the fused-powder structure. Depending on how long the atomic diffusion is allowed to continue results in a gradual reduction in porosity.

While some cores may not prioritize low porosity, others actually utilize it. These pores can act like a slight distributed air gap, imparting potentially desirable properties to the core (just as gaped cores use air gaps to achieve the same - usually higher magnetic saturation ratings).

Humidity can effect certain core material formulations due to this. And indeed, boiling a very small core like the one in your photos could potentially result in the core absorbing sufficient moisture to impact how it performs. Water is close to the same magnetic permeability as air or vacuum, but its dielectric constant is almost 80 times that of air or vacuum.

And ferrite, while fairly high impedance, is in fact slightly conductive. If you fill all those pores with something with a high dielectric material, you essentially create a lot of very tiny capacitors in the bulk ferrite itself. Which means that at higher frequencies, you have much lower impedance in the core to AC, and that impedance grows lower with increasing frequency. In other words it is an eddy current's dream. They can circulate through the entire core loop at sufficient frequency.

And now you have a similar situation to #1, a subtle but very real load (and high core losses as well) magnetically coupled to your winding, lowering the impedance and reducing the measured inductance.

This is a real thing - in fact there is an entire measurement technique called Dielectric Spectroscopy which leverages this to measure, say, water content of materials (especially minerals, but also other sacks of water like people).

If you're interested in this, I have gone into it more in-depth in another one of my answers.

Anyway, if it turns out to actually be #2, the ferrite core is actually having issues due to water absorption, then this is relatively easy to fix. Just bake the core in your oven (or toaster oven) at 300°F or so for a few hours. Whatever moisture it absorbed should be long gone by then.

Also, I too salvage magnetic cores sometimes. I've actually found some of the glue to require even higher temperatures than boiling, and as a result, began using a heat gun instead. Hold the transformer with pliers of course, and apply steady even heat all over (so the core doesn't crack - but even if it does, it is usually a clean break and super glue works very well to put them back together. And the core isn't going to care - it's a minuscule extra air gap at worst). I've found this method to be faster and more convenient (you can do it at your workbench). If you wanted to reuse the windings, this would probably not be ideal though.

Regardless, it is not the ferrite itself. Boiling it will have no effect on the magnetic properties.

Firstly, a larger core can dissipate heat without damage. This is because it has more surface area. If a smaller core would overheat (due to eddy currents, hysteresis losses, etc), then a sufficiently bigger core would not.

A fatter core also increases the inductance compared to a coil with the same magnetic path length and same number of turns, but on a thinner core. Why? Recall the definition of inductance: it is the ratio of magnetic flux to current:

One ampere through a turn of any wire of any size produces a MMF of one ampere. As the area of the turn increases, this MMF is applied over a larger space, and thus, there is more flux, and thus more inductance. That is, we get more flux \$\phi\$ per current \$i\$ as we make the turn bigger. However, this larger flux is spread over a proportionately larger area, so the flux density remains the same.

Thus, advantages of a fatter core:

Electronic – Can broken ferrite core be glued and used again

If the transformer already has an air gap of ~1.5 mm, an additional glue gap of 0.05 mm will likely make no difference.

If the transformer was glued before you disassemble it, it should be broken right where it was glued, cleaned to bare ferrite and re-glued in the same way. It's likely to keep its performance close to what it was.

If you break the core in some random place and re-glue it, you introduce an additional gap. It depends on the transformer's and the SMPS's design how much it will affect performance.

I have unglued a few transformers putting a knife at some of the glue joints and hitting it with something about 100 g heavy. It succeeded in about half of the cases.