I understand that Microchip has In-Circuit debuggers (ICD) which gives insight into a running PIC (or dsPIC for that matter) in real time. Then we have the ICE which goes a step ahead by replacing the microcontroller within the board and emulate it. The ICE gives full view of what would be happening inside the PIC had there been a real microcontroller on that board there.

Microchip also has something called the PICKit. It can be used to program a PIC. Can it also be used to replace the ICD? I am specifically referring to PICKit 3.

For Easy PIC PRO v7 here is a section for "Programming with ICD2/ICD3". Can the PICKit be used instead or shall I have to buy an ICD?

There is a nice comparison between the PICKit 3, ICD 3, and Real ICE here.

Otherwise, the PICKit and ICD are similar in features, except the ICD allows for more complex breakpoints, including software breakpoints.

The main difference between the ICD 3 and the Real ICE is that the latter uses the trace capability (like JTAG) built into chips like the PIC32 series. The Real ICE does not replace the microcontroller on the board with one inside the Real ICE (although the name seems to imply that).

The chart says the PICKit is not suitable for production programming, whereas the ICD and Real ICE are. I'm not quite sure what they mean by that, except perhaps the interface to the board is more failure proof. The interface for the Real ICE is on its own little daughterboard, so if you blow the output circuitry, you only have to replace that piece.

I strongly suggest you get an ICD 3 if you can afford it.

Electronic – Should I get the PICKit 2 or 3

I think the main reason behind PK3 hate is from this review by D.L. Jones. If you read (watch?) between the lines, D.L. Jones is upset because, well, the PK3 isn't the PK2. My response: It's a PIC chip programmer for hobby use, not for production work! Yes the physical UI is different between the two, but hey, your'e getting a OEM-supplied programmer for very little money that programs just about everything in their lineup (PK2 doesn't), so I wouldn't complain. Take what they give you! In the not-too-distant past, programmers were waay more expensive.

At work, we use ICD2 and ICD3 "hockey pucks" and the main reason we don't use PK2 is because the PK2 didn't support a particular micro we wanted to use in the past (the PK3 supports it now), so they had to upgrade. All of my coworkers said PK3 is probably a good way to start, since the part support problem seems to be resolved.

In North America, typical AC distribution has the neutral tied to earth, and most HV and LV circutry on the primary side will reference a primary return separate from the earth. See below: 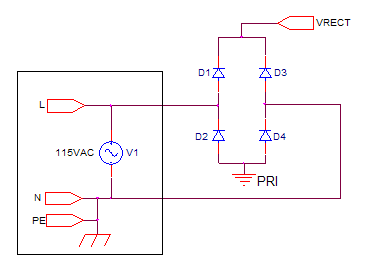 The return labelled "PRI" would be the reference point for most primary-side stuff. The point labelled "PE" represents the earth connection. (Fuse omitted - my bad)

Another common practice is to tie the returns of low-voltage secondary (i.e. mains-isolated) circuits to earth. Most everything out there follows this practice, for a multitude of reasons (safety, EMC, etc.).

What happens if you connect an earthed-secondary instrument to a primary return? You've earthed the primary return. What does that mean? 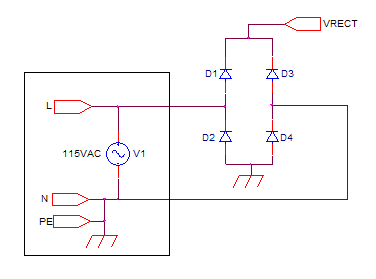 Is this really so bad? 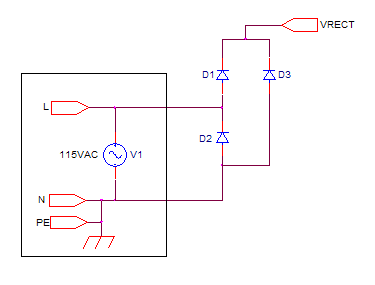 Actually, it is quite bad. Notice that direct connection from N to L through D2? This 'path of least resistance' will invariably include whatever wires / PCB traces / connectors that happen to be in the secondary return of your test gadget (usually very small and not rated for line current) as well as the primary return traces of the DUT (size depends on where you connect your test gadget - if it's a low power circuit, usually small and not rated for line current).

This is why earthing the primary return usually blows the snot out of everything. The connections involved often burn and fuse before the input fuse does, leaving you with lots of burning silicon.

That's also why isolated test gadgets are essential for primary-side work. I believe it's always sane to assume that the primary of any mains-connected circuit is never isolated. That way, I always instinctively use isolated test gadgets like differential probes, and use USB isolators without exception.

Further to your question: if your 12V power supply has a properly-designed transformer in it, you're no longer mains-connected. The transformer breaks the connection between neutral and earth, and you may earth the secondary return of this transformer without the same catastrophic risk. You may not, however, stick your earth in the primary side of the power supply, since it's still mains-connected.