What is a Fourier Series? What it is used for?

The term \$\dfrac{a_0}{2}\$ is a constant, that's the DC level. It could also have been written without dividing by two, but this is the convention. The terms of the infinite sum are the sum of a weighted sine and a weighted cosine with the same frequency. If you would draw these as phasors in the complex Argand plane you'd see that the result is again a sine, but with a different amplitude, and phase shifted. Therefore the equation can also be written as

So we have the sum of sines, all multiple frequencies of a fundamental frequency \$\omega_0\$, each of them with its own amplitude and phase.

Fourier proved that you can describe every repetitive function this way. Sometimes the series is infinite, sometimes it has a finite number of terms. Sometimes terms are missing, which means their amplitude is zero.

One of the best known Fourier series is that of a square wave:

So this is such a series with missing terms: a square wave has no even harmonics. The following image shows what it looks like in the time domain: 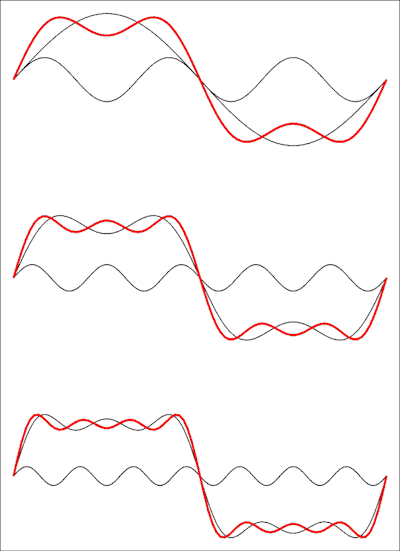 The top drawing shows the sum of the first two terms, then a third and at the bottom a fourth term is added. Each added term will bring the waveform closer to a square wave, and you'll need the limit of the series to infinity to get a perfect square wave.

Sometimes it's difficult to see the fundamental sine in it. Take for instance the sum of a 3Hz sine and a 4Hz sine. The resulting waveform will repeat once every second, that's 1Hz. The 1Hz is the fundamental, even if its amplitude is zero. The series can be written as

If a signal is periodic, has an "infinite energy", but a finite average power, then it is a "power signal".

Periodic signals that do not have finite average power do not meet the Dirichlet conditions for the existence of the series expansion.

There is an important trick to solve such problems. If you have a standard transform pair and you just interchange the variables \$t\$ and \$\omega\$, then you can just use your table if you know the following:

This is a consequence of the fact that the Fourier transform and the inverse transform are essentially identical, apart from the factor \$2\pi\$ and a minus sign in the exponent. This is exactly what you see in (1): you get a factor of \$2\pi\$ and you have to invert the frequency variable \$\omega\$.

So in your case the standard transform pair is

from which you get using (1)

PS: The mistake in your calculations is in the last derivative. You compute the derivative as if you considered the function \$e^{-\omega}\$ instead of \$e^{-|\omega|}\$. The correct derivative is

which gives the answer

which is of course identical to (2).