I am designing a simple current limiter, which charges a large (4.7mF) capacitor with a charge current of (roughly) 500mA from a supply voltage from about 10-20V – see the below circuit.

My dilemma is that I already have a bunch of MMBT2222A and it would be nice to use this part without another line item. Whilst it can happily push 500mA through the collector, it only has a power rating of 350mW, which will be massively exceeded when the capacitor is first charged as the voltage across the collector will be about 10V and hence the power will be about 5W for the first 200ms or so.

In the circuit above, I have added an extra 2N2222A in parallel (with the idea of adding more as required) with the existing one, but I feel this strategy if fraught with danger – mismatched gains will cause unequal currents and defeat the whole purpose of the exercise.

So, is there a clever way to achieve this circuit? Or, do I just have to bite my tongue and put a transistor in place with a better power rating?

Use a small emitter resistor to counter difference in transistor gain like this: 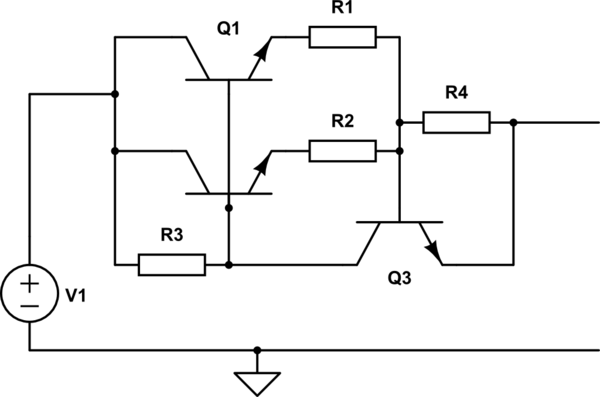 To calculate how much power is dissipated by the chip at a certain current, we look at the saturation voltage for the outputs. If we select the 350mA Ic value, we see that it can be up to 1.6V. So the power dissipated will be 0.35 * 1.6 = 0.56W, which is pretty close to the package limit. At 500mA continuous we will need some heatsinking to meet a 70°C max ambient rating.

You don't say if the 700mA is for each string of LEDs or for the total of 4 arrays. Either way though, paralleling the ULN2803s is not a good idea. The darlingtons have a high saturation voltage and bipolar transistors are not good in parallel due to the possibilites of thermal runaway. EDIT - the above is for separate ICs, if you are using pairs from the same ULN2803 then (as m.Alin points out) the datasheet says this is okay (as the transistors are well matched and thermally linked) Still, the overall current level (I'm assuming 4 * 700mA = 2.8A) is too high for the ULN2803.

A better idea would be to use some MOSFETs - you can get logic level MOSFETs that can be driven directly from the Arduinos PWM outputs, and will have a very low Rds and hence low power dissipation. Something like this has an Rds of only 25mΩ at 4.5V gate drive, and can handle up to 6.7A drain current. At 700mA the dissipation will only be I^2 * R = 0.7^2 * 0.025 = 12.25mW. 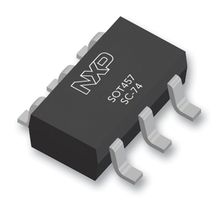 Because of their thermal characteristics (gain and leakage rise with temp) and variable gain, some form of control is needed when paralleling bipolar transistors. An emitter resistor to provide negative feedback is one scheme that is commonly used:

When a transistor heats up and draws more current, the voltage across the emitter resistor rises, stealing voltage from Vbe and keeping things from running away. You would size the emitter resistor according to the maximum current you want. Also, having all transistors mounted on the same heatsink is a good idea. In general though, unless there is a very good reason for using bipolars, use MOSFETs.

To demonstrate what the emitter resistor does, have a look at this circuit: 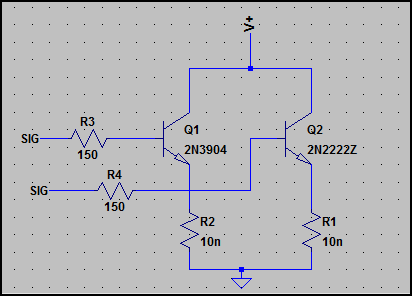 The input voltage (SIG) is 1V.
Both transistors are of a similar type, but we will sweep one's gain from 50 to 500. There are no emitter resistors (set to 1 nanoOhm so the effect is irrelevant)
This is a very crude representation of what might happen when one gets hotter than the other (it's difficult to simulate thermal runaway effects in SPICE, and I didn't have enough time to create/find an appropriate model to simulate it transiently)
Anyway, here is the simulation:

We can see the collector currents are quite different (to be expected) and if uncontrolled the transistor drawing the higher current may go into thermal runaway, as more current -> more power disspated -> higher junction temperature -> higher leakage/gain -> more current -> repeats...

Now if we add a 10Ω emitter resistor to each transistor and simulate again:

We can calculate the emitter resistor pretty easily. Say we want a maximum collector current of 100mA, and the base-ground voltage is a maximum of 1V. The base-emitter drop is maybe ~0.7V, so there is 1V - 0.7V = 0.3V left for the resistor. So:

The above is simplified, but should give you the idea. Thermal effects will alter various parameters, Vbe changes with temp/current, etc. Ultimately you just want to make sure that the process of thermal runaway cannot start, so limiting the gain in some way is necessary. Since the transistor gain is finite the lower the base resistor, the less of a "hard" limiting effect it has (however this is not too important for many applications as long as it stops runaway)

One, that switch does not directly control the motor. It's most likely a few mA at best, as it signals a microcontroller inside the cdrom to open/close the tray.

Two, what you are looking for is simple ohms law. Resistor = (Source Voltage - The Transistor Base/Emitter Drop) / Current Required in Amps. Since the hFE or current multiplication ability of the TIP120 is 1000, so roughly it will allow 1000 times the base current at the collector, any amount of current should be good at the base. Let's just use 5mA. The Base/Emitter drop is 1.25V minimum, as there are two transistor diodes.

Update To further answer the question, you calculate the base resistor within the safe range of your source (Arduino, 40mA per pin, 200mA total at any given time). The unknown collector current in this case would be minimal for a button. For actual loads like a motor, you could simply max out the transistor by saturating it, giving the base transistor as much current as possible. In this case, you would have to have multiple arduino pins in parallel since the TIP120 base limit is 120mA and the Arduino is 40mA per pin. This is not ideal because you don't know the current at C-E or the amount of voltage it will drop.

The best answer is that you DONT. A proper design will find out how much current will be at the collector. Use a ammeter or multimeter in current mode to find out.