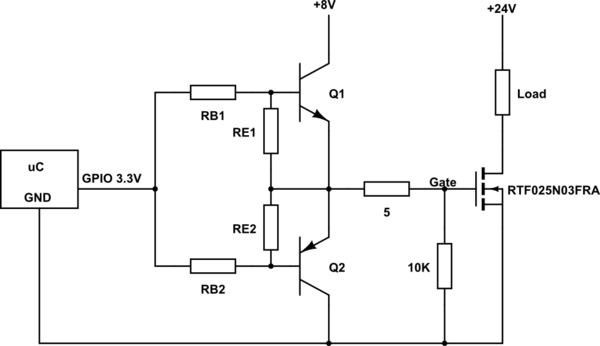 I want to make a Transistor based Push Pull Stage to drive a 30V Mosfet.

uC GPIO drives the transistor stage with 3.3V and GND to Turn On and Turn Off the Mosfet.

In datasheet, Mosfet has a 1.5V to 2V Threshhold voltage range.

When GPIO turns the NPN Transistor ON to Turn ON the Mosfet, Gate has maximum 2.7V because of base-emitter diode and this 2.7V is not sufficient to drive Mosfet in Saturation region to allow sufficient current through Load.

I suspect it could also raise the Temperature of Mosfet being driven in Ohmic Region.

how could I have more voltage on Gate ? or should I search another Mosfet with very low threshhold voltage ?

Thanks for your suggestions.

Mosfet replaced with that of one with lower threshold voltage.

NPN and PNP transistors changed with those having integrated biasing resistors as well.

Get hold of a MOSFET driver like the IR2110 and ditch the BJTs because that circuit will never perform well. 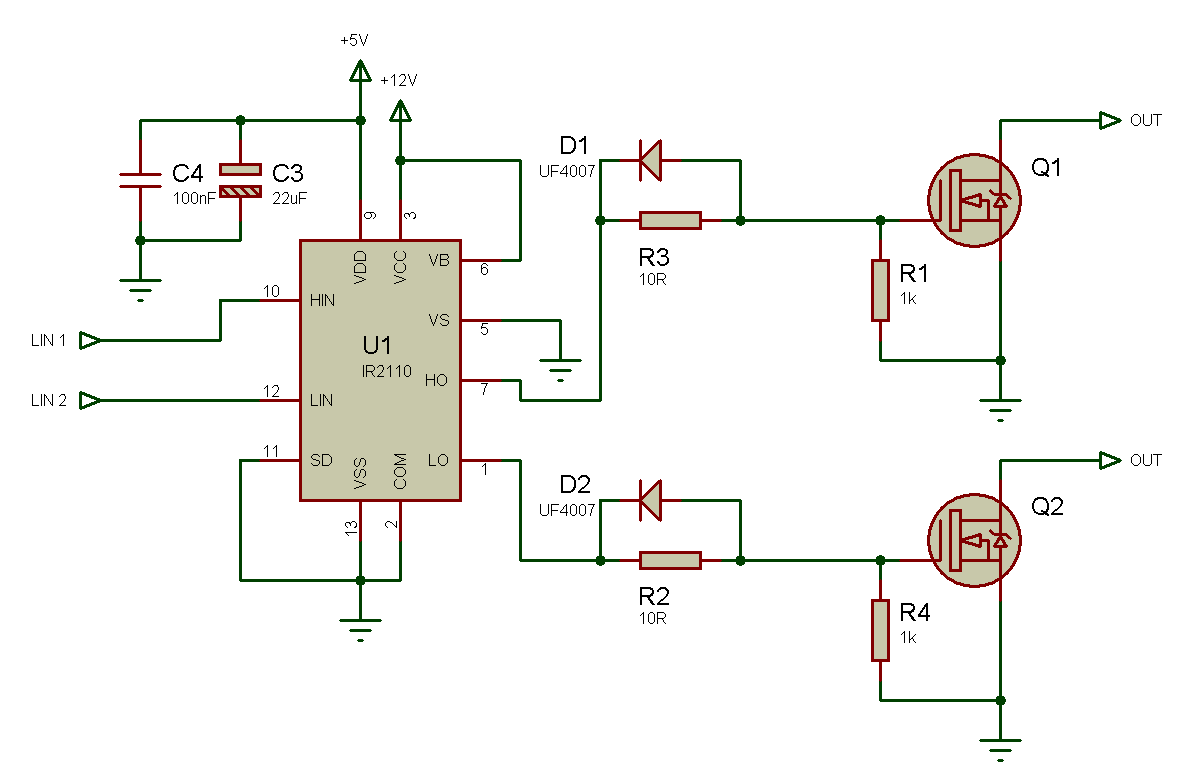 I'm sure you can find a single channel version of a similar device.

There are some open questions, but I'll take a stab at answering. I'll assume you want voltage control of a load that must be ground referenced, the voltage range is 0-45V, a 48V supply is available, the maximum current is 1A, and the control input is a voltage from 0-5V.

Here is a circuit that fullfills the requirements I stated:

This is similar in idea to Russell's circuit with a few key differences. Q2 is a controlled current sink linear with the opamp output voltage in the range of about 600mV to 5V. This current variably turns on PNP transistor Q1. The opamp output from about 600mV to 5V maps linearly to the load current, which should help stability. The compensation cap C2 working against R2//R5 provides a means to add additional stability as needed. C2 shouldn't need to be more than a few 10s of pF.

With 5V on the base of Q2, the emitter will be about 4.3V, so Q2 will sink 70 mA. Assuming the power transistor Q1 has a gain of at least 15 (in the plausible range for this type of transistor), the load current can be up to 1A.

R2 and R5 divide the load voltage into the 0-5V range the opamp can handle. Since stuff happens, you want to make sure all is OK with the full 48V at P1. This 48V divided by R2 and R5 becomes 4.75V into the opamp. That's close enough to 5V to use most of the range but still leave a little margin.

You will have to think about the power dissipation of Q1 carefully. It could be quite a lot depending on what current your load really draws. Worst case the load voltage is half the supply, so 24V, and drawing 1A. That puts 24W on Q1, which is quite a lot. If your load really can draw up to 1A, then Q1 probably should be a TO-3 with a good heat sink and forced air cooling. If that's too much, you need to consider switching topologies to accomplish what you are doing. 24W is not trivial to deal with.

Q2 could also get toasty, but nowhere near as bad as Q1. At the maximum of 5V on it's base, it will drop about 43V at 70mA, which is 3W. That's not too hard to deal with, like a TO-220 with a small heat sink. Of course if your load doesn't really need 1A this all scales down linearly.

I updated the schematic to get rid extra resistor in series with the opamp negative input. The circuit evolved as I was drawing it and I didn't notice this resistor was no longer needed when the circuit was posted originally. The description has been updated accordingly.

Yes, your calculations are correct. However you're limiting the Gate swing on the Mosfet and thus limiting it's operational range. I'd throw D1 on a parallel output from U2. Clever idea but not advised.

And yes, the PMOS is backwards, hat tip to @SomeHardwareGuy & @DaveTweed.