I started studying Electric Circuits one week ago so this material is new to me. I was trying to solve this problem from the book but I had some difficulty:

Your book is wrong, and you are right: 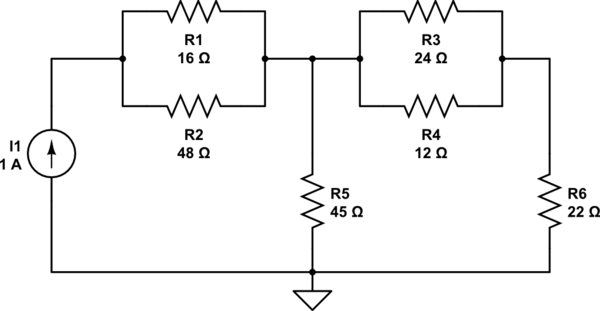 This trick is very useful when you have tons of exercises with no solution, plus you learn how to use a simulator (use some spice flavour). Of course you should always solve the exercise by hand and, if you are not sure your result is correct, check it with the simulator. Learning how to deal with circuits without the help of a computer is a necessary base for an EE, don't be too attracted by the simulator.

To clarify, I am interested in equivalent DC resistance in an arbitrary network made of resistors only. How can we prove that the resistance Rab is not higher if we connect nodes C and D with any resistor?

I believe it is the case that to increase Rab, the added resistor must be in series with any of the other resistors thereby increasing the resistance of that branch.

But, this would create a new node in the circuit.

Since your problem requires that the resistor be placed across two existing nodes, this added resistance is in parallel with the equivalent resistance between those nodes thereby decreasing the resistance of that branch.

To see that the Rab must decrease, consider terminals A & B to be port 1 and terminals C & D to be port 2 of a two-port network.

Looking into port 1, the equivalent resistance is, in terms of the Z parameters:

where \$R_L\$ is the resistance of the resistor to be connected across port 2 (here the impedances are all real and positive since this two-port is a network of resistors.)

Actually this is not a complete prof as we don't know that z12 and z21 are >0. How can we derive that? We actually just need a prof that z21*z12 is greater or equal zero.

I quote from your problem statement: To clarify, I am interested in equivalent DC resistance in an arbitrary network made of resistors only.

Thus, we do know that all the impedance parameters, for a network of resistors only, are real and positive.

Even if all elements are resistors z12 can be real and negative! For example just change the direction of I2 and you will have new Z12 = - old Z12.

The following defines the Z parameters.

If you'll stop to think about this a bit, you should see that the Z parameters are real and positive for a resistor network.

For a worked example, see this.

Observe that in the original circuit the resistors R6 and R7 are short as they have a wire connecting their ends. You can just replace them with a short. Replacing it with a short you are left with R4 and R5 in parallel. It should be fairly easy to solve from here. It is