My test setup consists of a reading device with a sensitivity of -70dBm and an antenna gain of 6dBi. I made a frequency sweep across 700 – 1200MHz bands, the device sends a query command (ISO 18000-6C/ISO 18000-63) at increasing power levels (power step = 0.1dBm up until 30dBm ERP) until the transponder responds. Path losses have been measured beforehand so after this frequency sweep, the read range and the backscatter range can be calculated (see figures below). 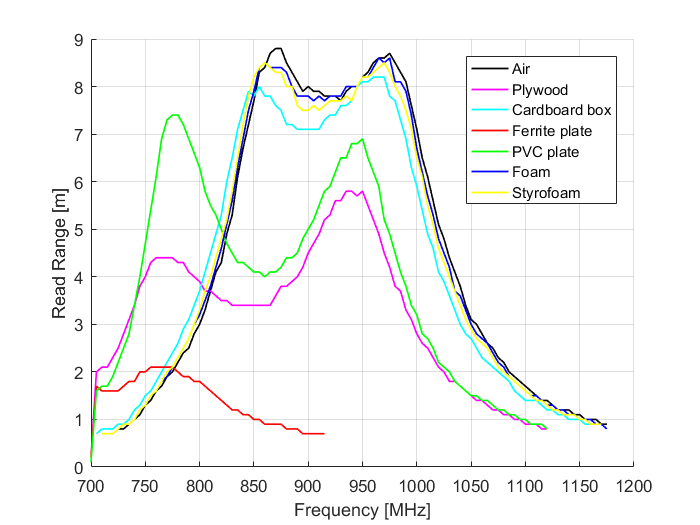 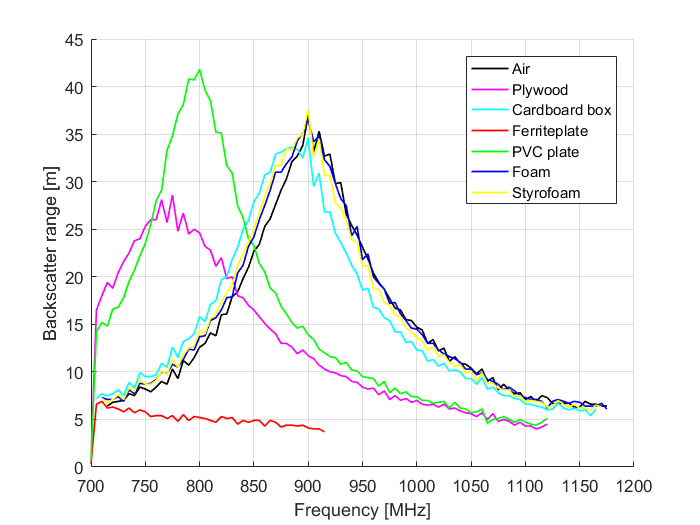 What I do not understand is why the curves are fundamentally different. I would have expected them to be at least a little similar. There appear to be two resonance points in figure 1 while there is only one in figure 2.

Another point to consider is that plywood and the PVC plate seem to have a strong detrimental effect on the reading range even though the permitivity of those materials should be closer to 1.

Edit: There seems to be a smaller, rectangular loop on the tag, is one of the resonance points appearing because of that?

Effective backscatter power of tag when answering to a command: 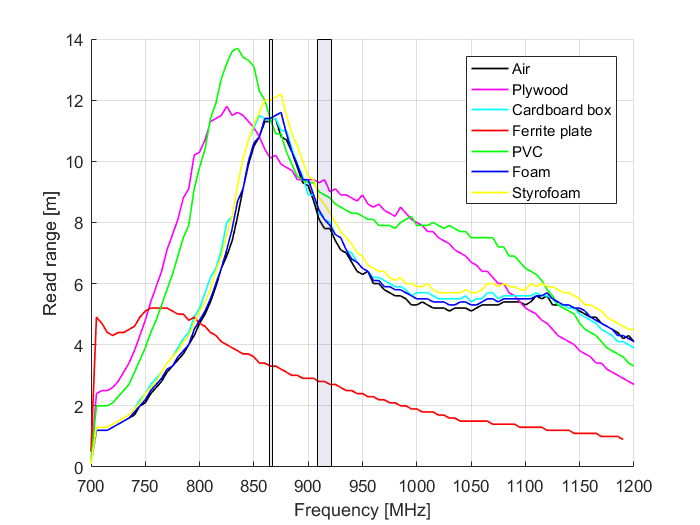 You don't give much detail on your experimental setup or indeed what you've exactly measured, and you mention these figures are calculated.

In the first case I think you're measuring the ability of your transmitting antenna to couple energy into the receiving antenna, and you get the classic two peaks you'd expect with two loosely coupled [somewhat] tuned antennas.

If I understand your second graph what you're showing is the sensitivity of your antenna and receiver to receive backscattered signal, so this is the merely response of your receiving antenna and amplifier. There's no coupled system and you get a single peak corresponding to the response of your [somewhat] tuned antenna.

PVC and Plywood do not have permittivity near one, it's more like 3. Your other materials (apart from the ferrite) are mostly air and have a permittivity of near 1. (depending on the type of PVC, PVC can also interact in odd ways at microwave frequencies)

Actually you can see the permittivity effect quite nicely, for your received signal (2nd graph) it lowers the tuned frequency, and for the coupled graph you can see it affects the position of only one peak (the slight motion of the second being due to compositing it with the rapidly falling tail).

Electronic – Why can a UHF RFID antenna read a LF tag

Generally RFID operates on near-field interactions. This is language that make something simple sound much fancier then it is. When you are in the near field of an antenna any coupling is due to capacitive and inductive coupling.

Most antennas for such a system are actually just large loops of wire and the tag often has a similar construction. The communication is exactly like coupling an AC wave through a transformer. So the different frequency still works through the transformer. The only issue you will have is if the frequency is too high to couple efficiently.

I'm going to examine the maths of transmitting power from a point source (the reader antenna) and assume the passive tag has an antenna that can pick-up, rectify and re-use a fraction of this power. This doesn't consider near-field effects/benefits (these may save the day but my gut feeling suggests they won't).

The reader antenna is pumping out +20dBm - that's a power of 100mW and assuming that is transmitted in all directions and your tag's antenna has an effective aperture\$^1\$ of 50 sq cm, the question is what amount of power can the tag "liberate" from the "ether"?

It doesn't sound much but, this power can be stored (and accumulated) for about a second or so and build up enough energy in the tag's circuits enabling it to vomit a short response. That's all that is needed for this to work.

Now, we can say that the power received is 10 times larger at 4.3mW and this is beginning to sound reasonable but, the transmit field is much more restricted in shape but hopefully this isn't a problem.

As a side note 4.3mW across a 50 ohm load equates to an RMS voltage of nearly half a volt RMS and of course energy harvesting technology could easily reap enough energy to make a short but useful tag transmission.

What about getting it to work at 10 foot (304cm)? The effective power is now 1W because we are using an antenna with 10dBi gain. The area of the sphere is now 1.16 million sq cm and the fractional power hitting the tag antenna (50 sq cm effective aperture) is a measly 43 micro watts.

Will this work? Could it work? If the 43 \$\mu watts\$ were received across a 50 ohm resistor the voltage would be about 46mV RMS - I don't think any energy harvesting circuit will liberate anything from this.

Conclusion - A passive tag won't work at ten foot - it would need to be powered by a small button-cell and it's MCU would need to wake up every 1 or 2 seconds to see if there was something potentially being received.

\$^1\$ The effective area of a tag's antenna is just an estimate on my part based on a little experience and the frequency the system it is operating on. Theoretically an isotropic antenna operating at 900MHz will have an aperture of \$\dfrac{\lambda^2}{4\pi}\$ which is \$\dfrac{0.1111^2}{4\pi}\$ which equals 8.84 x \$10^{-3}\$ sq metres or 88.4 sq cm. I've assumed the actual antenna's aperture is 50cm. This is somewhat less than an isotropic antenna despite the liklihood that the tag antenna will likely have gain/directionality BUT it will also have a poor efficiency because of it's tiny size and construction. A "real" quarter wave dipole antenna will be 8cm long which obviously is unattainable in a small tag.