In relation to a previous question, I'm trying to understand the USB 2.0 requirements for inrush current. I understand the basic idea, but a few details are still unclear to me. The specification states, in part, that:

The maximum load (CRPB) that can be placed at the downstream end of a cable is 10 μF in
parallel with 44 Ω. The 10 μF capacitance represents any bypass capacitor directly
connected across the VBUS lines in
the function plus any capacitive effects visible through the regulator in the device.
The 44 Ω resistance represents one unit load of current drawn by the device during
connect.

If more bypass capacitance is required in the device, then the device must incorporate
some form of VBUS surge current limiting, such that it matches the characteristics of the
above load.

The USB-IF also provides a description of an inrush current test:

Inrush current is measured for a minimum of 100 milliseconds after attach. Attach is
defined at the moment the VBus and ground pins of the plug mate with the receptacle.
Any current exceeding 100 mA during the 100 ms interval is considered part of the inrush
current event. The inrush current is divided into regions. A region is an interval
where the current exceeds 100 mA until the time the current falls below 100 mA for at
least 100 µs. There can be multiple inrush regions during the 100 ms period. Pass/fail
is determined by the region having the highest charge.

That is explicit as far as it goes, but it only gives a minimum measurement time, and it doesn't spell out what algorithm is applied to the inrush regions to come up with a pass/fail decision. I think the idea is that during the regions when the current exceeds 100 mA, the current is integrated to get the total charge transferred during this window, and the total charge must not be greater than what you would get with the 10 uF // 44 Ω load. According to one source, this would be 5V * 10 µF = 50 µC. That is where my understanding gets a little shaky.

To help me understand, I analyzed the following circuit: 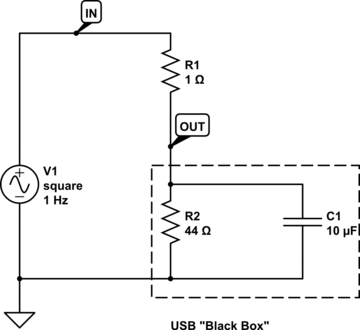 The total charge transferred at time \$t\$ will be

So the question, if you're still reading, is what does it mean, precisely, to "[match] the characteristics of the above load" (i.e. 44 Ω parallel with 10 µF), and how does the described USB-IF inrush current test decide how much current is too much?

The answer is: no one knows.

Well, someone knows, but the inrush pass/fail test is considered proprietary information and how that determination is made is not published by the USB-IF, for reasons that are theirs to know. I know that's not a very satisfying answer, but that's the simple truth.

To quote the electrical compliance tests page (the text is in red so you know they're even more serious than the normal level of USB-IF seriousity):

So they are explicitly saying that you cannot make the determination using a waveform capture alone or several oscilloscopes' "USB inrush test" feature (I've never seen this, so I must not using expensive enough oscilloscopes) not valid and the only way to meet inrush current compliance is if USBSET20 says your device meets compliance. It takes in .tsv/.csv waveform capture data and poops out USB compliance justice (in html format).

To elaborate further, they only tell you the minimum measurement time because that's all you need to know. You don't need to know how the actual pass/fail determination is made, and indeed, they aren't telling. The USB-IF is willing to tell if you if you are in compliance, but they aren't telling anyone how they actually determine that (at least for inrush current).

That maximum downstream load is a specification relevant to an upstream device (host port or hub), meaning when designing one of those and NOT a peripheral, then that hub or port should be able to withstand a maximum downstream load of a 44Ω resistor and a 10µF capacitor in parallel. And you're absolutely correct - this could draw as much as 25mA over the 100mA limit under the most extreme conditions. As such, an upstream device must be able to handle such a load ("handle" meaning not suffer more than a 330mV droop) being connected.

However, if your peripheral were such a load, it would not pass compliance because it will draw over 100mA at some (essentially all) of the possible voltage range. That load is meant entirely as a worst-case design scenario for upstream devices, and is used to test them. It is not relevant to a peripheral inrush current compliance test.

What is relevant is that is not really about the current. It's about charge, so you're already sort of on the right path with this. Specifically, it is about the voltage droop. An upstream port on a hub must have no less than 120µF of very low ESR capacitance on its output VBUS, the bus powering downstream peripherals.

Let's do some math. an unpowered upstream hub must have 120µF of downstream capacitance. At 4.4V*120µF, that's 528µC of charge. A device connected has a 10µF capacitor. If you pretend that there is no static load or power, just a charged capacitor on the port, and an uncharged 10µF one in the peripheral, charge will be distributed not until the other is full, but until the voltage between them is equal. Charge is conserved, so the point at which the two capacitors voltages will equal each other, given 528µC of starting charge, is roughly 4.06V. Or, 40.6µC transferred. Add in the connector resistances, and the downstream capacitor will not even be able to draw that much charge during inrush.

So, literally the only important factor is that it does not exceed 10µF. Current is not really the thing that matters, its how depleted the hub's downstream port capacitance can be depleted without drooping more than 330mV during the transient before things like cable inductance give time for the actual host power to catch up. And a 10µF capacitor is the closest available value that won't do that.

Also note that there is no capacitance limit. You can have 1F of all ceramic capacitance on a downstream device, as long as you have it divided into 10µF sections, and only one of which will connect on attachment. Once the device is attached, you must stay below any 10µF step, but you may gradually "online" more capacitance in 10µF increments. The whole point is avoiding that transient.

And yes, this means a low-power peripheral is not only supposed to work down to 4.35V, but also withstand a 330mV voltage droop transient, such as when something new is connected to a hub. This also means that, theoretically, if you plugged in two devices at JUST the right times so as to be nearly simultaneous, you could possibly disrupt operation of other devices on the unpowered hub. I'm sure the robots, with their HPETs, will exploit this critical flaw in our USB bus specification to bring about our downfall.

Now, there are probably other subtle aspects like dI/dT rates or whatever else. Who knows exactly what is incorporated into the pass fail test. Considering that they have an entire 7.5MB installer for the program that performs that test, its probably safe to assume that its not something simple. But just keep in mind that you are trying to avoid over depleting upstream capacitor reservoirs with your own downstream capacitance, and that's really all there is to it. As long as you don't cause other devices to fail due to the voltage transient your peripheral could potentially cause, you'll be ok. And really, it just amounts to keeping the capacitance seen on attach or other power state changes to 10µF. It actually would be better to try to have less than that, 10µF is the maximum. I don't know where the idea started that the absolute maximum should be the 'standard' capacitance started, but good engineers know better than to go for maximum ratings. Always underrate. I like a nice 4.7µF capacitor. If you need more decoupling, all you have to do is not connect it directly to VBUS and limit it to 100mA surge draw and you're golden. But you're allowed far in excess of 100mA - as long as only 40.6µC worth of charge is transferred during a region.

"Properly" you should provide device side current limiting.

Worst case you can dip the power rail and cause an outage on other connected equipment or cause startup problems with the device you are connecting.

In practice I'd expect that most systems will survive plugging in capacitors substantially greater than 10 uF. However, if this did cause misoperation or even damage in practice you would have no grounds for complaint.

10 uF would have trouble pulling the skin off most rice puddings and even say 100 uF is not a vast amount of capacitance*.

But, if you did want to provide startup protection you should be able to achieve this with 1 x MOSFET, 2 x R, 1 x C and an optional diode.

The MOSFET is in series with the large capacitor - call it C1.
When power is off the MOSFET is off.
Place a resistor R2 across FET d-s to provide some startup current if desired.
Place a timing cap C1 from gate to source and a turn on resistor R1 from gate to supply.
At turn on the MOSFET is off. FET gate rises (or falls depending on whether low side N Channel or high side P Channel) and FET starts to conduct and then is fully conducting. By making R2 suitably low and turn on time delay from R1, C1 long enough the main cap can be charged mainly via R2. This is not essential but without R2 the FET needs to transition from off to on slowly enough not to cause inrush problems (still).

For your particular purpose, you don't need to do anything, just connect GND (black wire) and VBUS (red wire) to your design.

(2) don't worry about any "low" or "high" power modes. These modes are for host to supervise and police overall power that host believes is available to supply. It never worked correctly. If you don't pull any data wires up, the host will not even know if your cable is even plugged in.

(3) Do not worry much about 10uF limit. In worst case you might get "port overcurrent" message on a host, but it is rare. Or you might disrupt other USB devices that might be working in adjacent ports. But there are plenty of DC-DC converters that use input caps of 10uF or less, so it is advisable to use a better DC-DC converter in your design. If you are not using any DC-DC de-coupling from VBUS supply line, it is a very bad idea for a sensitive analog design.

Regarding the BC1.2, forget this completely. All you need to care is not to exceed 500mA DC limit.

Clarification for (2): The OP is not building a USB device. The 100mA is a requirement for USB devices, not hosts. The OP wants to use the port capability of a USB host. Every host port must have an ability to supply 500mA, regardless if there are "low" or "high" powered devices. So 500mA is always fine. If the port will be behind a bus-powered hub, there could be a different story.