I'm trying to simulate a buck converter IC in LTSpice (MP4569) based on the functional block diagram from the datasheet using behavioral voltage sources to represent the logic from the block diagram. 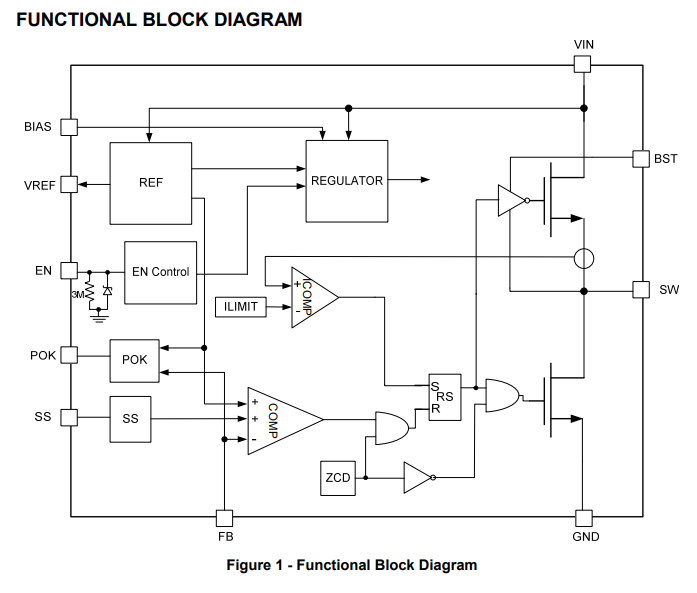 I have 2 switches in place of the high and low side mosfets and the switches are driven by behavioral voltage sources.

I'm trying to implement the zero current detection block (ZCD block on the diagram) with a behavioral voltage source with the condition comparing the current to a threshold (V=(I(L1)>1m), the number is arbitrary, just a small near-zero value, could be zero.

The LTSpice model is available here. 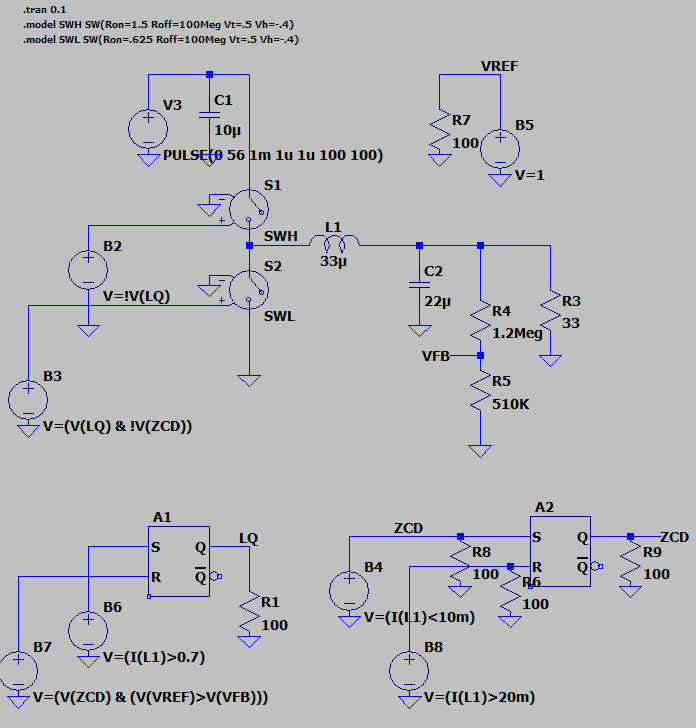 I end up having the output of the ZCD voltage source in the simulation to be always 0 (after the initial 1 in the very beginning), BUT the current in the inductance is oscillating (very small amplitude) just above the limit in the ZCD voltage source (whatever I set it to). Also the simulation slows down to a crawl at this point and never completes, I have to stop it. 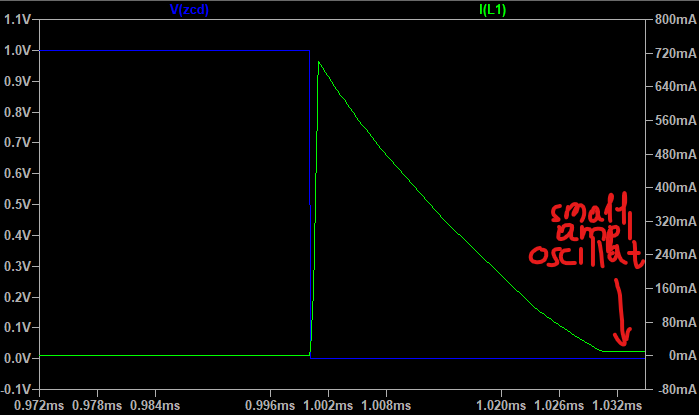 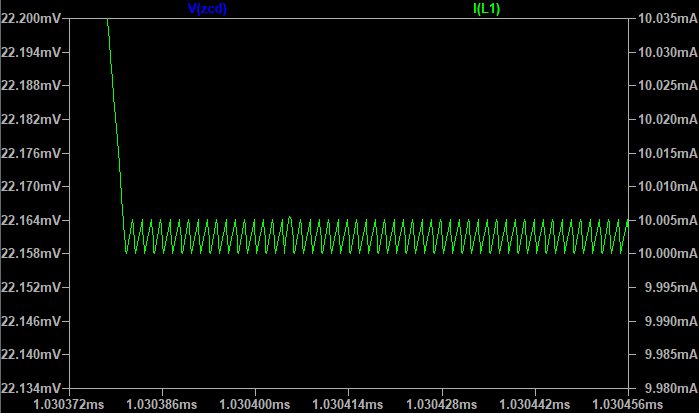 It appears that it does trigger the voltage source, but very briefly and it's not visible on the output when plotted in the simulation, but it does affect the behavior of the switch.

Maybe some kind of hysteresis is needed around the zero current for this ZCD voltage source, but I cannot figure out how to add it. I tried adding a flip-flop with 2 behavioral voltage sources connected to Set and Reset but it didn't help and I'm still getting similar behavior

Besides @Voltage Spike's answer, a warm recommendation would be to avoid conditionals in behavioural expressions like if(), buf(), etc (or other discontinuous functions like limit(), uramp(), etc), because the solver might get stuck with "timestep too small". They might work, they might not, they could be attempted to be "tamed" with some strategically placed small capacitors to help out the sharp transitions, but there already is a very convergent-friendly solution: A-devices.

For your case, you can replace these:

For the cases where you need to use a voltage, it's simple, just add the respective node to the input of the logic gate. For currents, since you're only using I(L1), you can add an H-source with L1 1 as value (which might be a better choice than a B-source).

On the bright side, the VCSW have their .model cards with a negative hysteresis and very acceptable range between the ON/OFF states, so that's a bravo from me.

With these, here's a quick remake:

And the .asc file, where I have only used td for the srflop; feel free to add tau and tripdt, they will only help:

Electronic – A question about negative dB in LTspice

What does -dB mean here for the current?

So when you have decibels for current as the Y axis then it is implicit that they the Y axis is dB relative to 1 amp (or dBI).

One further thing to consider is that the graph may be plotting peak current and peak current is \$\sqrt2\$ times bigger (for a sinewave). Read the LTSpice help advice to know exactly.

Sure, dBV are used and this is quite common and one website I visited compared decibels for current and voltage by calling them dB(volts) and dB(amps) - maybe "dBI" just isn't used so as not to confuse folk with dBi?

Hierarchical or subcircuits are the same, after LTspice flattens the netlist. You can see this by checking Generate Expanded Listing in the control panel, the Operation tab.

The advantage hierarchical schematics have is the direct graphical access through the symbol editing, where you can open its contents as if it were a schematic, and easily probe voltages, currents, powers (needs the two Save subcircuit ... options checked in Control Panel > Save Defaults). You can also probe inside plain subcircuits, but you have to check the expanded listing in the error log; it's more cumbersome, but not impossible.

Overall, hierarchical designs are more user-friendly, but the disadvantage is the lack of encryption. Subcircuits can be encrypted to protect the contents, hierarchical designs cannot be. The expanded listing does not work with encrypted libraries, which is to be expected, therefore you are not able to save and plot internal quantities. Also, a subcircuit is more compact, typically one file, hierarchical schematics can be more than one. Oh, and you won't see nice yellow symbols...

Both ways, hierarchical and plain subcircuits, allow for external parameters to be passed on, such as your Vs={Vcc} example.

None is faster or slower than the other in terms of computations for same designs, since, as I mentioned before, LTspice flattens the whole schematic into a netlist, which is nothing more than a programming language for SPICE.

Which one to use? Take your pick. In general, if you're working on the design, choose hierarchical for easy, graphical access, so that the end result can be transformed into a subcircuit that's ready to be encrypted, if you so desire.

As a subcircuit, I'd have access to the Components Attribute Editor and a few more fields for setting up parameters as opposed to the single PARAMS line that the hierarchical block uses

Those fields mean nothing in terms of netlist, and the names shown in the component attribute editor are also flattened: if you check the netlist, all the lines get cropped up into a single line that belongs to the subcircuit.

They are only meaningful as some combinations, in terms of the order in which they appear in that line, and which has differnent effects together with the symbol: in some cases, it's possible to prevent the symbol from being edited. See, for example, an opamp from the existing library and try R-Click, with or without Ctrl -- it will not let you. This goes hand-in-hand with the encryption of subcircuits, but not hierarchical designs.