With the LPC1343 microcontroller (Cortex M3), there is a USB_CONNECT line which goes low when the micro is ready to connect to the computer via USB. This "soft connect" feature is implemented on the LPC Baseboard with a PNP transistor circuit. Would I be able to use a p-channel mosfet instead? I have already built the p-channel mosfet equivalent, and it works, but wondering about its reliability and whether it is "good practice".

Possible issues that (I think) may arise could be due to the fact that mosfets are voltage controlled devices, and on power up of the device, the gate voltage may not rise as fast as the voltage supply (3V3) (although they are tied via a 33k resistor in my implementation), and the mosfet would erroneously "conduct".

Note: My p-channel mosfet circuit just consists of replacing Q1 with a p-channel, R69 remaining the same, eliminating R68, and changing R66 to a 33K (no particular choice, had one on hand) 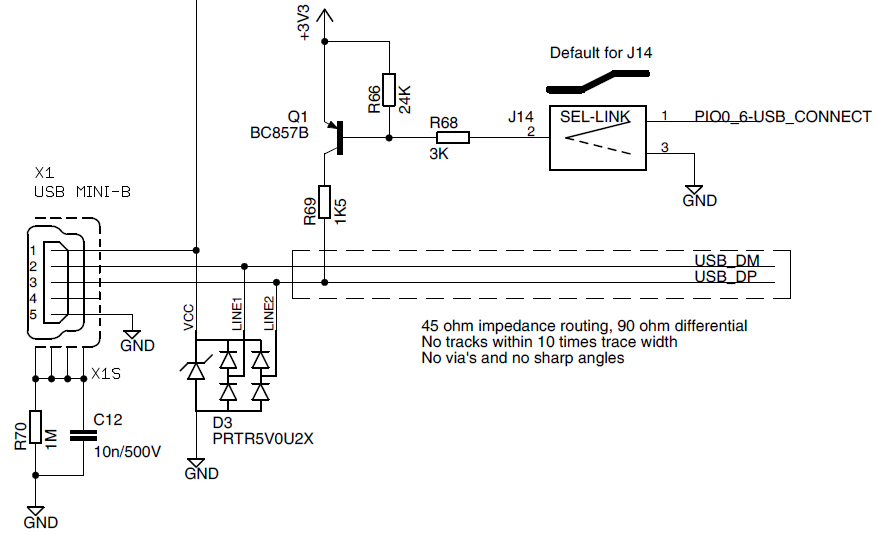 if the line is high when it is non-active(instead of floating) you should be able to remove the pullup and leave the 3k and have it work without modification.

When the P Channel has it's gate high it should be in cutoff, as you would want. When the gate goes low you can expect it to saturate, allowing full conduction through the mosfet like a short. MOSFETs are slower, you want to make sure you have one that has a switching frequency that is relatively close to the rate they suggest, but you should have no issues with this, the USB control will not be toggled at an extremely high rate(>10MHz).

The 3k resistor you have in series you can leave to avoid you pulling too much current when changing states, but it will probably work better if you reduce that a significant amount.

You want to make sure that the change in Voltage your output pin must drive divided by your resistance is less than the maximum current you pin can drive. This will protect your circuit without slowing the drive time of the MOSFET. The MOSFET is effectively a capacitance, so you can think of the capacitance with the resistance causing a delay to your signal (4 tau or 5 tau, depending on philosophy).

I think this is the graph of your datasheet that gives all the information you need: 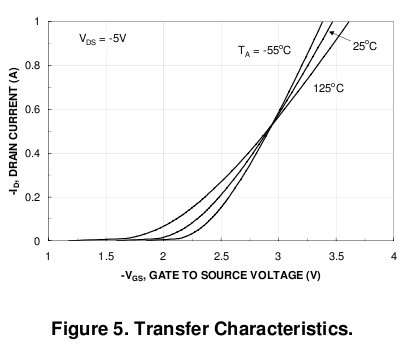 So assuming this circuit 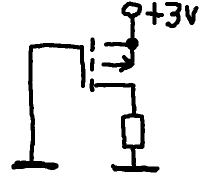 EDIT:
clabacchio is right pointing out that the graph is actually for V_DS = 5V.
Of course a graph for V_DS = 3V would be better, but there isn't one in the datasheet. So the question is: Will the resistance R_DSON be different for very low drain currents?
Looking at Figure 2 ("On-Resistance Variation with Drain Current and Gate Voltage") gives the answer:
it does change vs. I_DS, but only for currents above ca. 0.1 A and: resistance even gets lower (=better) for lower I_DS.

I suppose it could be made to work with a P-channel MOSFET, but I'm not sure what real advantage that would give. Is the voltage drop of about 0.2 volts over the transistor a problem? Probably not, and a P-channel MOSFET is likely more expensive than a PNP BJT, and this circuit is simple and works great.

To highlight one design hurtle to using a MOSFET, what happens \$V_{self}\$ is less than \$V_{bus}\$, but not less enough to reach \$V_{th}\$ of your MOSFET and turn it on? Also, the gate would be driven though a resistor here. If \$V_{self}\$ fails, will you be able to drive the gate low enough and fast enough to maintain power?

Not unsolvable problems by any means, but why bother thinking of them when the BJT works fine?