I'm looking for a variable AC power source for use in some electromagnetics experiments and longer term for testing inductors, transformers, core material frequency response, and that sort of thing.

I'm thinking my dream instrument would have voltage variable between 0-125V, be capable of providing a few amps, maybe 10A at low voltages (say 24V or less), accept an arbitrary waveform from my signal generator to determine the AC out (possibly including a DC offset), and have a frequency response from DC to say 10kHz.

I'm willing to compromise on all of those however, especially to get started. I already have a variable 60Hz AC supply, one of the Variac + Isolation transformer type. So the first big addition would be variable frequency.

I've done a lot of searching around on the web, and such a device seems to be difficult to find. The closest thing I've found is called an AC Power Source and these seem to have a limited frequency range, especially on the lower end, bottoming out around 45 Hz it seems. They also seem to be limited to sinusoidal waveforms. These have great power capabilities, but appear to be somewhat targeted toward mains supply simulation for compliance testing or whatever. At about $2k to get started, they're also a bit more than I wanted to spend for essentially academic/hobbyist purposes. Here's an example of one I found: 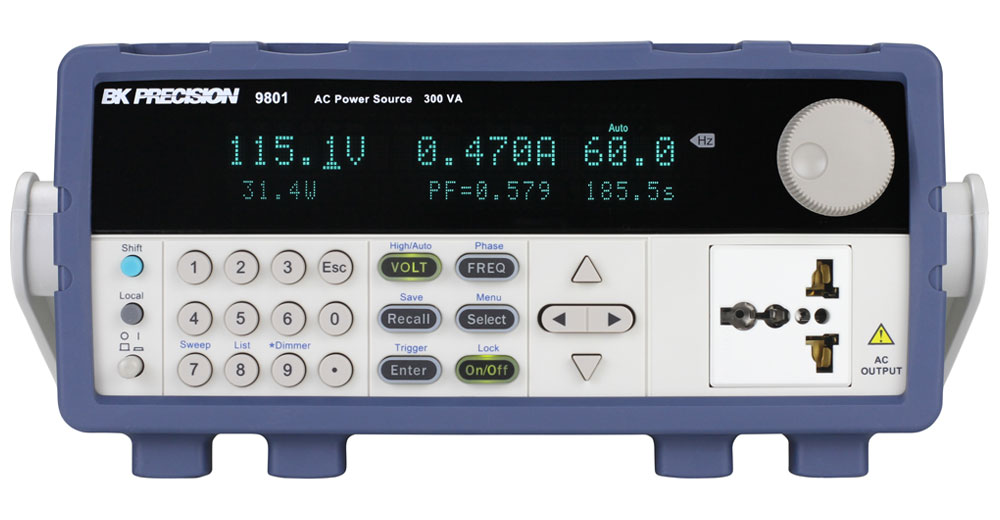 Based on this answer I'm inclined to think a possibly better approach would be to use an audio power amplifier. I think the frequency response would be good enough and taking in an arbitrary waveform is natural for such an amplifier.

I'm not sure about the peak voltage I'd be able to attain with such an amp, I expect it would depend on the source voltage (say 25 VAC in the amp suggested in the answer above). But I'm curious enough about that approach that I'm thinking about hooking up my 40+40W Pyle amp just to see what it can do 🙂

So I guess my question is this:

Look around for audio amplifiers in the 2kw / 3kw power region. I think you'll be surprised at the low price (I was).

What is advertised as a 3kW amplifier is usually a 1500w stereo into 4ohm loads that's bridgeable into a mono 8ohm load.

If you do the sums, that's a mono output capable of 150 vrms into 8ohms, as long as you are happy with a floating load, as the outputs are bridged. If you parallel the two stereo channels, that would drive a ground referenced 2 ohm load with 75vrms, or over 35Arms.

To buy a tranformer, even in the sub-kw range to convert a lower power amplifier's output up to the 100v region, is quite expensive (at least I was surprised by how much they tend to cost). With a transformer, not only do you have a lower frequency limit with voltage (core volt.seconds), but you also have an upper frequency limit with winding capacitance and leakage inductance, and core losses. I can't see a 'mains' transformer getting to 10kHz.

For your voltage, current and frequency requirements, I'd just go for a single commercially available kw audio amp.

WARNING just because it's audio doesn't mean it isn't dangerous. Even a 1kW amp can develop lethal voltages, and fire-starting currents. Take all the precautions with the output of such an amplifier that you would take with mains.