Im a total beginner. I bought an arduino starter kit and this is the first sample program – it makes an LED blink. The accompanying text gives no theory about what is happening in the sample programs so I have a couple of questions.

Here is the circuit – 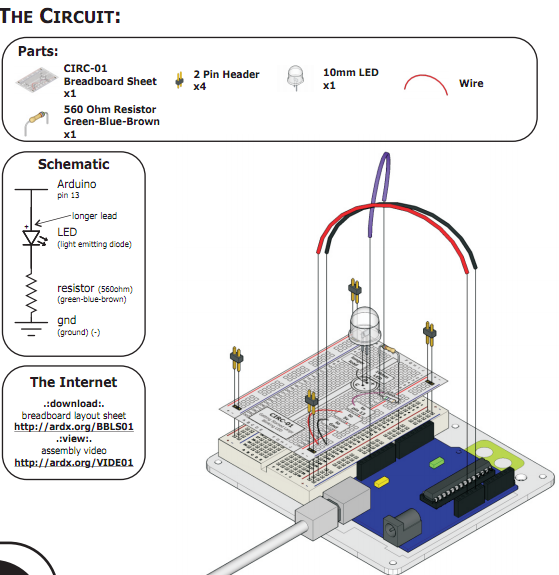 The LED requires a certain amount of current to light up. It also has a certain voltage that it operates. These are never the same as the 5v Arduino puts out through its IO pins. So, if the LED has a forward voltage of 2.2V and a maximum current rating of 25mA, and the Arduino puts out 5V, then we need to lose some of that voltage to get it down to 2.2V. The resistor does this for us.

We calculate the value of the resistor by using Ohm's Law, which states that:

Or, the resistance is the voltage divided by the current.

So, we can put those values into our Ohm's Law formula:

Which gives us the answer 112Ω

For the LED I picked at random above, you'd use a 112Ω resistor to stop it from going pop. As they don't make 112Ω resistors commonly (you can get any value made, but they cost shed loads), the next value up is chosen - typically 120Ω.

Without knowing the exact specs of your LED it's impossible to know exactly what resistor should be used, but a higher value resistor is safer than a lower value one (it just may not light up as bright) and around the 500Ω area is a reasonable value to cover most LEDs.

As for the ground connection - that is just another wire - the "return" connection that keeps the current in a loop. Just because it's called "ground" it doesn't make it special - it's just a reference point. The 5V in the circuit is actually "5V With Reference to Ground". All parts of the circuit marked with the ground symbol are all connected together - it just saves drawing in the wires.

How to reconfigure resistor value from a working circuit

You seem to have 2 different problems (unless they're the same one). The first is the hot resistor. According to the schematic, R4 is a 47 ohm, not 470, but that's OK, since the 470 ohm (R6) is less likely to overheat due to its larger resistance. The other problem is the red LEDs coming on.

Try this. First, disconnect the common R7/R12/R17 from Q2. All LEDs should be off. Set the input amplitude to zero. Now check the voltage across R4 and R6. R4 should be very low, while R6 should be about half the supply voltage. You've clearly wired something wrong. My first guess is that you've reversed Q2.

I notice that you have no power supply capacitor. Try adding a 10 or 20 uF cap from power to ground, and do it physically at Q1/Q2.

If, with the 3 resistors disconnected, any of the LEDs lights, you have a problem with that section's circuitry.

Relax. First off, the link does not necessarily point to a carbon assortment - the description does not say. What it does say is that the assortment replaces an earlier kit which did use carbon comps.

Regardless, for what you're doing there is no difference. The composition of the resistors has nothing to do with your problem.

And what is your problem? At a guess, you're reading the color codes wrong. I recommend you get a cheap mulitmeter (you can get them for less than $10 on eBay), and use it to check your resistor values.