I know there are similar questions on the site, but I wanted to ask it from a somewhat different perspective.

I know I can use (and have successfully used) a buffer (e.g. 74HCT125) powered by the same voltage as Device A to boost Device B's signals up to 5V. I'm not as sure of the best approach for the other direction though (i.e. dropping Device A's outputs to an appropriate level for Device B).

I've read the Sparkfun Tutorial on the subject. They offer a few ways to approach the "downward" level shifting. What is the preferred way of handling this aspect? Since I'm using SPI here, the classic MOSFET solution for I2C seems like overkill to me since I don't need bidirectionality. I like the Inline Resistor approach for its simplicity, but I am uncertain how to size the resistor. The CLK and MOSI pins of Device B are specified with V_IH_min = 0.7 * V_cc = 2.31V, V_IH_max = V_cc + 0.3 = 3.6V and with Input leakage current of max 0.5 uA.

That value seems ginormous to me (especially when the SF tutorial is showing values like 10 kOhm) … and that is just for the max input leakage current (no min or typical is specified) is there a flaw in my reasoning or calculations, or is this not the preferred way to interface the devices (e.g. the Diode method)?

If it matters, one case of Device B I'm thinking of is a 23K256 SRAM, but I'm trying to account for a variety of devices.

The leakage current is the lowest current that you can (notionally) get away with designing a divider to handle. You can and should take many times that as "load current". This will then swamp leakage current effects.

Ginormous resistor values will lead to long rise and fall time constants (when combined with the IC's input capacitance and stray capacitances) which you do not want.

If you want mono-directional driving and level reduction only then a resistor divider will work fine. 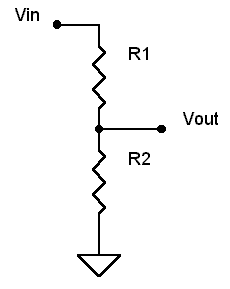 "All" that is required is to ensure that

1 Megohm x 1 picoFarad gives a time constant of 1 uS.
You can scale from there as required.

Referring to your 23A256 RAM as an example only

The 10 nS time constant with resistors i the 2k range translates to rise and fall times of several tine constants - so these approach the times involved per half cycle at maximum speed. As these delays will be included in all down converted lines the differences in delays should be much smaller. If using bidirectional transfer this may cause a problem with eg data setup or hold times. Looking at the data sheet in each specific case is essential.

ie I'd expect a simple low value resistive divider to work in many mono-directional cases but care will be needed at higher clock speeds. Referring to diagram above.

I think the easiest circuit that does what you want would use a N channel MOSFET like the bss138 and two pull-ups, hooked in the following way:

Tell me if it doesnt fit your needs, and why.

Having said this, I have to recommend you to take a look at the MAX3000 series of level converters. I have used them before and they are great bidireccional converters that "simply work" (in apple terms).

edit: It seems like the image appears broken with some browsers, you can see it here

It would be extremely easy to provide a pullup that was active only during initialisation and that "vanished" completely thereafter.

(1) An "active pullup" would be easier to "design" properly than a passive and could consist of a capacitor and a "digital" transistor (ie internal base resistors). So could be very small - two components plus actual pullup resistor. Adding another r or 2 may help get timing more predictable but 1R version should be OK.

On turn on Vcap = 0 so base input pin is at 0 so transistor is on.
Cap charges via internal base resistor.
When Cap reaches ~= V+ -0.5 transistor turns off.

Size /cost / values: See (2) below for capacitor sizing and cost, but note that a much smaller capacitor value may be used by choosing a much larger base resistor value to charge the capacitor than can be used with the passive design. eg a 10k base resistor would allow about a 1 uF cap and something as extreme as this ROHM PNP with 100k input resistor datasheet here would allow probably a 0.01 - 0.05 uF range cap. Available in 4 pkgs from SOT23 down to VMT3 1.2mm x 0.8mm !!! :-) for the terminally enthused. ).047 uF X5R cap can be 0201 (if desired) for equal amusement at under 1 cent

Transistor cost dominates here in this case at about 10 cents !!! but much much cheaper will be available.

(2) A passive pullup is probably larger and more costly as installation cost will predominate in volume manufacture. But:

This could "safely" be as little as

C1 starts with 0 charge so when V+ rises C+ is pulled to V+ and C- also. Cap now discharges via R1 so C-falls from V+ to ground. D1 isolates cap from pullup once cap is discharged. Pullup provides whatever value is required for bus. I2 R2 = pullup is say 5 to 10+ times as large as R1 then R1 will dominate discharge time.

Size /cost / values: If you need "a few mS" say time constant = 10 mS. Maxim say pulup should be about 4k7.
This is shown the same for parasitic powering and when Vdd is available so I strongly suspect that a larger value is acceptable when Vdd is provided BUT lets stick wityh 4k7. (Other issues is time constant od R oullup +_ parasitic capacitance on 1 wire bus).

Given the horrific price of the 1 wire IC you may not mind the few cents for the cap.