What are the differences among these, and in what circumstances would I use one or another?

The circuit you show should work as it is, since it is already for a phototransistor. Just leave your base lead floating.

EDIT - the breadboard circuit you have added looks correct (though it's hard to read..) so go ahead and try it. If it doesn't work let us know. Maybe change the resistor to 2k or larger if you are worried about blowing the LED.

Just to note this circuit will work fine, although Steven's suggestion is "preferable" in general. I would maybe not change things till you have it working.
The reason the circuit is usually not the best way to do this is because it relies upon Hfe, which can vary quite widely in a transistor and is subject to temperature changes. This means the base resistor must be chosen according to the particular transistor used.

The reasons it is picked for this circuit are as it uses 1 less resistor (for size purposes, see picture below) Also this circuit is designed for a 3V cell like a CR2032, which has a high internal resistance and generally cannot supply enough current to damage the LED (so it's like having a series resistor in place) The original project page explains all this. 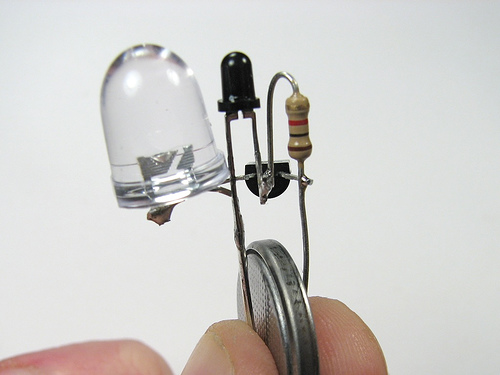 So if you are intending to eventually power this circuit from something else other than a coin cell, then you should go for the common emitter circuit Steven describes. The site you got the above circuit from also has an example of such a circuit: 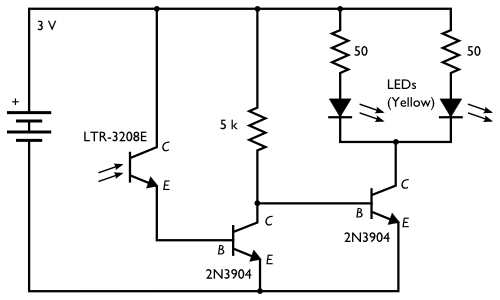 To help with the breadboard I just threw together the little circuit shown in your question. I only had an IR phototransistor but it doesn't matter much for this, it still works the same. Anyway here are a couple of pictures of it working, hopefully you can see how the connections go: 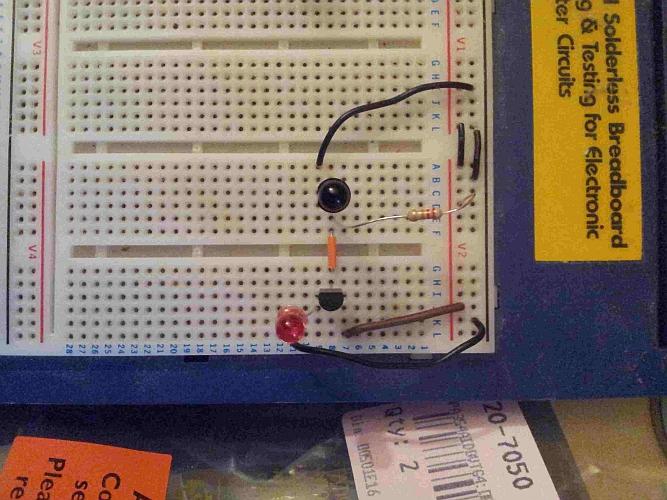 With the lights turned down a bit: 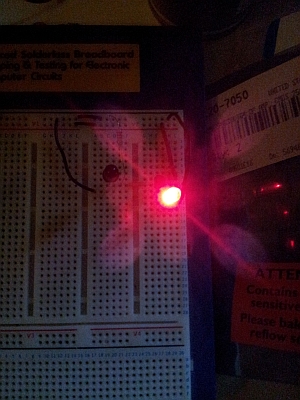 It actually works very well, off in normal light and starts turning on as soon as I start dimming the lights. You may have to try a few different values of resistor in your circuit to arrive at your desired setting.

Maybe you have a special reason for using opto-isolators but assuming that the 12V supply to the relay coils can have a common 0V or ground with the Arduino's 0V then using regular BJTs would seem more sensibile and of course will be more efficient. Below is not the exact circuit because it shows a motor but substitute the motor with the relay coil and this works: -

The supply shown (5V) can reasonably be anything such as 24V (if you had 24V relays). 12V is no problem of course. The transistor is an NPN and something like a BC547 is ideal. The base current should be designed to be about 5mA for decent saturation of the transistor.

If your MCU runs from 3V3 then approximately 2.7V will drop across the resistor at 5mA and this implies a resistance of 540ohms. A 470ohm or 560ohm will be fine.

Note that the diode across the motor/relay is always required to protect against back-emfs when the transistor turns off. For the relay current you have a BAS16 or 1N4148 will be fine.

If you have a reason to use an opto and you are happy with its current transfer ratio and power dissipation then using the opto will work too.