Locked. This question and its answers are locked because the question is off-topic but has historical significance. It is not currently accepting new answers or interactions.

Once I heard of Netduino I began to wonder which other systems would provide the same features:

TinyCLR produces several different boards that support the .Net Micro Framework, the most popular was once the Fez Domino, now deprecated and replaced by the Fez Panda II: 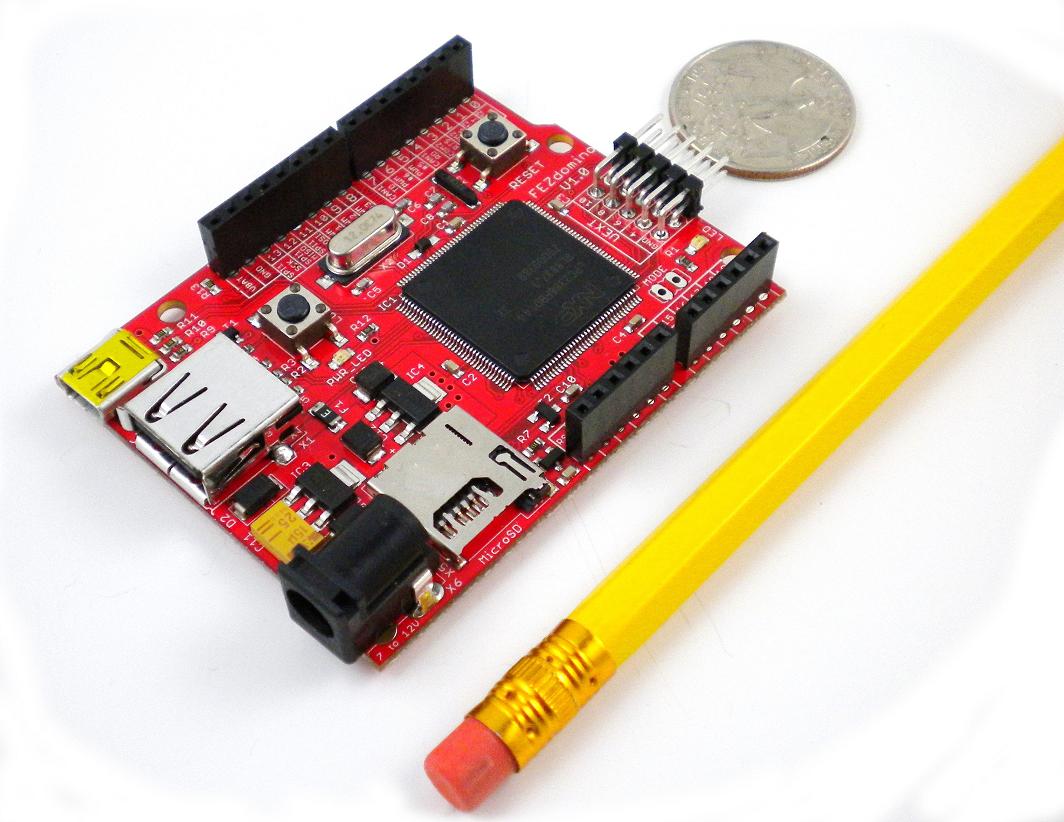 FEZ (Freakin' Easy!) is a tiny open-source board running Microsoft .NET Micro Framework. This means, you can write code with much more efficiency using C# programming language under free Microsoft Visual C# express. Build your next projects in minutes by connecting FEZ Domino to one of the shields or the many available components. Includes USB cable.

FEZ offers many features not found in Arduino, BASIC STAMP and others:

If you want to move from beginner to intermediate, the language you need to learn is C. Even if you put the whole Windows lock-in debate aside, you need to be very good at programming in C before you can do quality work on a microcontroller in a higher level language like .NET Micro or C++.

Embedded systems are composed of a pyramid of knowledge, and you really need to know at least some of each step to be a good designer:
^User code
^^Operating systems
^^^The C language
^^^^Assembly language
^^^^^Microcontroller architecture
^^^^^^Digital design
^^^^^^^Semiconductors
^^^^^^^^Basic electronics (Ohm's law)

The Arduino framework provides a convenient hook for hobbyists into the pyramid somewhere between the C language and an operating system.

Specific to your the .NET Micro Framework question, the About says:

The typical .NET Micro Framework device has a 32 bit processor with no external memory management unit (MMU) and could have as little as 64K of random-access memory (RAM).

Also, the brochure differentiates it from Windows Mobile, Windows Embedded, CE 6.0, and the .NET Compact Framework, and compares it to Linux, Real-Time, Java, and custom operating systems. This is a huge jump from the Arduino/Processing framework.

Your Arduino has an 8-bit processor with 1k of RAM. In addition to the 8-bit vs. 32-bit power loss, it also runs less than half as fast as most of the listed processors. While I wouldn't discourage you from moving to a 32-bit processor, I would recommend it as an intermediate-to-advanced move.

It's really easy to use up a lot of time and memory with a few lines in C# or C++, which are insignificant on a dual core processor running at a couple gigahertz with gigabytes of RAM, but which can make a huge difference on an embedded device. Until you are good in assembly language and/or C, or a guru in C# or C++, I wouldn't recommend using it for embedded programming.

So, I'd start with downloading WinAVR, and program a simple LED blink routine in C. If C is totally confusing to you, do a little bit of native code ("Hello World") on your PC, and then move to the microcontroller, but that shouldn't be necessary. Next, move up to communication over the UART, start using interrupts, and redo some of your Arduino projects in C. Then, find (or make!) a new development board with a different microcontroller, maybe a PIC or an ARM, and some goodies like an LCD screen, Ethernet, SD card, or whatever you want, and try to learn a new system. Once you get there, you'll know better where you want to go.

We'll be here to help you along the way!

Electronic – Can someone give me a basic parts list of required items for .net micro framework development

There is no such thing as 'required items'. You can stock up on some basic parts, however. You're very likely to need:

And if you're planning to actually build something: there are loads of questions about soldering irons/solder/... on this site; check those out.