I found a board by dumpster diving. I am almost sure that it is SMPS board. I didn't understand black strips at the bottom of the PCB marked by red rectangles. By the way, it is a single layer board with all thru hole components. I couldn't peel off them. They most likely on bare PCB like a solder mask layer.

Can anyone explain usage of this strips? My first thought was isolation but i am not sure about it. For example, the rightmost one is wierd. Does it provide an extra isolation layer in addition to the solermask between traces and legs of component? 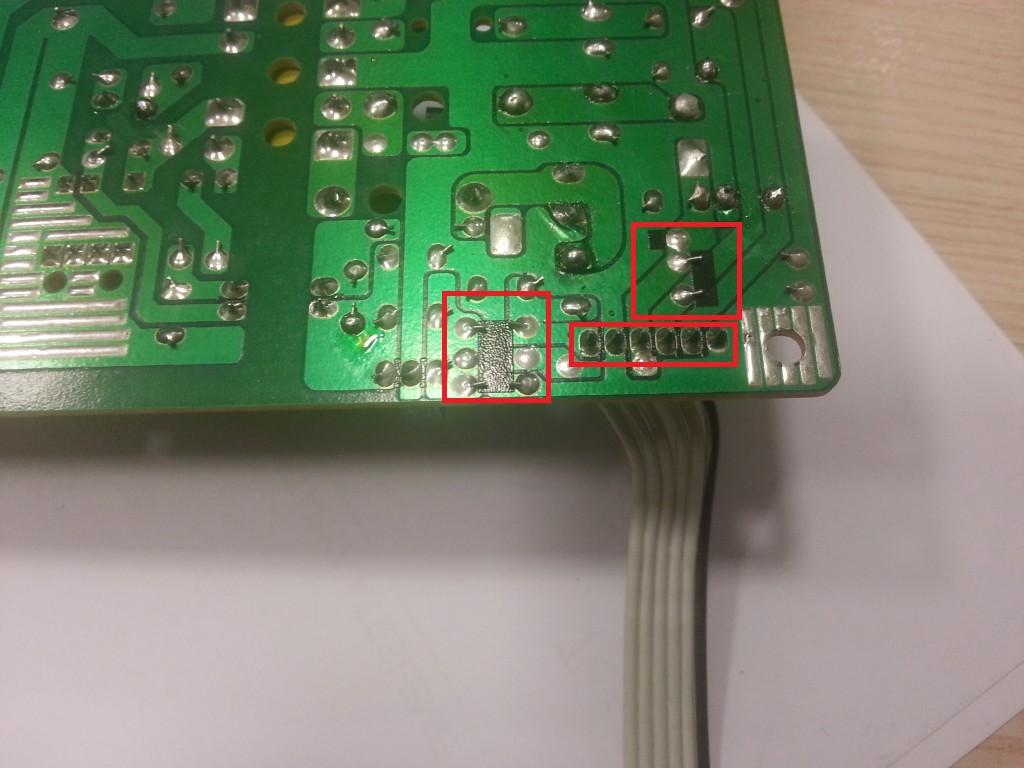 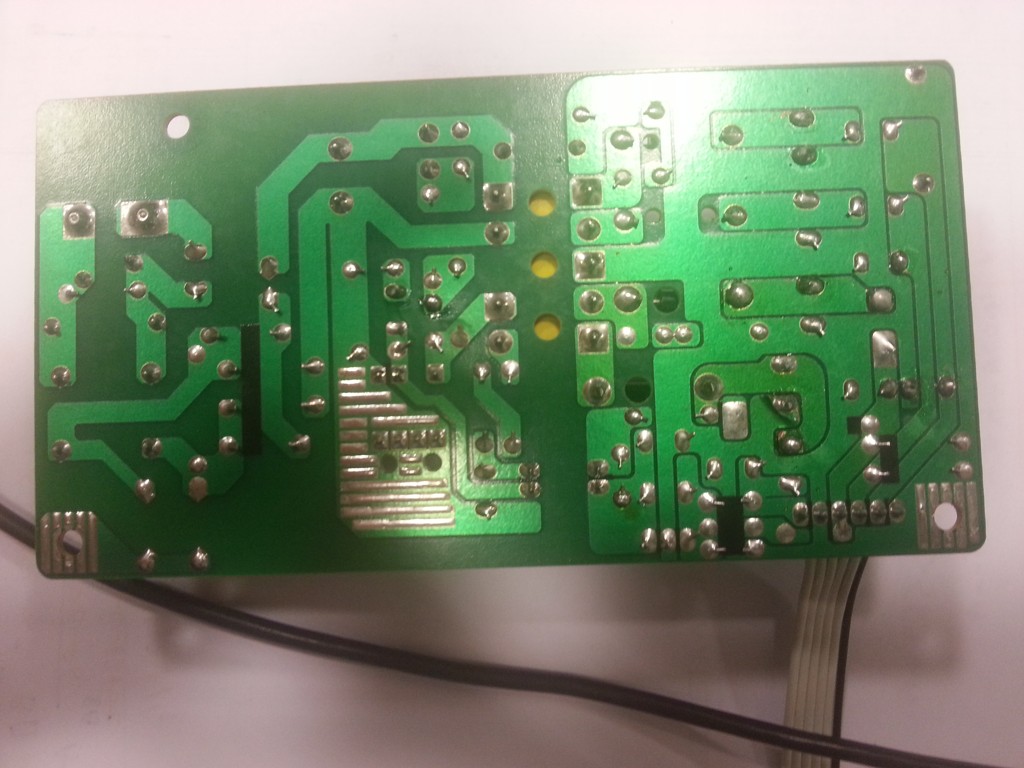 This is photo of the other side. Sorry about quality. At that moment, I can't take a new one. Bottom-left corner of the following photo corresponds to bottom-right corner of photos above. 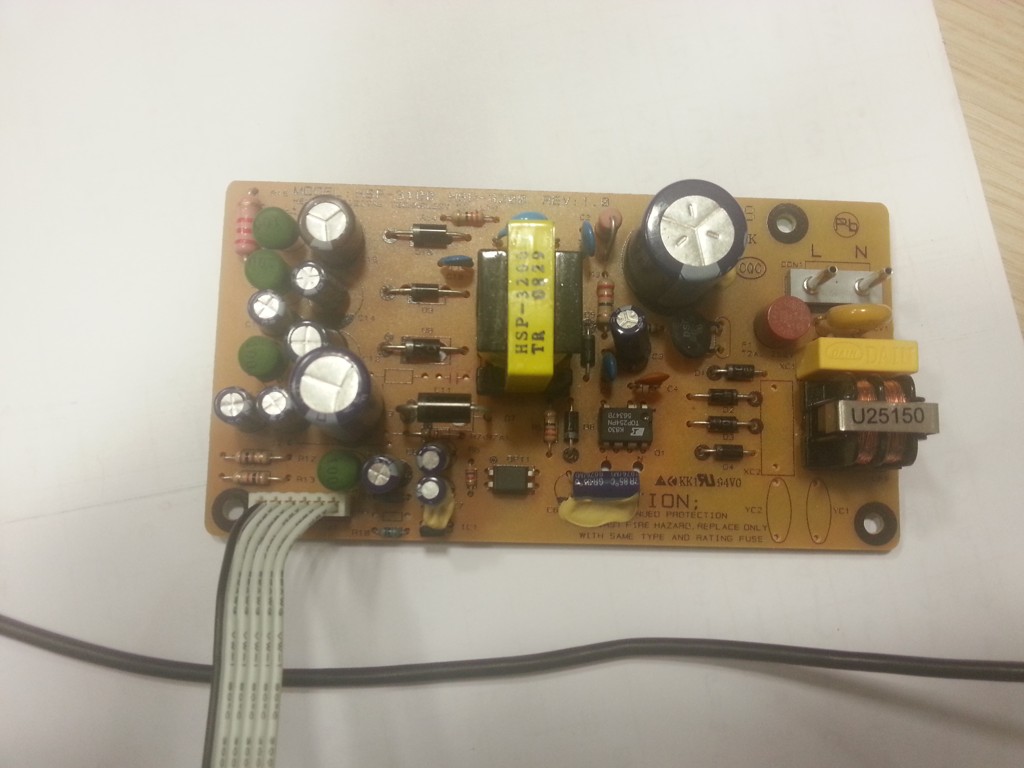 This is pretty hilarious. It's drafting tape with soldermask applied over it. You can tell from the width, color, and the texture (drafting tape has a pretty unique ripply-rough texture). This stuff: 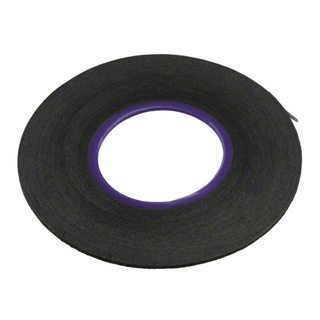 It's pretty much standard to use this stuff for last minute bodges and various other "sticking-things-to-stuff" and "touching-up-the-mask" related activities at a PCB fab house. Especially on these phenolic paper single sided boards that are used throughout ultra-commoditized products like power supplies. They're pretty close to the platonic ideal of a 'crappy PCB.' Quality you can stomach at prices you'll lower your standards for!

I've taken apart many an old power brick or ATX power supply in my day (don't ask - I was a teenage male and wanted those 400V caps for...stuff) and occasionally you'll find weird things like this. Obvious mask touching up in the form of blocky copper artifacts in spots (like someone just taped over part before the photo resist was exposed), component and footprint mismatches, silkscreen that is simply wrong, and sometimes surprise 'leftovers' entombed under solder mask. Also, sometimes if you desolder some components, you'll catch a waft of foreign food smell. Seriously. I try not to think too hard about what is even going on with that one.

Who knows what happened, but there was something taped to it, or being touched up or fixed, or both and it may or may not have been intentionally left there. It looks like it was deliberately placed between the pin header pads, its usual use case involves small cuts and an exacto-knife. I suspect someone just forgot to remove it before the solder mask got applied and there it has stayed. The parts of the tape that were not covered (pin header connector pads) would have been scrubbed off during the cleaning and pre-HASL phase of the board manufacture, except for the bits safely shielded by the solder mask.

If there are these same strips on others of this board, then it was probably something that had to be touched up and some poor soul probably tapped strips of drafters tape on thousands of those boards. Maybe there was a problem batch, or even board, and it's not common to this whole run. Who knows. Either way, it doesn't really matter. There is no deeper engineering reason behind it, hence the inconsistent use of the tape. It is not involved in the circuit itself, but rather an artifact of the board's manufacture.

If you like, you can scrape off some solder mask and peel off a strip. It won't hurt anything if you pick some that is not covering copper, and you can empirically confirm this answer. And I'll update this answer and leave in shame if it turns out not to be good ol' drafting tape, but I am very certain that's exactly what is.

With these you just have to experiment, I'd suggest putting the board fairly close to the lamp (20-50mm or so).

I suggest you take one longish strip of photoresist PCB and put something on top of it that blocks UV light, then expose the strip while moving the UV blocker away at predefined intervals (say, every 10 seconds). What you will end up with is a PCB exposed in steps for different exposure times (10s, 20s, 30s, 40s, 50s etc.), then just pick the exposure time that gives off the best result.

I have been using a 3% solution of NaOH (KOH works too) which seems to work well.

You just basically move it around in the solution until it seems developed (black stuff comes off the board), usually it develops quite quickly (under 30s) but this depends on your solution. If your solution is too strong or you develop it too long it will strip off all the photoresist if you keep it in the solution too long. A solution not concentrated enough won't successfully develop the board (again, 3% solution seems to work well). Washing the board under a faucet afterwards works well. You can continue developing after taking it away from the solution. You can actually even continue developing after etching the board a bit, just remember to wash the board. Putting the board in the etching solution shows you pretty well where the board has photoresist and where it doesn't, the copper exposed to the etching solution goes to this "dull" color/texture in under a minute in the etching solution.

A board with the plastic shield SHOULDNT be affected by daylight but to be sure I'd keep them in a place shielded from light (like a drawer).

Btw. I'd suggest you try to expose your boards with a 11W fluorescent table lamp (the ones with a "U"-shaped lamp, they should be pretty common and cost like 10e from Ikea). Put the lamp quite close to the board (like 50mm close, and have a thin plate of glass over the board to keep the mask close to the board). You can get suitable plate of glass from picture frames (again, Ikea is a good place to get these), just make sure its real glass and not plastic. Expose for 12-15min (I've used 13,5min for my boards and setup). I have been using this method succesfully for a long time. Won't work for large boards due to the lamp being so narrow but for small boards it works well.

Whether it's your fault or not depends on what you told the manufacturer the file names represent- the names in your title are standard for Altium, but other EDA software uses different names. Even so, I would expect the people at most suppliers to flag it and ask questions, but some folks are doing some pretty weird PCBs these days and the automated front end software requires you to spoon feed correct files to it.

Suggest you check your readme file (or if it was a file-by-file upload to a web site try to find if you uploaded the same file in two places).

Can you post a photo of the PCB? It sounds amusing-- did they at least subtract the mask from the pads? Otherwise it's pretty much useless.

Edit: Now that I see your photos-- the yellow solder mask I've gotten looks about exactly like that- it's almost transparent.