We are having trouble with a CISPR-11 (EN55011) Radiated Emissions Class B compliance test in one of our solutions. The troubling part of it is basically an industrial motherboard (with a commercial SSD and commercial RAM) within a well grounded metal enclousure, sharing space with an industrial switch, a switching 12V industrial power supply and a industrial touch panel and monitor. Every single one of these industrial components have its corresponding compliance certificate for CISPR-11. The antenna picks up the following waveform (Vertical orientation, 3mts distance, 30 to 200 MHz bandwidth). Crosses above the threshold are non-compliant peaks. 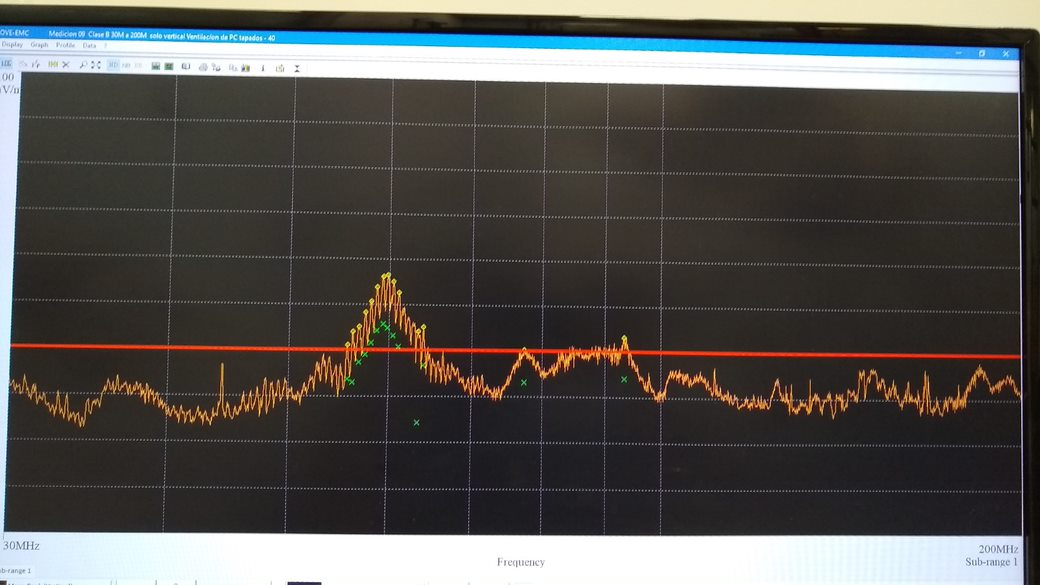 The main offender is a 60MHz peak that looks like a strong square wave in frequency domain. That is new to me in these tests; I am more used to specific harmonics in the spectrum.
If we turn off the motherboard (and thus also the RAM and SSD), the 60MHz and also those crests at ~80MHz dissapear. Turning of the rest of the components (except the 12V PSU) has no effect.

I have the motherboard's compliance test and procedures, and their peaks are nowhere near in power or frequency. They also used commercial RAM and a mechanical commercial hard drive.

Has anyone seen this waveform before for radiated emissions and/or has any idea, given the description of our system, what could be generating it?

EDIT: Based on comments and answers, I will clarify some things. First, I have 1 Ethernet cable (unshielded) inside the case, connected to the switch, also inside, but then 3 Ethernet SSTP cables going out from the switch to 3 ethernet Basler cameras. These 3 do have a ferrite clamp on each, but I haven't fiddled with the one inside. I'll note that down.

The SMPS was our main target for the whole ordeal but I still need to try ferrite beads on its outputs and maybe enhance the shielding around it.

Unfortunately we do not have our own spectrum analyser and our scopes are up to 60MHz. We do not develop high frequency custom electronics, so they were not neccesary. Given the circumstances, we may adquire one and do our own pre-compliance testings, as many of you suggested.

I will keep this updated.

It looks like roughly 5MHz impulses with a resonance at 60MHz to me judging by the sidebands (20 per 10 MHz) but could be a 60MHz clock with roughly 5MHz recursive sidebands.

The fastest way to find the offending signal is to use a small loop antenna probe to DSO or scope (Coil or wire in a small loop) to sniff out the near-field noise. If you have 2 sized loops you can get a quick look then a smaller loop to get near the chip, trace etc. 60 MHz is about the size of a small room resonant frequency.

If indeed it is the data on the external cable then a Balun on the cable is a valid fix for that until you put a CM choke or SMT PHY on the data stream on the MOBO.

This is also the best practice for pre-test scanning the signature emissions before paying for the unintended radiation tests at 3m at an outside lab. I would use a current loop probe for near-field inside the box and an E-field probe or just a wire on a coax end into the Spectrum analyzer for a broadband spectrum. Antenna efficiency drops for longer than 1/4 wavelengths but it is still broad spectrum.

Answer 1: If you don't know anything about the impedances I would always use series termination in the range between 50 and 100 ohms. Which value you choose is not that critical, but as a rule of thumb: When the communication still works with a higher value, choose that. EMI is caused by reflection due to impedance mismatching. The intended Signal will have to flow through the series terminator only once, whereas a reflection will have to do this at least twice causing it to shrink. So series termination is no reflection prevention but an effective and easy way of reducing it.

Don't try to attach an oscilloscope to evaluate signal integrity, since this will significantly influence the signals.

Answer 2: The frequencies you mentioned can be suppressed using ferrite beads. If space is no constraint, try the one you can wrap around FCC cables.

Power lines should be buffered with capacitors on both boards, make sure to use caps that are fast enough. It is common practice to parallel multiple caps (say 3x100nF) to reduce ESR.

If you still have problems with the clock you can try to add a low-pass at about the clock frequency before feeding it to the cable and restore/buffer the clock at the sink board if necessary.

One of the confirmed methods in reducing the radiated EMI is using spread spectrum clock instead of the fix one (that in this case is 500KHz). If you simply could add some jitter to the clock (e.g. 500KHz +/- 20KHz) the concentration of the radiated energy will distributed over a wider range and the overall radiated energy of the switching device will be reduced. There is an IEEE article that may could be helpfull https://ieeexplore.ieee.org/document/1031552 Spread spectrum clock generation is very effective in reducing conductive radiation in micro controller based circuits too and some Freescale uCs have built-in SSCG engine.

There are some other ways. If your PCB had enough space, you could implement twisted pair on the PCB for line input and the same for line output.(some us patent exists for implementing twisted pair on PCBs) You may have a big inductor on your circuit some are shielded and some are not. In your case using shielded inductor is much better. If you had any control on reducing the rise time of the 500KHz signal, It could be also effective on the radiation.