I'm looking for any resource that can help me build a very very basic RC circuit. I'm talking as simple as using RF to turn on/off an LED. The purpose of this circuit is for research and education. If anyone knows where I can get parts for simple RF circuits or even a tutorial or schematic that would be really appreciated.

From what I've gathered, (and I'm an absolute noob to this) I will need a transmitter and a receiver… is that correct?

Honestly guys, I know you are all probably annoyed with this question and trust me, I wouldn't bother you all if I could find my own way into RF for beginners but really I'm having the toughest time finding good resources for RF circuit building. All I'm looking for is something to get me started in the right direction and then I can go from there.

I've googled about a thousand things to try and find info on this but all I end up getting are a bunch of RC planes/boats sites. Nothing for just regular basic do-it-yourself circuit building.

Please no infrared. I'm only interested in radio control. Thanks!

If you want complete DIY, which is probably not you best starting point, then something like this is about as simple as you can get. Receiver at left. Transmitter at right.

That is from this wonderful page of RF ideas Homebrew RF Circuit Design Ideas These tend to be circuits only with no notes so a bit of a leap for a beginner.

with the actual circuit diagram here

A wireless doorbell may do what you want.

"ASK" RF data modules abound - finding them amongst the 1000 at a time Alibaba adverisers is the trick.

Here is one at $US6 with free shipping Uses nRF24L01 transceiver IC from Nordic. 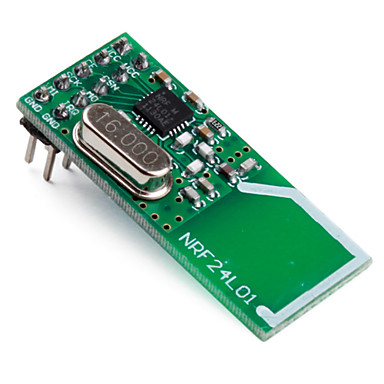 You can DIY it with the IC, burt here's what's on board (+ a power supply) 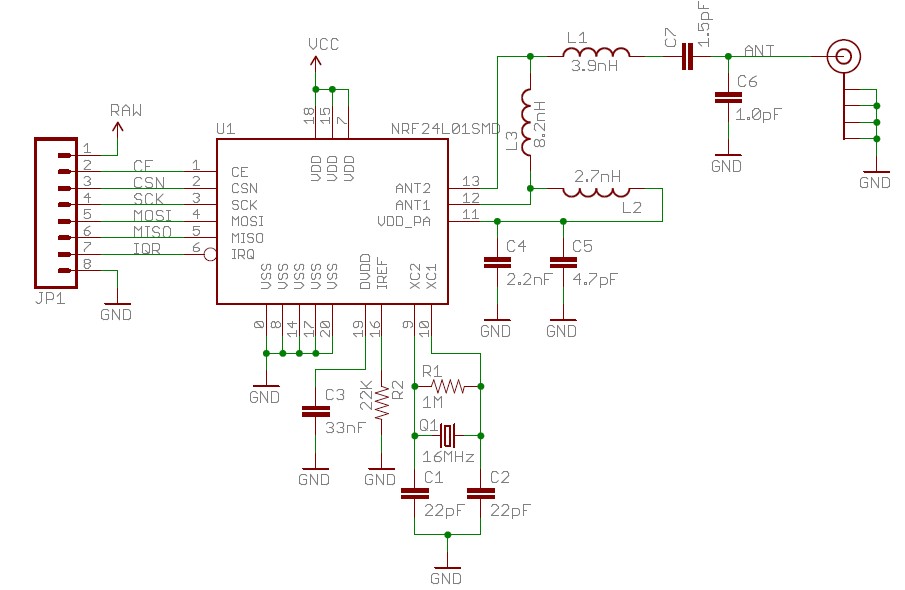 A bit fancy but would do what you want - but also somewhat complex to use and at GBP13.50 a bit expensive Pololu Wixel 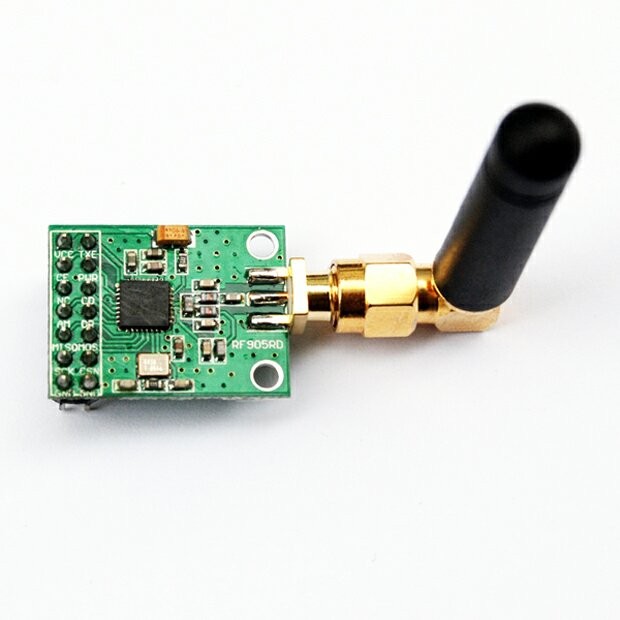 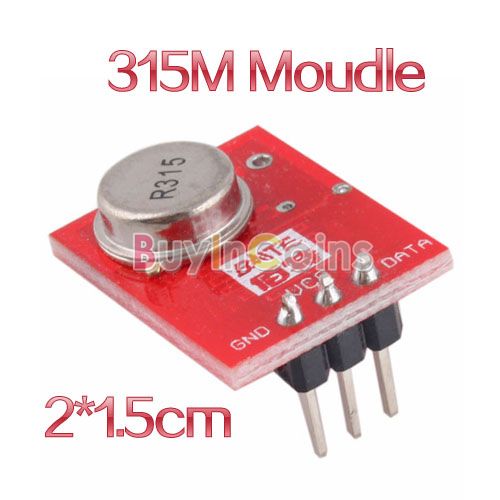 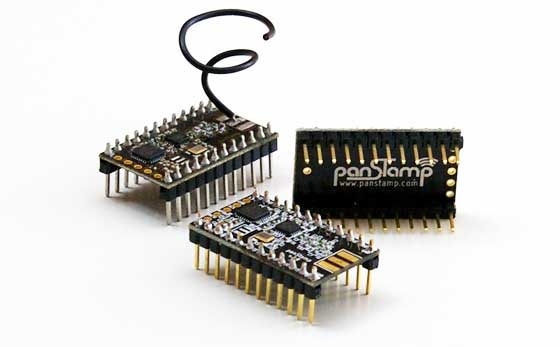 Units like this rare widely available at modest cost. This site only sells them in volume (probably). 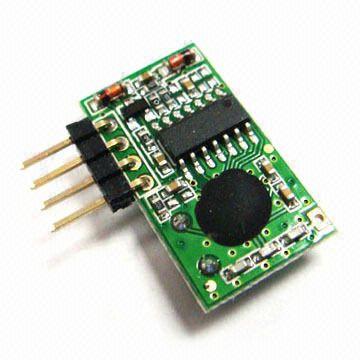 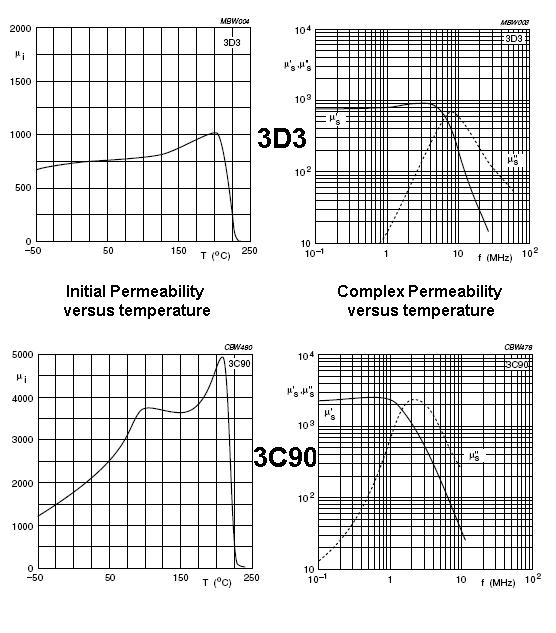 Electronic – Help with or hints for decoding an IR protocol

I'm taking the liberty of answering my own question as I got most of it figured out and this is a good way to share my findings. My thanks to Olin Lathrop for giving me a place to start and some ideas to try out, but ultimately, the protocol turned out quite different from Olin's guess, hence me posting this answer.

Update: I posted a follow-up question regarding the last 8 bits, which I didn't fully understand, and Dave Tweed figured it out. I'll include the details here, so this answer can work as full protocol spec, but do go check out Dave's answer.

I had to try some different things to get this figured out, but I'm pretty confident that I got it. Oddly, I haven't found anything resembling this protocol elsewhere, but it may very well be a common protocol that I just don't know about.

The pulse/space timings are in the original question, but I'll repeat them here for completeness:

All ±10µs max., ±5µs typ.. This is based on samples captured with a logic analyzer at 16MHz; I don't have an oscilloscope, so I don't know the exact profile (i.e. rise/fall times).

Packets are repeated as long as the control inputs are applied and appear to be spaced a minimum of 100ms apart.

Packet transmission starts with a "pulse 1" preamble, which is fixed and not part of the data. The following space encodes the first data bit of packet, and the last pulse encodes the last bit.

Each packet is 32 bits long, and contains every input the remote control can provide. Values are read as little endian, i.e. MSB first.

Below is the basic structure of the individual packets. The last 8 bits had me confused, but that's been figured out now (see below).

Note: Ranges are based on the highest readings I got. The protocol is capable of larger ranges - up to 255 for throttle, 63 for pitch/yaw - but cap out at about half that.
The pitch value appears to have a deadband from 14-21 (inclusive); only values of above or below actually makes the helicopter react. I don't know if it's the same for the yaw (hard to tell, as the helicopter is unstable anyway, and may just spin slightly on its own).

The 6 check bits are calculated by XOR'ing all the preceding values. Each value is treated as 6 bits. This means that the 2 MSBs of the 8-bit throttle value are simply ignored. I.e.

The signal timings and modulation doesn't need to be super accurate. Even my Arduino's not-at-all-accurate timing works fine despite dodgy modulation and a bit of hit and miss on the pulse/space durations compared to the real remote control.

I believe - but haven't tested - that the helicopter will simply latch on to the channel of the first signal it finds. If it's left without a signal for too long (couple of seconds), it appears to go back to its "search" mode, until it acquires a signal again.

The helicopter will ignore pitch and yaw values if the throttle is zero.

The trim commands are sent only once per button-press on the remote control. Presumably the trim value simply increments/decrements a value in the helicopter's own controller; it's not something the remote control keeps track of. So any implementation of this should probably stick to that scheme, and only send the occasional trim left/right value, but otherwise default to a zero trim value in the packets.

I recommend having a kill switch that simply sets throttle to zero. This will cause the helicopter to drop out of the sky, but it will sustain less damage when it's not spinning its motors. So if you're about to crash or hit something, hit the kill switch to avoid stripping the gears or breaking the blades.

The original remote control's IR LEDs appear to have a >900nm wavelength, but I've got no problems using a ~850nm LED.

The helicopter's IR receiver is ok, but not super sensitive, so the brighter your IR source, the better. The remote control uses 3 LEDs in series, sitting on the 9V rail instead of the 5V rail used by the logic. Haven't checked their current draw very precisely, but I'd wager it's 50mA.

Here are a bunch of packets, for anyone interested (yes, I scripted a decoder; I didn't hand-decode all this). The channel A packets come from the same captures as the graphs in the original question.

As mentioned above, the last 8 bits have been figured out, but just for posterity, here are my original thoughts. Feel free to ignore it completely, as I was pretty much wrong in my guesses.

The last 8 bits of the packet are still a bit of mystery.

The 4 bits from bit 23 to 26 all appear to be entirely determined by the remote control's channel setting. Changing the channel on the remote control doesn't alter the protocol or modulation in any way; it only changes those 4 bits.

But 4 bits is double what's actually needed to encode the channel setting; there are only three channels, so 2 bits is plenty. Hence, in the structure description above, I've only labelled the first 2 bits as "Channel", and left the other two labelled as "X", but this is a guess.

Below is a sample of the relevant bits for each channel setting.

Basically, there are 2 bits more than there needs to be to transmit the channel setting. Maybe the protocol has 4 bits set aside to allow for more channels later, or so the protocol can be used in entirely different toys, but I simply don't know. For the larger values, the protocol does use extra bits that could be left out (yaw/throttle/pitch could get by with a bit less each), but for trim - which also has 3 states - only 2 bits are used. So one could suspect that the channel is also just 2 bits, but that leaves the next 2 unaccounted for.

The other possibility is that the packet's checksum is 8 bits long, beginning with the "X bits", and - through the checksumming magic - they just happen to somehow always reflect the channel setting. But again: I don't know.

And speaking of: I have no idea how those check bits are formed. I mean, they are check bits, since they don't correspond to any single control input, and the helicopter doesn't seem to respond if I fiddle with them. I'm guessing it's a CRC of some kind, but I haven't been able to figure it out. The check is 6-8 bits long, depending on how you interpret the "X bits", so there are a lot of ways that could be put together.