I found on one schematic that has resistor with value 56E.

I don't know what does that mean.

Can you give me some information, please.

I know it's old topic, but I just saw it since I had the same question. Anyway, here's the background story behind "E" letter.

The usage of the Latin letter E instead of R is not standardized in IEC 60062, but nevertheless sometimes seen in practice. It stems from the fact, that R is used in symbolic names for resistors as well, and it is also used in a similar fashion but with incompatible meaning in other part marking codes. It may therefore cause confusion in some contexts. Visually, the letter E loosely resembles a small Greek letter omega (ω) turned sideways. Historically (f.e. in pre-WWII documents), before ohms were denoted using the uppercase Greek omega (Ω), a small omega (ω) was sometimes used for this purpose as well, as in 56ω for 56 Ω. However, the letter E is conflictive with the similar looking but incompatible E notation in engineering, and it may therefore cause considerable confusion as well.

In the image below a amplitude modulated sine wave: 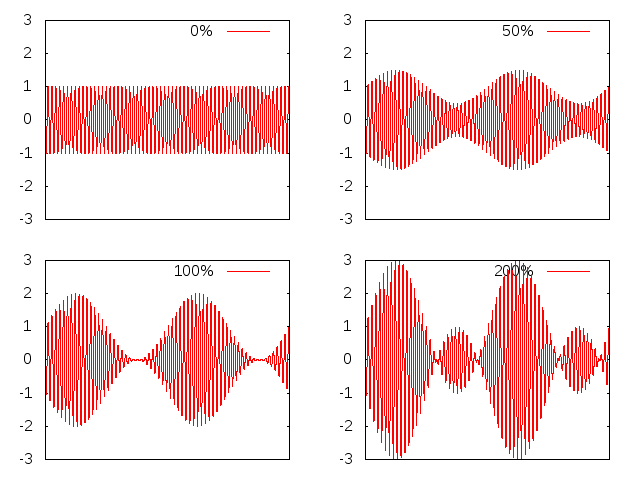 The animation was created using gnuplot using the following script:

As per the application notes of BTA08-600CW, to control a three phase induction motor, for triggering the triac gate, the value of resistor is shown as 510 ohm. How is this value arrived at? 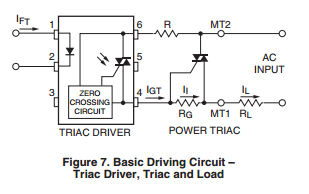 Resistor R (shown in Figure 7) is not mandatory when RL is a resistive load since the current is limited by the gate trigger current (IGT) of the power triac. However, resistor R (in combination with R-C snubber networks that are described in the section "Inductive and Resistive Loads") prevents possible destruction of the triac drive in applications where the load is highly inductive.

Unintentional phase control of the main triac may happen if the current limiting resistor R is too high in value. The function of this resistor is to limit the current through the triac driver in case the main triac is forced into the non-conductive state close to the peak of the line voltage and the energy stored in a "snubber" capacitor is discharged into the triac driver. A calculation for the current limiting resistor R is shown below for a typical 220 volt application: Assume the line voltage is 220 volts RMS. Also assume the maximum peak repetitive drive current (normally for a 10 micro second maximum time interval is 1 ampere. Then

The gate resistor RG (also shown in Figure 7) is only necessary when the internal gate impedance of the triac or SCR is very high which is the case with sensitive gate thyristors. These devices display very poor noise immunity and thermal stability without RG. The value of the gate resistor in this case should be between 100 and 500. The circuit designer should be aware that use of a gate resistor increases the required trigger current (IGT) since RG drains off part of IGT. Use of a gate resistor combined with the current limiting resistor R can result in an unintended delay or phase shift between the zero-cross point and the time the power triac triggers.

What would be the resistor wattage?

I'm not going to work this out for you but it only carries current for the very short time between turning on of the opto triac until the big triac switches on.

From the data sheet, which quadrant to be considered to know the gate trigger current?

I and III. Since the trigger voltage is derived from the supply voltage they always match.

Also for three phase supply, how is the voltage shown as 220 V instead of 440 V (in the schematic diagram)?

No. This system is using zero-cross opto-isolated trigger devices. You feed about 5 to 20 mA into the opto LED and it will only light when forward biased. See the datasheet (which I didn't check). The LED has to be on at zero-cross so if you tried to trigger from AC it would be off (unless the trigger AC was from another phase).

For further reading, see my answer to Using AC current to trigger Triac where I explain the operation of the zero-cross circuit.