On first page of Fairchild BC516 transistor datasheet it's written:

What does it mean? Is it important for part's users or it's some kind of production process description?

I have a "National Semiconductor Discrete Databook" from 1978, listing the semiconductor process used to make each of their transistors (including JFETs) at the time (e.g. BC547, which was Process 04 and package 77).

Then there follows several pages for each process, showing the mask pattern for each process as well as all its electrical characteristics, including bandwidth and noise at different collector currents.

That way, all the transistors using Process 04 can be described in the same few pages of data, rather than repeating the same information for every transistor.

Fairchild may publish a similar "Discrete Databook" with the same information.

My NS databook doesn't feature a Process 61. (60,62,63 yes) I don't know if there's a correspondence between Process numbers across different manufacturers but there might be, so that they were genuinely compatible second sources for each other.

If you can find the equivalent BC547 datasheet you might check if it's process 04 or not, that might give us a clue about that.(EDIT : it doesn't name the process)

In the NS book, process numbers seem to be grouped by device type as follows:

And a separate range labelled 2C up to 5K for power transistors. Even numbers NPN, odd numbers PNP.

I wonder if there was some gentleman's agreement or de-facto standard or register of process numbers?

Also a NS MPS8550 datasheet has the same comment "sourced from process 60" (which has apparently been uprated from 500mA collector current to 800mA since 1978!) but I can only see Nat Semi transistors when searching for Process 60.

The same search on Process 61 brings up only Fairchild devices as far as I can see.

EDIT : (last one, I promise!) First evidence of process number sharing between Fairchild and Nat Semi.

Process 58 according to NatSemi (above) is a N-channel JFET (and an impressively low noise one, under 2nV/rtHz at 10mA drain current, if anyone needs a source follower for a capacitor microphone! It's designed for switching, but the desire for relatively low on resistance gives it the large area required for low noise) Sold as the 2N5432 or J108,J109,J110.

Fairchild sell the same part under the same names (J108 to J110) and the datasheet says "Sourced from Process 58".

Electronic – What does BSC SQ mean

BSC means "Basic Spacing Between Centers". This is often used if the reference lines don't refer to a physical point or edge, like in the case of the pins: the reference is in the middle of the pin, instead of one of the edges.

The abbreviation BSC is misused in the case of the package outline, and overall dimensions, as they are specified by physical edges which can be measured.

Usually a mechanical drawing of a package will show minimum and maximum values. BSC SQ must be regarded as nominal, so may deviate, but it doesn't say by how much.

Electronic – What does “Collector Power Dissipation” mean on a transistor datasheet

You have to obey all the limits. The maximum power is a lot less than maximum voltage * maximum amperage.

Remember, dissipating power is what makes the transistor hot.

For bipolars, the absolute max values are not as useful as the safe-operating-area plot: 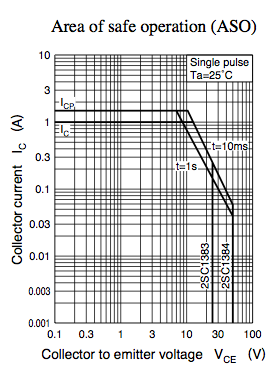