I am trying to reverse engineer a serial communication between to microcontrollers (1 device & 1 microcontroller on a board). One MCU validates the other MCU and I want to crack the validation and mimic the validated MCU. I want to find out what protocol is being used to make sense of the data. I have captured the communication with a logic analyzer and here is a screenshot from PulseView:

PulseView has decoding function but I don't know where to begin. The communication happens via 1 wire only. But I am not sure if the protocol is "one-wire". Are there any known standard methods to identify an unknown communication protocol? Or do I have to identify it by simply looking at it?

I wrote a script to convert the data into time required to change from one state to another (high-to-low or low-to-high) to compare repeated measurements and absence of the validated MCU. Each time the patterns look slightly different. It would have been great to know to decode this into byte array or whatever is intended for.

The first long low period of every cycle is sometimes 90μs sometimes 30μs. Every cycle has 14 switches in total. Long high periods between cycles may differ in length (~270-330μs).

Edit: Here are examples of signals, which doesn't obey the general rule. 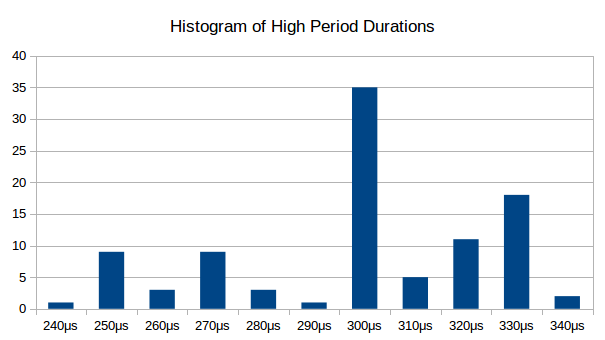 Given the number of toggles, I suspect that this is some kind of unusual line coding. I think we'd need to see more close-ups of each frame (what you're calling a "cycle") to make a guess. In the meantime, here are some tips for figuring out the coding.

Common line codings such as NRZ and Manchester represent bits as level transitions, not levels themselves. In some codings (like Manchester), the direction of the transition is significant:

In others (like NRZ), the presence or absence of a transition is significant.

Sometimes there are two transitions per bit time, sometimes only one. The line code article on Wikipedia has a lot more information with examples of several codings. Implementations of asynchronous protocols often use bit stuffing (e.g. CAN and USB), but that doesn't seem to be present here. Bit stuffing is typically done after a run of ~6 bits, but I don't see any runs longer than 3-4 bits in your data.

The fact that you always see 14 transitions per frame seems significant, but I'm not sure how to interpret it. It looks like there are 15 bit times per frame, so if one is a start bit you'd have 14 data bit times. In a Manchester-style encoding, that would be 7 bits, which could contain an ASCII character.

One common scheme is to represent data with packets. Then the packet format is like:

There are a lot of variations on it. The sync byte lets the receiver synchronize if it gets a partial message. The sync byte can be escaped if it appears elsewhere in the packet, or not. Checksum can be a sum of all bytes, or XOR, or CRC16, etc.

An alternative is to only use ASCII for the serial communications. Then you can synchronize on the '\n' at the end of the message. This is a nice format for debugging, because you can use your favorite terminal emulator.

Many 8x51-family chips have rather crude baud-rate control logic; many 8x51 derivatives (and indeed even the 8052) improved upon it, but even some sophisticated 8x51 derivatives are for some reason severely limited as to the baud rates they can generate. With the original 8x51, it was common to use a crystal of 11.0592Mhz to allow many standard baud rates to be generated precisely, but such usage is less common today.

Check your part's data sheet to make certain that you have your baud rate set correctly and that the actual baud rate you will be producing is within a couple percent of the one for which you have the PC configured. If you have a scope, I would suggest measuring the baud rate. If you do not have a scope, I would suggest that you write a program to repeatedly transmit at maximum speed a sequence of many FF bytes followed by many 00 bytes. If your baud rate is supposed to be 9600 baud and you repeatedly send 240 bytes of FF and 240 bytes of 00, an LED on the port should blink between mostly on and mostly off at a rate of 2.00Hz. If the bright and dim intervals are e.g. a half second each (meaning an overall blink rate of 1Hz) that would suggest that even if you want to send 9600 baud, you're actually sending at 4800).