What prevents lead attached to a piece of semiconductor (for example in BJTs and FETs) from forming a Shottky junction?

There is usually an intermediary material between the semiconductor and the lead wires that does not form a Schottky barrier.

Electronic – Transistors why does increasing base current increase collector current

Dave is correct... I'll try to clarify some more.

BJTs are designed with light doping in the base and a very narrow base width to maximize the diffusion of the emitter current to the collector. As a result, the base current needed to develop the Vbe for a given rate of emitter current injection is very small compared to the emitter and collector current, and so BJTs have high current gain.

Here's an online reference that goes into some detail: Modern Semiconductor Devices for Integrated Circuits, Ch. 8

Electronic – How does current get into a diode

There is a type of diode called a Schottky diode, which is basically a metal-semiconductor junction, so it raises the question, how do you form a metal contact with any semiconductor device, not just a diode.

The answer lies in why a metal-semi junction exhibits diode behaviour in some circumstances. First we need to look quickly at the difference between metal and n-type and p-type semiconductors. 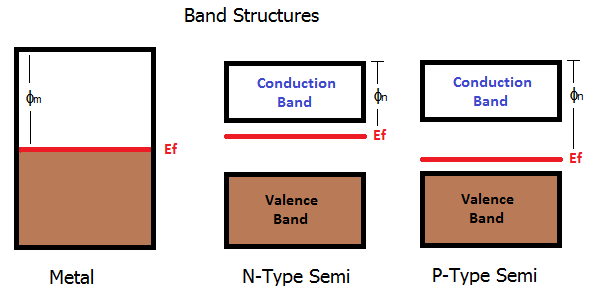 Metals are a continuous band of electron states. Electrons prefer to be in the lower states, so this is show with the shaded brown region. The red line indicates the average energy level (Fermi level) which in the metal is basically how "full" it is with electrons. There is then an escape energy where electrons are no longer bound to the structure - they become free. This is shown as the work function \$\phi_m\$.

When you have a discrete junction between the metal and semiconductor regions, in simplistic terms it causes bending of the band structure. The energy bands in the semiconductor curve to match those of the metal at the junction. The rules are simply that the Fermi energies must match across the structure, and that the escape energy level must match at the junction. Depending on how the bands bend will determine whether and an inbuilt energy barrier forms (a diode). 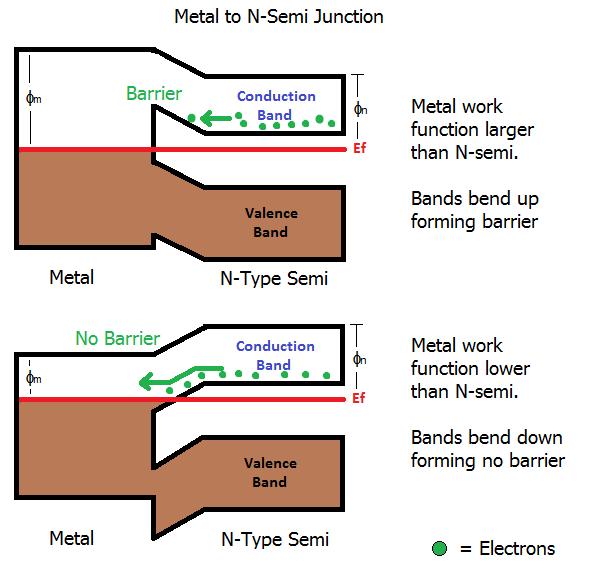 Conversely if the metal has a lower work function than the n-type semiconductor, the bands of the semiconductor bend down to meet it. This results in no barrier because electrons don't need to gain energy to get into the metal. 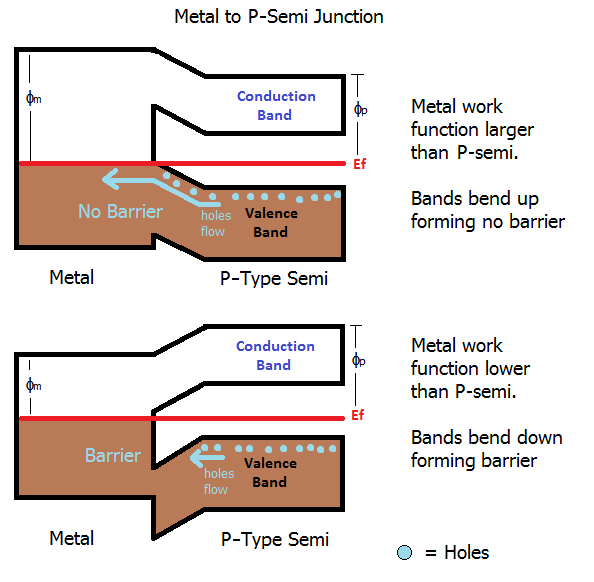 However, this type of contact is rarely used. As you point out in the comments, the optimal current flow is the opposite from what we need in the diode. I chose to include it for completeness, and to look at the difference between the structure of a pure Ohmic contact and a Schottky diode contact. 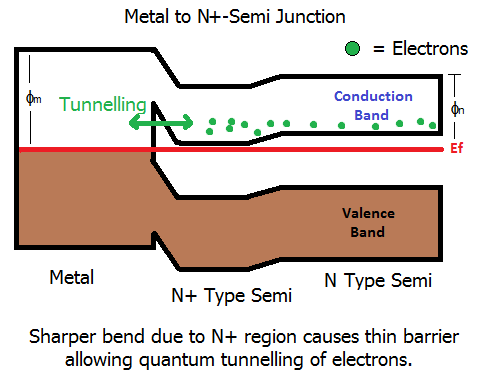 Once electrons are able to tunnel in large numbers, the barrier basically becomes nothing more than a resistive path. Electrons can tunnel both ways through the barrier, i.e., from metal to semi, or from semi to metal.

The barrier is made higher by more heavily doping the semiconductor in the region around the contact which forces the bend in the bands to be larger because the difference in Fermi level between the metal and semiconductor gets larger. This in turn results in a narrowing of the barrier. 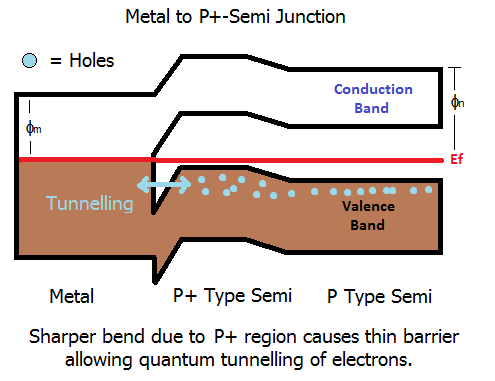 The same can be done with a P-type. The tunnelling occurs through the barrier in the valence band.

Once you have an Ohmic connection with the semiconductor, you can simply deposit a metal bond pad onto the connection point, and then wire bond those to the diodes metal pads (SMD) or legs (through-hole).