I'm not an engineer, but my monitor stopped working yesterday (it just wouldn't display anything but still gets power) so I figured I'd like to take it apart and see what went wrong. At the very least I'd get to see what the inside of a monitor looks like :). Anyway, I took it apart, and also read around about my issue and it seems the capacitors have gone bad, at least some of them. However, I also noticed some white elastic stuff all over the board. Some of them are sticking two capacitors together and to the board, but I also see some from where power socket connects to the board. 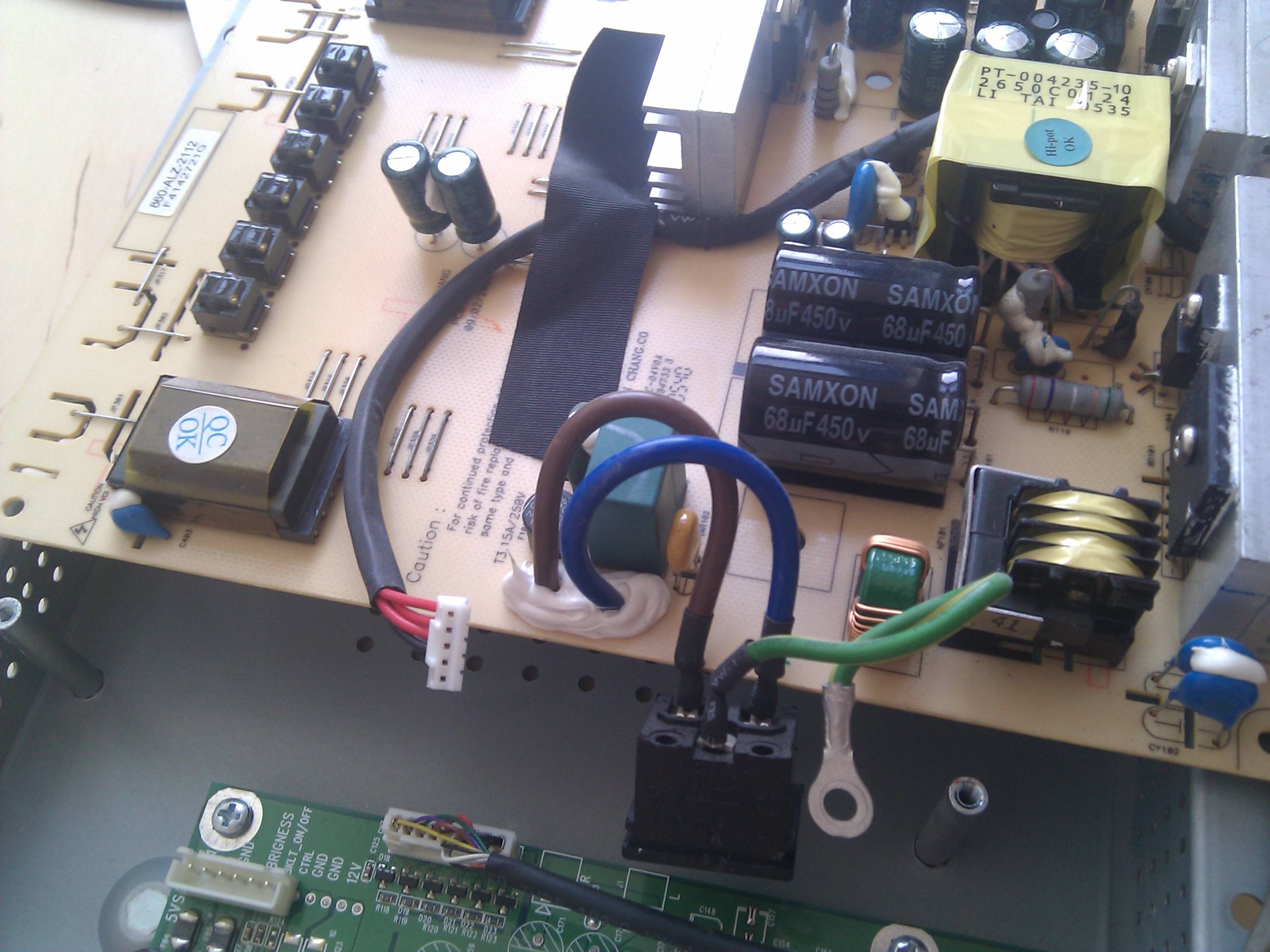 It's very likely to be fastening material for bigger components. Does it look very close to whats on the big capacitor in the middle of this photo, and also at the bottom of this picture, on the blue components. Edit: yes that very clearly looks like fixating material to me. They may have used it as a strain relief in this case for the mains wiring.

This is used to prevent any vibrations getting bad for the solder joints. The big component has a relative large weight and must therefore be fixated down more properly.

If you want to try and fix the monitor you could look for:

Usually I look for forums and other 'fix guides' on the internet to see what they are attempting and see if there is anything I haven't done yet. Usually one or a combination of these three faults are the most likely ones.

Electronic – Is the damage on this circuit board too much to be fixed? (pics inside!)

First off, I'm going to presume that the TV is out of warranty. If it is still covered, your best bet is to call the warranty line and get it fixed that way.

It's hard to tell from your popped resistor photo, but is there a heat sink to the left of it in the image that is black? There might be something under there that blew out too.

As for DIYing the repair, you could try swapping out that through hole resistor that blew. However, while it's common for low quality capacitor to give out, resistors don't usually pop unless there is an over current situation, so there might be a larger issue at hand here. It also looks like there are 0 ohm and a 47K (? hard to read) ohm surface mount resistors in the damaged area on the back of the PCB that might need replacing.

If it's currently broken, there's no harm in attempting a repair. Find a friend who does electronics to help you source the parts, especially if you think you'll need to replace those surface mount resistors.

As for getting a replacement board, rather than having it replicated from scratch, you should be able to get a replacement board. The various boards in TVs are usually modular (power, tuner, etc), and that appears to be the power supply board. Try searching for "TVMAKE TVMODEL Replacement Power Supply Board" and see what comes up. I know the Vizio 50" plasmas have a nasty habit of blowing power supplies and thus they're pretty easy to find replacements for online.

Good luck and stay away from your boyfriend's books lest they burst into flames. ;)

Yes, they should probably be okay.
However, since they are probably under a fair bit of stress (heat mainly) being part of a graphics card, ideally you would replace them with some high reliability/temperature rated versions.
Purchasing parts that have a datasheet from a "reputable" electronics supplier (Mouser, Digikey, Farnell, RS, Newark, etc) mean you can make a selection based on the ratings, and make it less likely that you will get some cheap and nasty caps.

To show the difference between typical aluminium electrolytic types (almost certainly the caps used on your card) here are a couple of datasheets from the same (reputable) manufacturer:

The parts you show should work at least for a while, but if you have the inclination, I would have a look and see if you can find some better parts that fit your board. The footprints for these parts are pretty standard, so it shouldn't be hard to come up with plenty of options. If you need any help deciding then just update your question.