Referring to the following schematic: 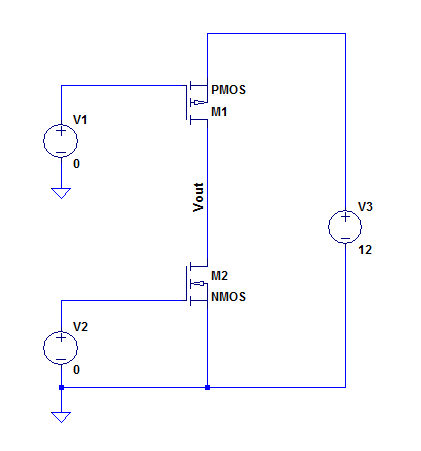 My current understanding dictates that a transistor will output a certain drain current given an input voltage at the gate (V1 and V2). How can this behavior stand true in the schematic shown, since there will be two "competing" current sources? Which transistor sets the current of the circuit?

Which transistor sets the current of the circuit?

The transistor which tries to make the lowest current.

For a transistor to determine its drain current it must be in saturation mode. For this to happen, Vds > Vgs - Vt so there must be enough Vds and not too much Vgs. If Vgs is too large, the transistor will be in linear mode and behave as a resistor.

Suppose that both NMOS and PMOS have enough Vds to be in saturation, for example when Vout = Vdd/2. Suppose the NMOS wants to make 100 uA flow but the PMOS wants 200 uA to flow. Which one will win?

So the voltage on Vout will go up. What does this mean for the transistors? For the NMOS this is good news, Vds will increase so it can continue to make 100 uA flow. No problem!

For the PMOS things are different, as Vout goes up its Vds will decrease to the point where the PMOS will go out of saturation mode and enter linear mode. The PMOS will have no control over the current. It wants to make 200 uA flow but the NMOS prevents that by taking all the voltage. So the NMOS wins since it wanted the lowest current.

Also if you switch a transistor off by making Vgs = 0 then that transistor will win as there's nothing the other transistor can do to make any current flow.

Realize that it is easy to make less current flow (just drop voltage) but it is impossible to make more current flow than the current a transistor gets from elsewhere.

But as current is voltage/resistance, the dependence will cancel out and you'll get "constant" current.

From Wiki (emphasis mine):

Also, from the MOSFET operation description, under saturation:

Since the drain voltage is higher than the source voltage, the electrons spread out, and conduction is not through a narrow channel but through a broader, two- or three-dimensional current distribution extending away from the interface and deeper in the substrate. The onset of this region is also known as pinch-off to indicate the lack of channel region near the drain. Although the channel does not extend the full length of the device, the electric field between the drain and the channel is very high, and conduction continues.

You would not be able to control both series source-drain voltages simultaneously. Try to draw out this circuit, with the controlling voltage sources in place. You would need to control both FET's to have the same Vgs and Vds. Once you attempt to draw it out you will realize that it cannot happen (falstad circuit simulator is nice for this, you can probe V and I, in real time).

If you attempt to do this (set both transistors Vgs and Vds simultaneously), you will not have a series circuit, since the voltage supplies would be in parallel. In this situation, the power supplies would source/sink whatever currents were needed to make the FET's Vds equal, but equal currents would not flow through each FET.

In series, there will be more voltage drop on whichever FET is weaker. This provides equal current to the FET which is stronger (with lesser Vsd drop). If one (or both) FET must go into the linear region for this to occur, it will.

Two transistors in series with different W/L ratios combine exactly like parallel resistors. This makes sense because the W/L ratios can be considered as a conductance.

So, adding a similarly driven strong FET in series with a weaker FET just makes the chain weaker overall.

Of course there is the body effect (if these are built on-die, which is implied since you can vary the W/L), which increases the threshold voltage of whichever FET's do not have their source at the most negative/positive voltage, for NMOS and PMOS respectively. This can be thought of as reducing the W/L ratio. This occurs if you have two or more of either type in series (2+ NMOS or 2+ PMOS). A CMOS inverter does not suffer the body effect since both NMOS and PMOS have their sources at the respective supplies.