edit: What are important parameters in audio op-amps?

First there's noise. All components have some level of noise and there are several types of noise. While noise levels can be very low our ears are very sensitive to it. Noise is expressed in \$V/\sqrt{Hz}\$. That's a strange unit, but can easily be explained. Noise has a continuous spectrum and is defined as power over a specific bandwidth \$W/Hz\$. To get the voltage (in a specific load) you take the square root of that.
Next there's distortion. Probably the most published parameter is harmonic distortion, and it's the one manufacturers draw the most attention on. The reason is simple: it's relatively easy to obtain spectacular-looking figures like 0.01%. But these figures are rather meaningless, because the weakest link, the speaker, often adds several procent harmonic distortion extra, and our ears aren't that sensitive to it.
Then transient intermodulation distortion (TIM) is far worse. It occurs when a higher frequency component modulates a lower frequency, and because their product creates non-harmonic frequencies this is much more audible. TIM was discovered rather recently because measurements were originally done with single sine waves, and then this kind of distortion can't occur. High slew rate op-amps have low TIM levels. Despite being much more annoying than harmonic distortion TIM levels are hardly published, because it's harder to get the same fancy looking figures as for harmonic distortion.
Bandwidth is also important. Op-amps have a gain-bandwidth product (GBW) which indicates that the bandwidth depends on the amplification; a higher gain (amplification) results in a lower bandwidth. GBW is closely related to slew-rate, and you want to have a much wider bandwidth than the 20Hz-20kHz of audio to get high slew-rate values.

edit
Looks like I have to answer my own question... :-)
I read somewhere that the LME series is National Semiconductor's selection of high performance, high fidelity devices. You find the lot of them on National's site; there's too many to list here.

Electronic – How important is impedance matching in audio applications

Impedance matching is not used in modern audio electronics.

In all these cases, the load impedance is significantly larger than the source; they are not matched. This configuration maximizes fidelity.

Impedance matching was used in the telephone systems that audio systems evolved from, and was (sometimes?) used in vacuum tube amplifiers, but even then, it's a trade-off between maximum power and maximum fidelity.

Transmission line effects don't apply. With a wavelength of at least 10 km (for 20 kHz), I think the most effect you'd ever see from reflection is some comb filtering (HF roll-off) with lines a few km long? But that's totally unrealistic.

Audio cables are NOT transmission lines. Marketing hype for exotic cables often invokes classic transmission line theory and implies that nano-second response is somehow important. Real physics reminds us that audio cables do not begin to exhibit transmission-line effects in the engineering sense until they reach about 4,000 feet in physical length.

For audio circuits, is it important to match impedance?

Not any more. In the early part of the 20th century, it was important to match impedance. Bell Laboratories found that to achieve maximum power transfer in long distance telephone circuits, the impedances of different devices should be matched. Impedance matching reduced the number of vacuum tube amplifiers needed, which were expensive, bulky, and heat producing.

In 1948, Bell Laboratories invented the transistor — a cheap, small, efficient amplifier. The transistor utilizes maximum voltage transfer more efficiently than maximum power transfer. For maximum voltage transfer, the destination device (called the "load") should have an impedance of at least ten times that of the sending device (called the "source"). This is known as BRIDGING. Bridging is the most common circuit configuration when connecting audio devices. With modern audio circuits, matching impedances can actually degrade audio performance.

Therefore, unless you're the telephone company with mile-long cables, source and load impedances do not need to be matched ... to 600 ohms or any other impedance. --- Bill Whitlock, president & chief engineer of Jensen Transformers, Inc. and AES Life Fellow.

Don't use the first circuit. Any noise or spikes on the power supply will be mixed with your signal. Because the bias point is connected directly to the signal, you can't filter out power supply noise without also filtering out the signal.

Do use the second circuit. It produces a mid-point voltage that is tightly coupled to ground, so the DC component is half the supply, but the AC component (noise and spikes) is filtered out by the capacitor. That's not a complete circuit, though, you still need to connect it to your signal.

This is what you're trying to do: 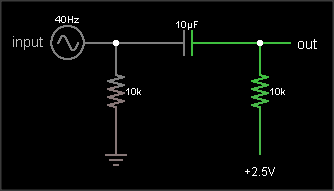 The output is the same as the input, just shifted upward by 2.5 V. The resistor on the input ensures that the input side of the capacitor is already at 0 VDC bias when an external circuit is connected, to prevent "pop" sounds (if the voltage suddenly jumped from 2.5 V to 0 V). The resistor on the output side of the AC coupling cap biases that side to the DC bias voltage. If your circuit already has a clean, low impedance DC bias voltage source, connect to that. Otherwise, you can use circuit #2 to generate the bias, like this: 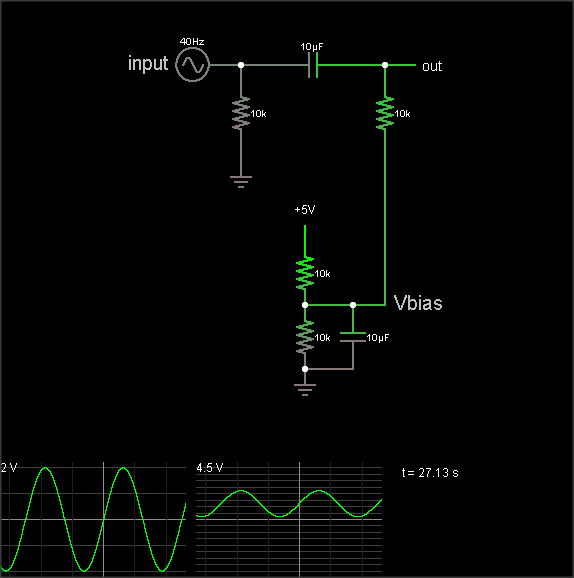 (The simulation takes a loong time to reach the DC bias value, though. Hit the "Find DC operating point" menu entry to settle it.)

The DC bias voltage is produced by a voltage divider and capacitor to filter out power supply noise. Note that if you use the same Vbias point for multiple signals, they can crosstalk through this point. Larger bias cap reduces crosstalk. Larger coupling capacitor improves low frequency response. But make them too large and they'll take a long time to charge when you flip the power switch.

The 3rd diagram is not a biasing circuit; it's a microphone preamplifier.