I hope this question is on-topic for this site.

The city I live in (Chennai, in India) got a rapid transit metro rail a few years ago that uses overhead electrification of 25kV, 50Hz AC voltage to power the trains. I also know several other rapid transits over the world sometimes use a different method of powering trains called a "third rail", where a solid rail close the ground, which carries 700-1000V DC voltage to power the trains.

Doing some research, I read that the overhead voltages can carry high voltages since they are located high above the ground and thus, wont arc to the ground due to the capacitance, and the sheer magnitude of the AC voltage. This seems to be the reason why third rails use such thick rails, to carry high current with such lower voltages to output the same power an overhead rail would.

Now, the rapid transit in my city has some sections elevated and some underground. The elevated sections have a catenary wire like arrangement for the overhead electrification, while the underground portions have a solid metal rod attached to the top of a circular tunnel. A picture of this rapid transit's tunnel at a crossover is here: 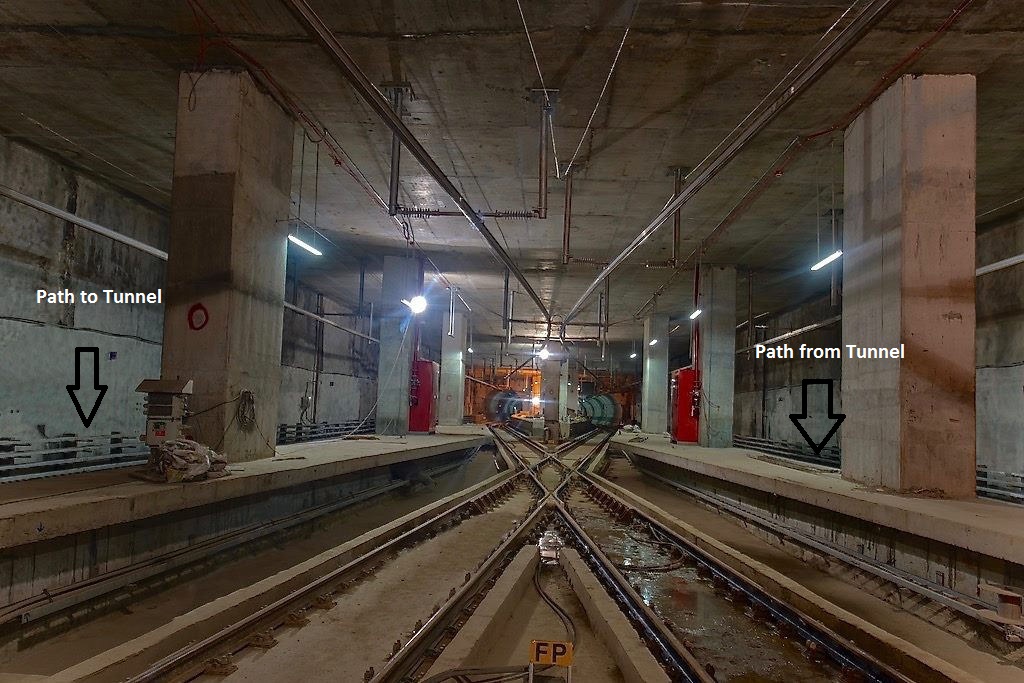 Now, since the tunnel is underground, the earth surrounds the tunnel from all directions, including up. Wouldnt the same problem of the third rail, i.e, arcing to the ground also occur here. What is preventing the 25kV AC from arcing to the ceiling (which is infact the earth, so it's more or less similar to grounding).

Can someone please help me understand what I'm missing here?

Edit: another relevant picture of the tunnel itself for viewer 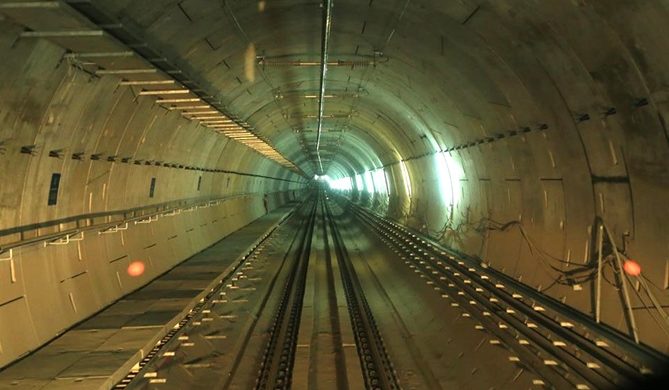 According to answers to this question:

The breakdown voltage of air varies significantly due to changes in humidity, pressure, and temperature. However, a rough guide is that it takes 1 kV per millimeter.

Therefore your 25 kV overhead rods will be adequately spaced from the ceiling at a minimum of 25 mm / 1 inch; it looks like they have several times that.

The main reason for using lower voltages on 3rd rail systems is probably the size of the insulators to support the rail mechanically. Insulators aren't free air clearance; as the answer explains:

The breakdown gradient for creepage is lower than for clearance since dirt can accumulate on surfaces. Some dirt is partially conductive on its own, but many things can provide leakage paths after soaking up some humidity.

Your second photo of the tunnel appears to show the clearance from the ceiling is rather less than the creepage distance along the horizontal insulators. It would be impossible to mount a third rail on insulators of that size.

The safety of line personnel on 3rd rail is a factor for the lower voltage, but not the only one: direct contact with a 3rd rail at less than 1 kV is likely to be fatal to a human.