For typical AC to DC power adapters, I understand that the device draws the current it needs from the adapter. If it pulls more than the adapter can supply, this can cause overheating and lead to breaking the adapter.

Following this… I am always charging my phone or tablet on 1A USB chargers or in normal PC USB ports, yet I have never experienced a broken USB port resulting from this.

I'm mostly thinking in the context of devices which charge via USB.

To be compatible with the original standard, USB devices should not draw more than 100mA (which is plenty to power the logic interface), until they have negotiated with the host, to find out what it can supply. After successful negotiation, they can draw up to 500mA. This is to protect the operation of a 4 port hub, should it be plugged into a PC with all its downstream devices already attached.

Not all USB devices are compliant to the standard, but just draw full current anyway, USB toys commonly do this. Most PCs provide 500mA anyway, so it all generally works.

Dumb power supplies generally hold their data lines in particular states, to signal to the device being charged that they are a power supply, with a certain capability. Later standard revisions allow USB-C and PCs higher currents, and higher voltages (eek!) to be negotiated.

As noted in this Maxim whitepaper (Tutorial 4803: The Basics of USB Battery Charging: A Survival Guide):

Standard downstream port (SDP) This is the same port defined by the USB 2.0 spec and is the typical form found in desktop and laptop computers. The maximum load current is 2.5mA when suspended, 100mA when connected and not suspended, and 500mA (max) when configured for that current. A device can recognize a SDP with hardware by detecting that the USB data lines, D+ and D-, are separately grounded through 15kΩ, but it still needs to enumerate to be USB compliant. In USB 2.0, it is not strictly legal to draw power without enumerating, although much of present-day hardware does just that, and in violation of the spec.

Charging downstream port (CDP) BC1.1 defines this new, higher current USB port for PCs, laptops, and other hardware. Now the CDP can supply up to 1.5A, which is a departure from USB 2.0 because this current can be supplied before enumeration. A device plugged into a CDP can recognize it as such by means of a hardware handshake implemented by manipulating and monitoring the D+ and D- lines. (See USB Battery Charging Specification, section 3.2.3.) The hardware test takes place before turning the data lines over to the USB transceiver, thus allowing a CDP to be detected (and charging to begin) before enumeration.

Dedicated charging port (DCP) BC1.1 describes power sources like wall warts and auto adapters that do not enumerate so that charging can occur with no digital communication at all. DCPs can supply up to 1.5A and are identified by a short between D+ to D-. This allows the creation of DCP "wall warts" that feature a USB mini or micro receptacle instead of a permanently attached wire with a barrel or customized connector. Such adapters allow any USB cable (with the correct plugs) to be used for charging. Additional details on these port types are described in the USB Battery Charging Specification, Rev 1.1, 4/15/2009.

Some devices do not use the standard. Apple for one, created a different standard (before BC 1.1 was released) for their own devices, allowing them to distinguish between non-supported chargers, 500mA standard chargers (enumerated usb), 1A high current chargers, and 2.1A highest current chargers. This is done with varying voltage dividers on the DP and DM pins. Some other manufacturers have adopted that, and the regular standard, at the same time. Some IC manufacturers have created USB host/battery charger detection ICs which figure out what kind of charger is being used and adapt accordingly. 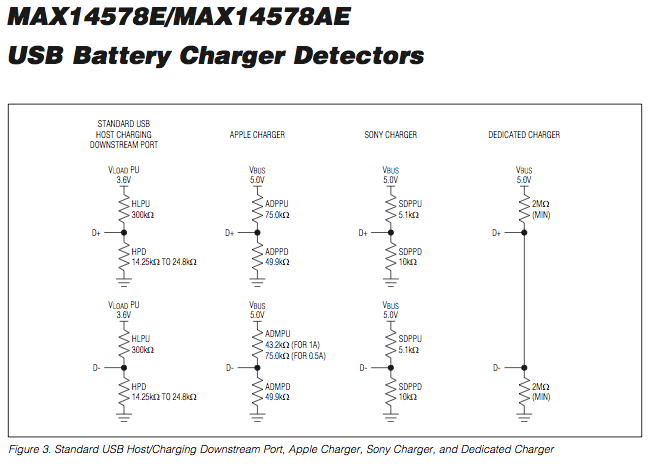 iPhones are one type of device that will not charge on an unenumerated standard downstream port. The Sony Playstation3 Wave Controller is another. Another method is that some require the ID pin on the mini/micro-usb connector to be grounded or otherwise connected.

Electronic – Are there downsides in using cat5 / cat5e cable for USB 3.0 connection

If you use the scheme given in the question, you will effectively end up with USB2 which has its own cableset within USB3.

It might be possible to combine the two ground wires and use 2 STP pairs for the two Superspeed lines, but I found no reference of this working.