The datasheet of this opamp says the input impedance is typically 100Meg. So I expect the voltage gain to be halved with a source resistance of 100Meg. But the following simulation doesn't reveal that and gain almost doesn't change:

Above the voltage gain is two. Applied input is 1V. So with a 100Meg source resistance I was expecting 1V output(half of the gain). But the plots show the gain is not affected from the source impedance and is still two.

There are other factors to consider such as input bias current (quoted at anything up to 4.5 nA). With 4.5 nA flowing from the input into 100 Mohm, that produces an offset error of anything up to 0.45 volts. That blows the effect of the input resistance out of the water.

But, realistically, with a simulation, it all depends on what is set up in the model parameters. Not all models accurately reflect all op-amp artifacts.

That figure is the differential input impedance and not the input impedance of one input to ground so, it will have much less of an effect. If you look on page 6 of the data sheet you will see that the common mode input impedance is graphed at about 280 Gohm. But like I said, input bias currents will always blow things apart at extremes.

I think the images you posted cover the math reasonably. Let me just try to give you a bigger picture view.

Output impedance is the change in output voltage due to a change in the output current. (I don't think your sources do a good job making this point, at least within the bits you cut and pasted).

So if you have negative feedback circuit, and the load starts to draw more current (say it has a switch inside it that gets closed), then what happens?

At first, the output voltage might drop, because of the internal resistance of the op-amp output circuit. But when it does, that will be conveyed by the feedback network back to the op-amp inputs, telling it to increase its output voltage. Which counteracts (mostly) that initial change. If the load current change is slow enough, you wouldn't even see the "initial" change before the feedback responded and eliminated it.

So the output voltage change of the closed-loop circuit is much smaller than it would have been without the feedback. This is the point your sources are trying to convey.

Normally it's no problem at all if the output signal you want to feed into the low pass filter has some non-zero impedance. It's just important to know what impedance it has.

Therefor you can use a voltage divider after a voltage follower (upper subcircuit). 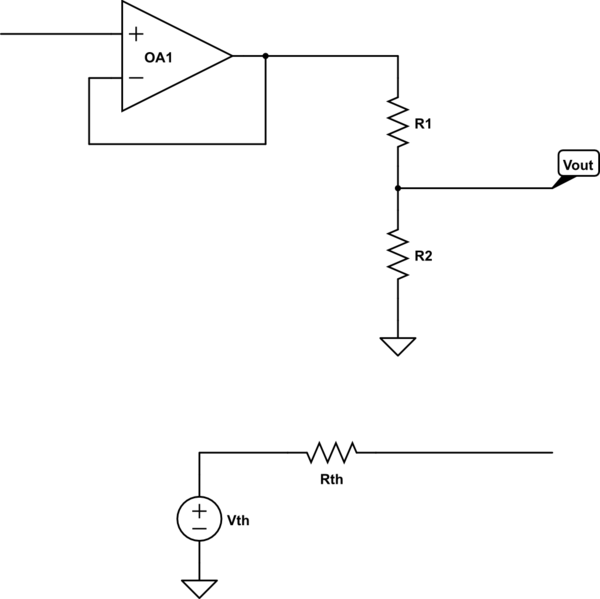