John Pierce named it, according to a PBS documentary in 2000. He worked with Shockley at Bell Labs.

Before Shockley sandwiched three semiconductor layers together, the only kind of transistor was the point-contact...uh, not "point contact transistor"! That word wasn't invented yet. "Point contact solid state amplifier"? But Shockley's invention became "transistor" for "transfer"+"resistor", but what sense, you ask, does that make?

Current flowing between emitter and collector is a "transfer" of charge. It is not a good conductor - it is a resistor.

Also, vacuum tubes were commonly characterized by "trans-conductance" as a measure of gain: output current divided by grid voltage. Transistors were supposed to be opposite of tubes in many ways - more reliable, use far less power, rugged not delicate, etc. The opposite of conductance is resistance.

There's no particular logic in characterizing the gain of a transistor by some output voltage over some input current, but for naming a sexy new gadget who cares. Today, and for the last few decades, bipolar transistor amplifier capability has been characterized by beta which is a pure number, current over current, and JFETs are characterized by, um... transconductance. (Also called "transfer admittance")

Why this transistor logic as switch is not working

I might be totally wrong here but my excuse is the question is very confusing. The circuit shown above is trying to pull the 2.52 V line down to ground through the 10R resistor and an NPN transistor. The original (pre-hacked circuit) you describe was it this? Forward and Reverse are mutually exclusive as are left and right. On the vehicles I've hacked into they usually have a spring loaded centre off action (joystick). Are you absolutely certain the pole of the switch went to ground (0v)? 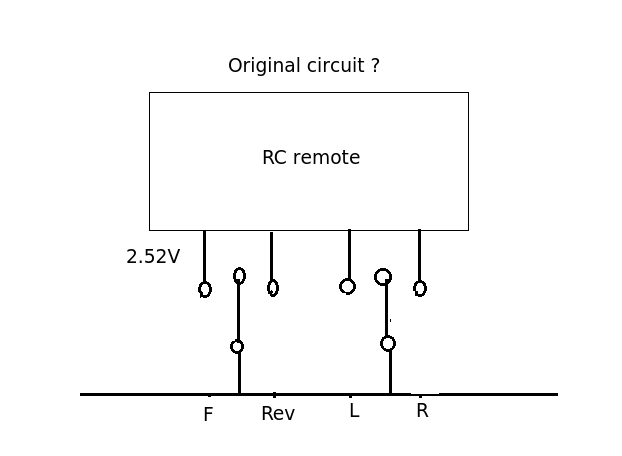 You say when you touched R2 (140k) the remote worked sending a signal to the car. This sounds like you were acting as an input signal. By touching the input your body as an aerial picking up the local EM field, the 140K resistor being large enough to prevent the weak signal from being shorted out. That suggests to me that the control input needs to go HIGH rather than LOW and that the switch was actually connected to the positive rail. To test this hypothesis connect up the circuit below and let us know what happened. 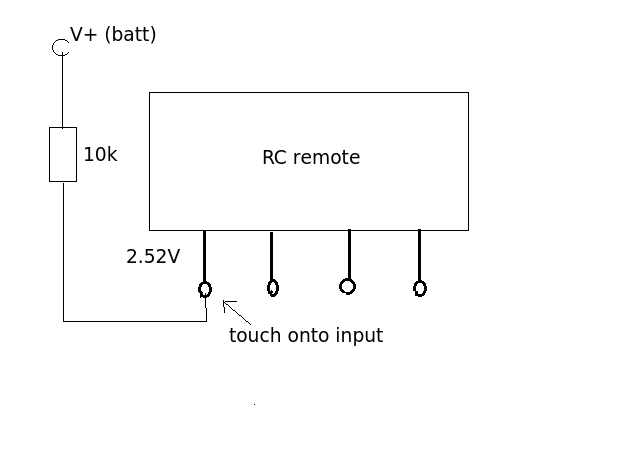 If you wish to avoid holy wars you'll need to avoid making simplistic and incomplete statements :-).

In both cases the spread of parameters during manufacturing is such that a circuit will almost always rely on feedback to produce a given voltage or current gain.

MOSFETs tend to be slightly more costly at the very bottom end for "jelly bean" applications. But, for switching more than a few ~100mA, MOSFETs are usually as cheap or cheaper than functionally equivalent transistors, are easier to drive from a uC (microcontroller) as a digital switch than bipolar transistors and tend to have very significantly superior on characteristics.

An "on" bipolar transistor exhibits a saturation voltage. This can be several tenths of a volt and to get it much under 0.1V usually requires a high base to collector current ratio that is undesirably high. At 1 A a 0.1 \$V_{sat}\$ (saturation voltage) dissipates 0.1 W and is the equivalent of a R = V/I = 0.1/1 = 100 \$m\Omega\$ transistor. But at 10A the figures are 1 Watt dissipation and 10 \$m\Omega\$. The 0.1V is very difficult to achieve at higher current levels.

As switching speeds rise MOSFETs need a gate driver to charge and discharge the gate capacitance. These can be relatively cheap.