I purchased a 5 volt power supply off Amazon. It runs from 120 VAC and produces DC power. It's a switch mode power supply. If I put a multimeter on the output it always shows approximately 5.0 VDC.

I ran into extreme difficultly in using this power supply for any sort of actual project. The output is extremely noisy.

Here is what the power supply looks like on my oscilloscope with no load.

Adjusting the time scale and voltage scale I saw this

The channel in blue is the output of the power supply. The channel in yellow is the output of a filter network I built. I used the low voltage side of a mains transformer and a large electrolytic capacitor. Here are pictures of those, although I doubt it matters at all. The inductor is wired in series with my load(if any), and the capacitor is parallel with the power supply. 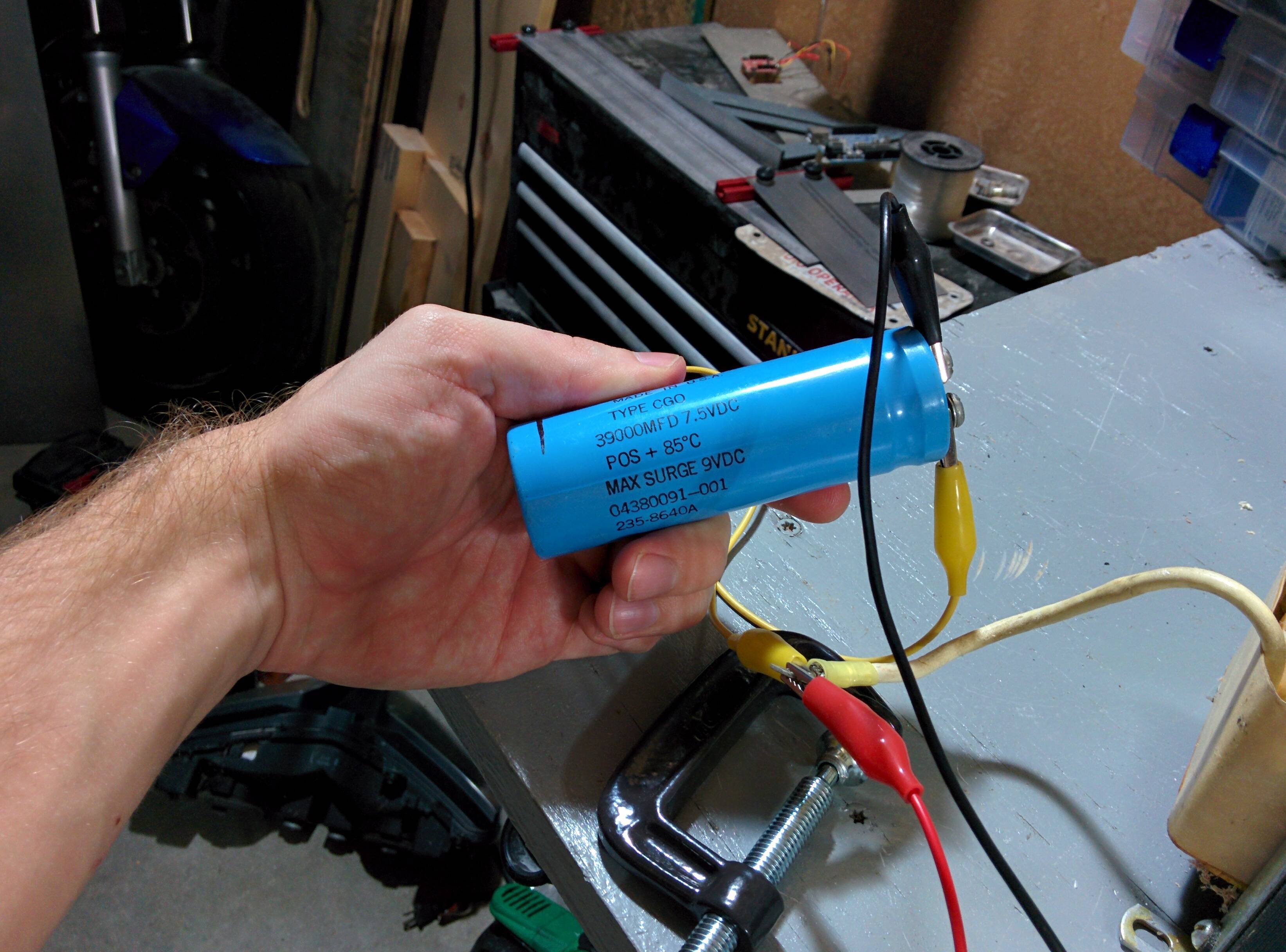 I decided to test just the power supply with a resistive load. I selected a 10 ohm resistor. This should provide a load of approximately 500 milliamperes.

Here is a small transformer removed from a switching power supply. I connected the 5 volts in series with the primary of this transformer. 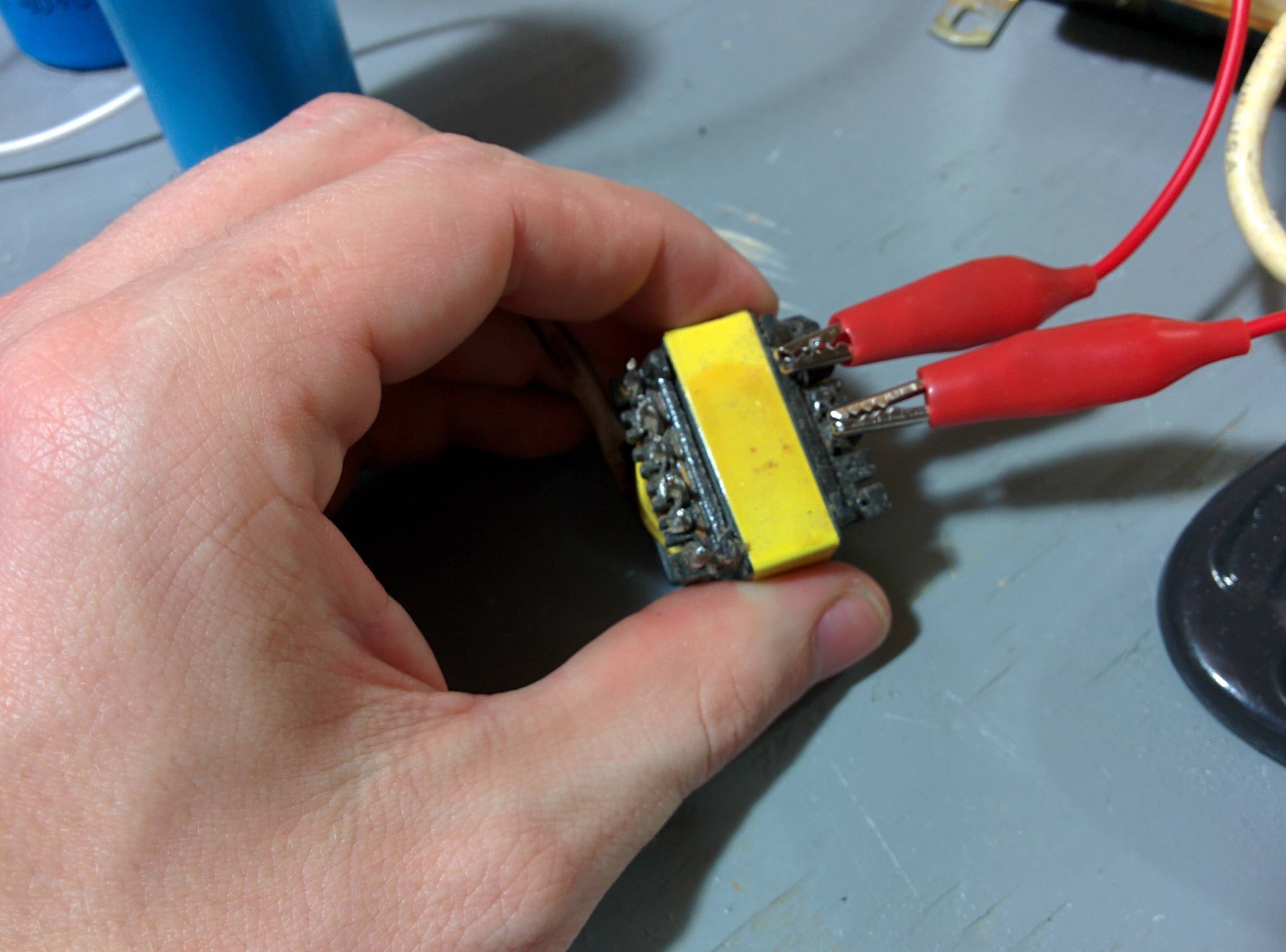 And the view from my oscilloscope:

It seems that almost any inductor filters out the oscillation with the period of approximately 3.5 microseconds. But that huge spike the precedes the oscillation remains. In this case the power supply jumps around by over 2 volts. 2 volts on a power supply meant for 5 volts is 40%.

The interesting thing about this is the capacitor seems to make no difference. It is old, but I've tried several and gotten the same result. They all have some capacitance, although it may be slightly diminished over time.

Why is the regulation of my 5 volt power supply so poor and how to address it?

Although I cannot imagine it would help, here is a picture of the power supply with its case off 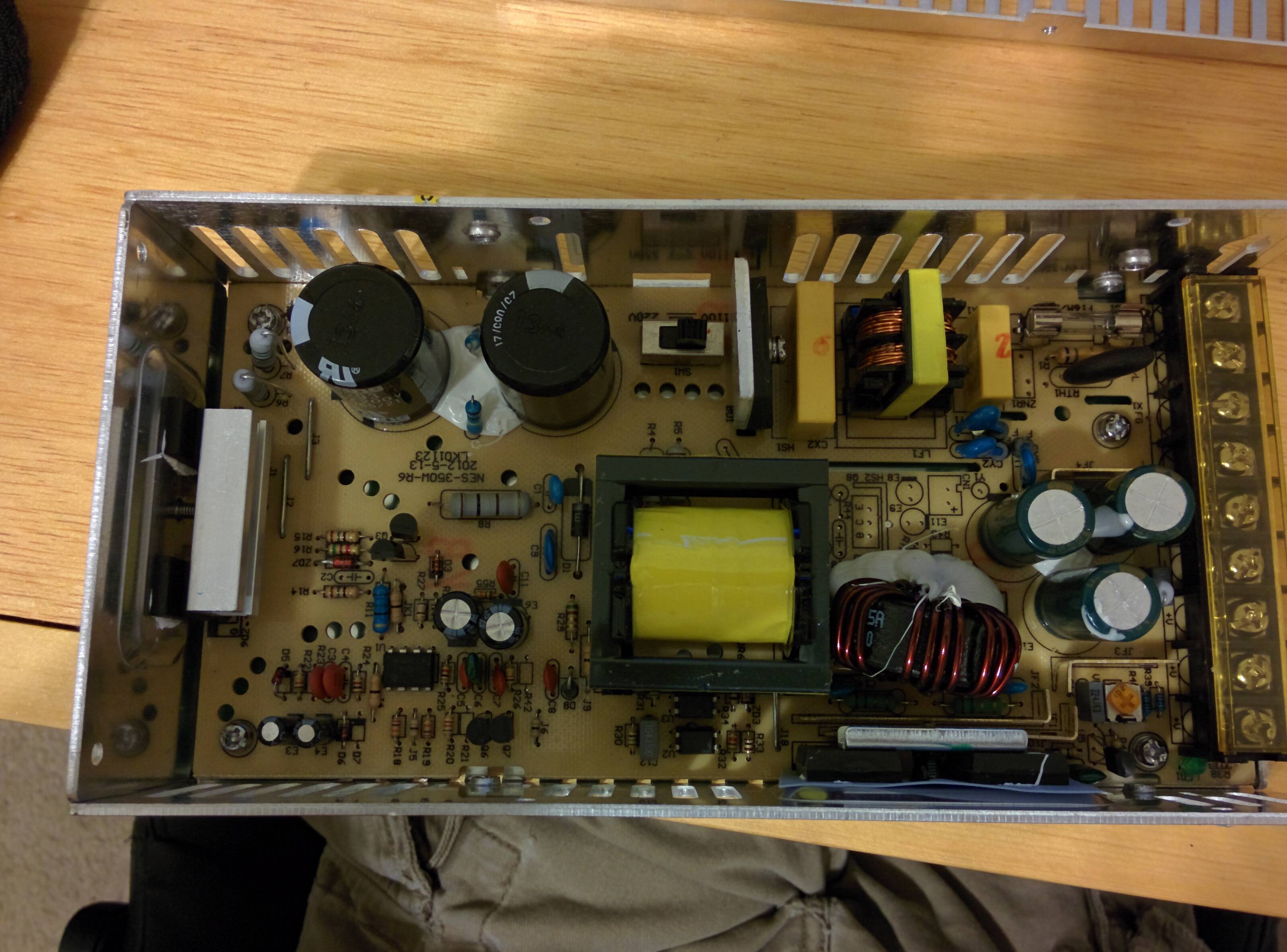 I performed an additional test with the mains transformer as a filter wired in series with 4 resistors. One of the resistors was the 10 ohm resistor, the other three were 6 ohm. This should give a resistance of 1.66 ohms for approximately 3.125 amps of current. This does not change anything significantly in the observed output. I reversed my probes in this test, so the colors in this screenshot are reversed as well.

Here is a closeup shot of the "spike" as I called it.

I also tried connecting a 1 microfarad capacitor across the power supply while it was driving the 10 ohm load. Here is what that looked like 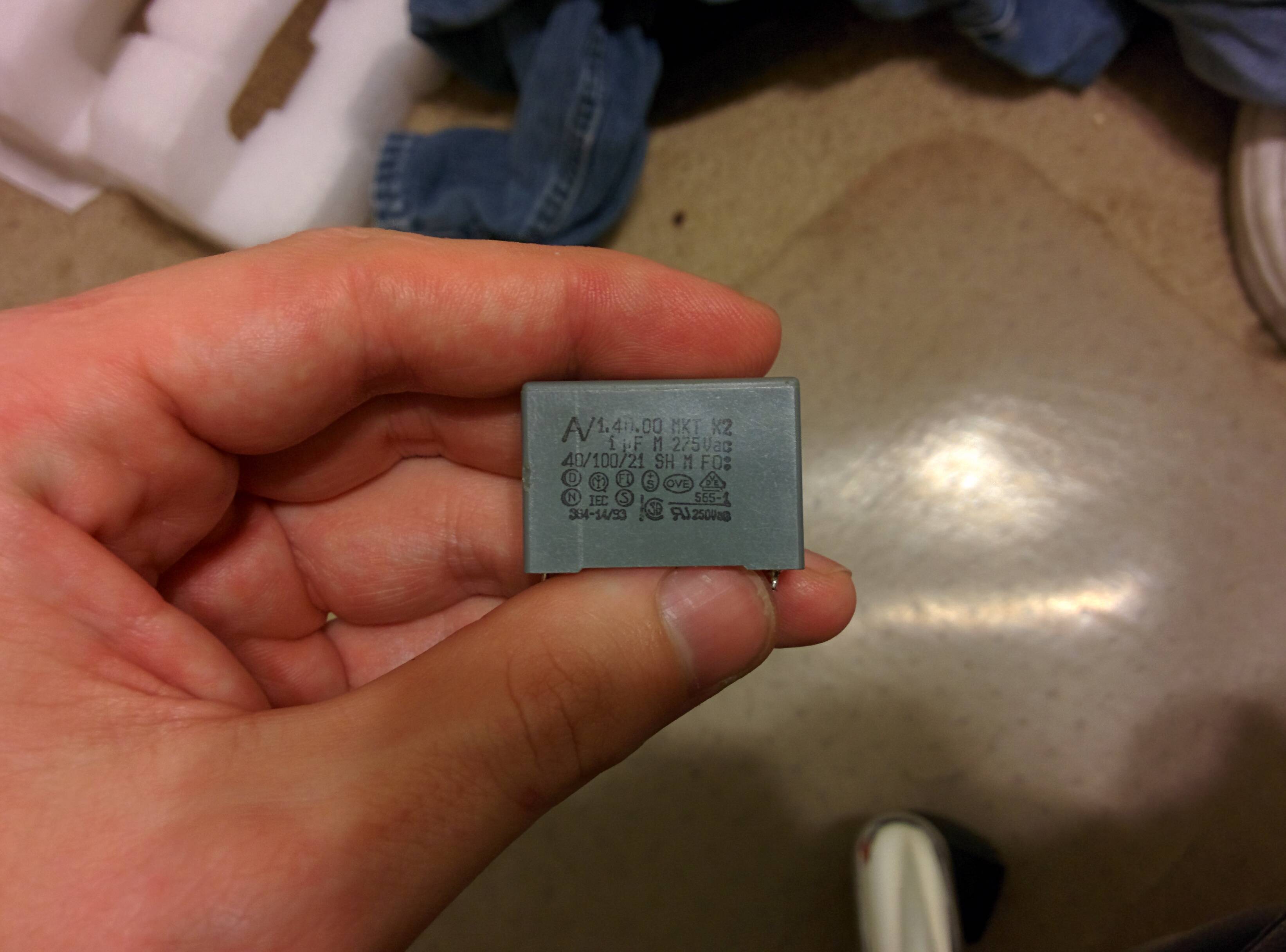 A 39000uF cap and a transformer winding is way too much for a filter.

I suspect your power supply is either defective, poorly-designed, or being operated way out of spec. The spikes are happening at a rate of ~85-90 kHz, which could be the switching frequency. The higher-frequency ringing afterward is clearly due to the spikes. If you can zoom in on the spikes with your scope, it might tell you (and us) more. A link to the Amazon page or a datasheet would also be helpful.

Regardless, your options are:

The Photon's suggestion of trying a larger load is also a good one.

It depends greatly on the exact power supply model, but in general I would not use it unless you example the schematics of your PSU.

In this schematics, +12V and -12V actually come from the same winding on the transformer. The only difference is -12V has PR1507 diode rated 1.5A, while +12V has U20C20 high speed, dual diode rated 20 amperes. So if your PSU looks like this, you can get +24V as long as you make sure the diodes do not overheat (it is quite possible that -12V diode has no proper heatsink, and thus it cannot handle full 1.5A for extended periods of time)

In this schematics, -12V comes from a separate transformer using 7912 regulator. If you try to draw too much current, either L4 will not be able to provide it, so the voltage will sag, or 7912 will overheat. D5 will then start conduting and your -12V line will measure around +0.7 volts. If your PSU looks like this, you should not try to get +24V from it.

The odd (to us, natch) setup is due to the use of standard parts, and linear regulators.

Assuming the STANCOR P-8667 (28V, 1A) and P-8380 (10V, 3A) were standard off the shelf (read: cheap and easily available) transformers, since Steve and Steve were building this, from scratch, in their garage, having sold their car for funding, and expecting to sell it as a partial kit. The customer would have to provide the transformers.

Then we figure out the best arrangement to maximize efficiency while minimizing heat. They only had linear regulators at the time, not very efficient, high drop out voltage, physically big. Not like today's high efficiency tiny switching regulators with millivolt drop outs. The LM323 for the +5V rail is a 3 Amp regulator. Assuming all 3 Amps were needed, that means 30 Watts through that lone Transformer, half of which is wasted on the Regulator. 15 Watts of heat right there. Same for the 12V reg, at 1 Amp, that's 28 Watts through the regulator, 16 Watts wasted.

Comparing the two numbers, we get a waste of 31 Watts in the chosen design, and 85 Watts in the Single Transformer, Series Regulator design. Did not account for any loses from the rectifier or transformers, minor in comparison.

Consider the cost of electricity, heat management, and the planned need for customers to source their own transformers, which two smaller ones would likely be easier to find than one beefy one, the design is the smart choice.

If you read anything about the construction of the Apple I, keep in mind, that it revolved around two cash strapped guys working out of a garage. Cost was always a concern. The thing didn't even use ram for the display, they used shift registers cause it was cheaper.