Based on this answer here in StackExchange and the Motorola article it cites, I've designed a dual h-bridge motor driver with push-pull transistors to switch the FETs faster, layed out a PCB in KiCad and built it.

The restrictions were to use only N-Channel FETs found in an old computer motherboard, and I had no gate drivers (actually I've bought a couple IR2110s, but they will take a long time to arrive).

When I tested this first version with a toy RC helicopter motor, it ran for a couple times, but eventually half of each h-bridge (there were 2 of them) got shorted (lots of smoke and all). Everything ran on 2 li-ion cells (7.4V) for VCC and a third small phone cell (3.7V) in series for a 11.1V total in Vdrive.

I used the multimeter to check and looks like IMZ1A couldn't pull the high side FETs down for some reason. Initially they could, but then they stopped working. The 2N7002s were all fine. Tried replacing both the shorted power FETs and IMZ1As for new ones, but the same problem happened again.

Tired of burning stuff, but still trying to prove the point a simple N-channel only bridge could be designed, I made this new circuit:

This one actually worked and is working till now, despite being very simple. The question is: why the first circuit didn't work? Is there anything wrong with the design?

EDIT: Acquired some waveforms for the last circuit:
This one under no load condition 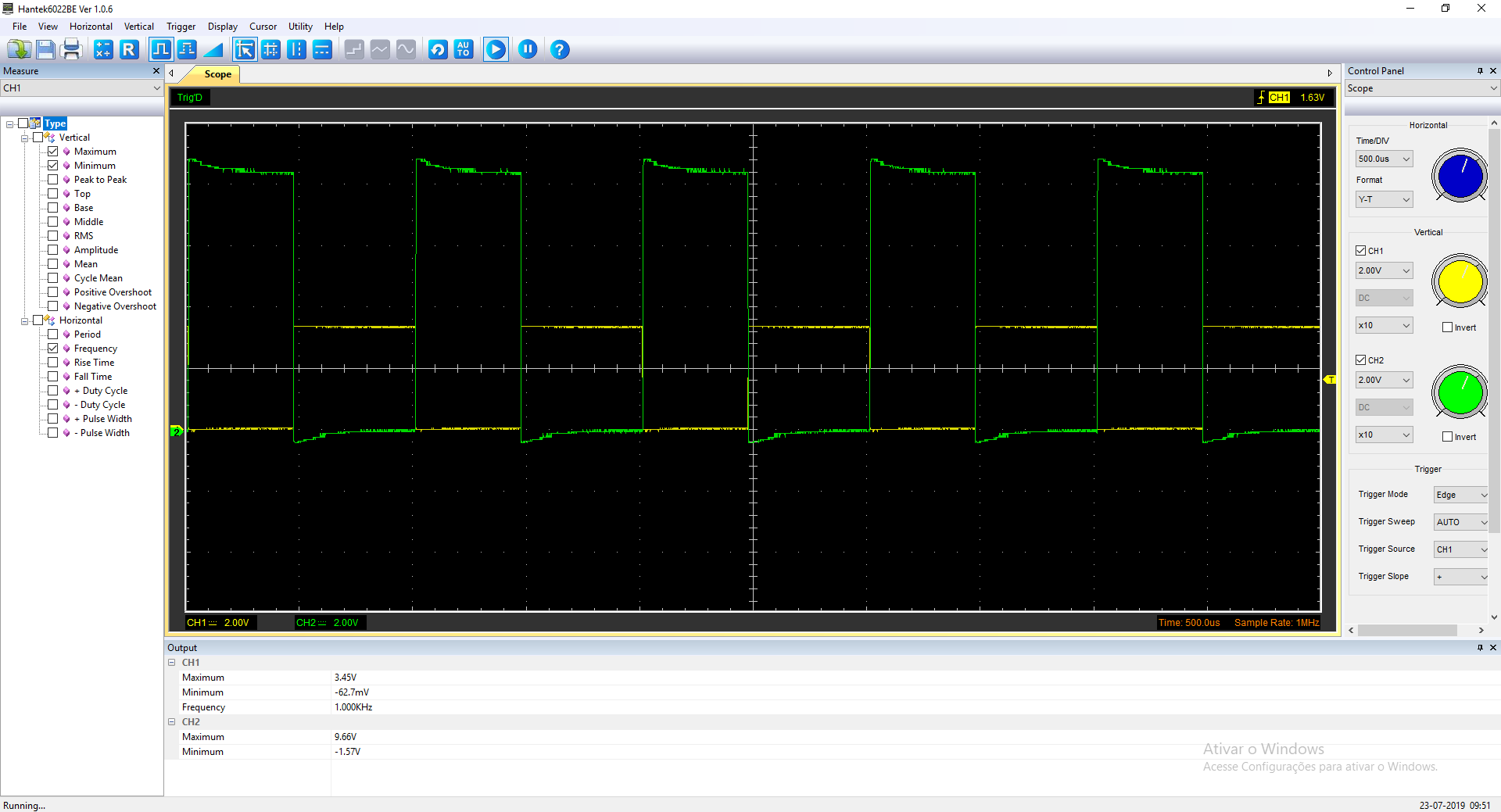 And this with the motor. Measured armature resistance was about 2.2R and inductance about 240uH. 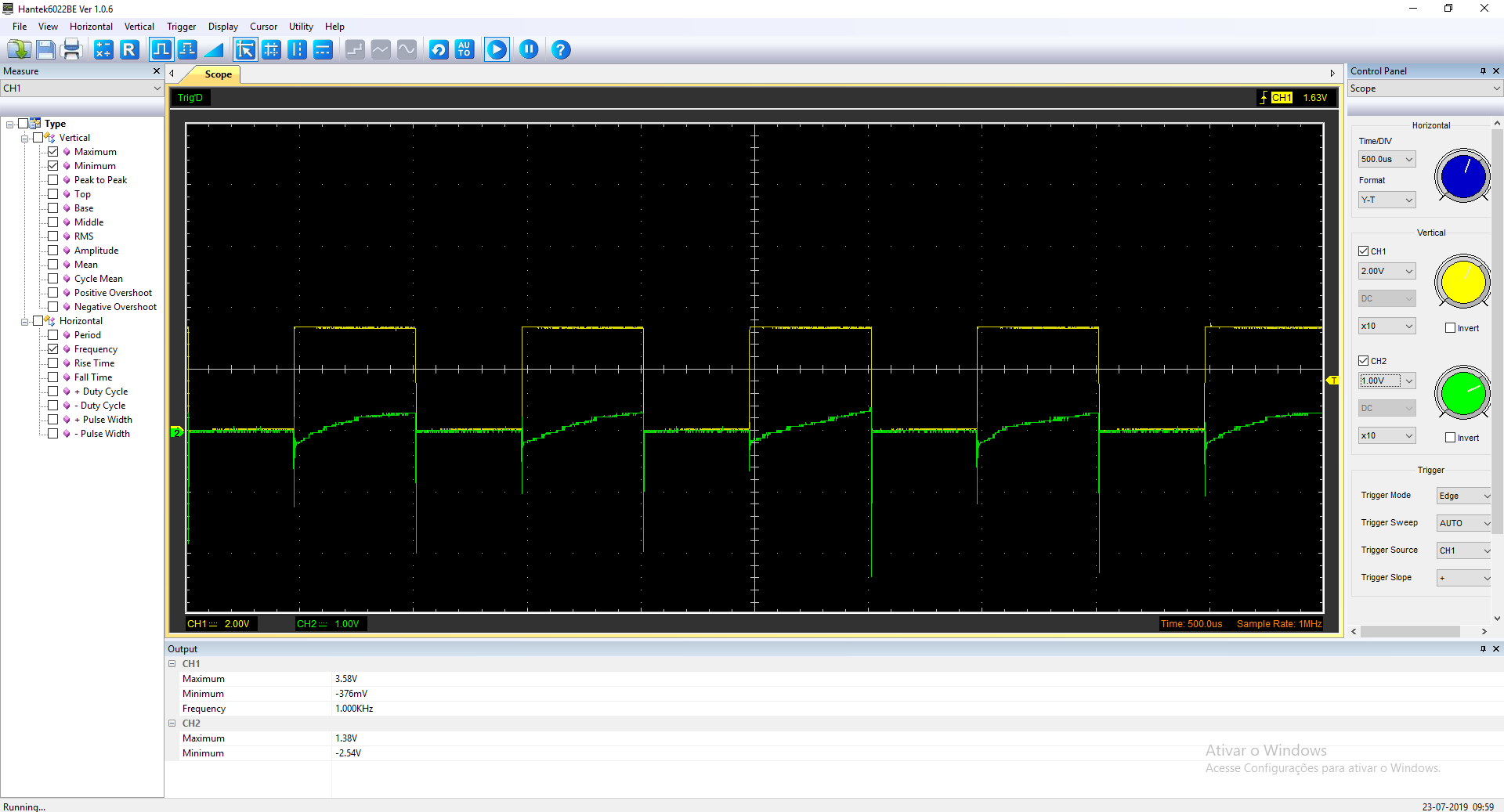 Both your circuits suffer from shoot-through issues. This is what happens when you do not give each transistor an independent control signal. The problem is may be worse in your top circuit since the high-side gate driver is much more effective than the low-side gate driver.

On the other hand, I don't know what R4 and R12 are supposed to be for since they just get in the way and could be making your high-side gate driver work worse than the lower one. Either, way the result is the same: worse shoot-through.

You stated in a now-deleted reply that R4/R12 was to limit current through Q3. This is not actually a problem because when Q3 is on, the current in of one branch is already limited by R3. In the other branch, the current that flows through the base-emitter of Q5B (which also flows through Q3) would blow out both Q5B and Q3...except it doesn't because Q5A is off. Get rid of them.

Finally, this is a much more fundamental issue that both your circuits suffer from which may require a re-design thus making all the previous points moot anyways: Your gate driver does not drive the high-side MOSFET gates with a voltage relative to the source. It drives them with a voltage relative to the ground, but the high-side MOSFETs cannot see the ground, nor do they care what it is. All they care about is the voltage between their gate-source terminals.

Think about it, suppose your gate driver turn on and current was flowing through the motor. The output node of the half-bridge connecting to the positive supply would rise in voltage towards Vcc. Thus, the source voltage for the high-side MOSFET would also rise. If your gate voltage is being referenced to ground, then your Vgs applied to the MOSFET rapidly decreases turning the MOSFET off (or worse, partially on). This is why you need floating gate drivers for the high-side MOSFETs and this is what fundamentally makes all N-channel H-bridges (and half-bridges) them more complex.

Electronic – Is this a good design for MOSFET H-Bridge

I'm not sure why you think BJTs are significantly slower than power MOSFETs; that's certainly not an inherent characteristic. But there's nothing wrong with using FETs if that's what you prefer.

And MOSFET gates do indeed need significant amounts of current, especially if you want to switch them quickly, to charge and discharge the gate capacitance — sometimes up to a few amps! Your 10K gate resistors are going to significantly slow down your transitions. Normally, you'd use resistors of just 100Ω or so in series with the gates, for stability.

If you really want fast switching, you should use special-purpose gate-driver ICs between the PWM output of the MCU and the power MOSFETs. For example, International Rectifier has a wide range of driver chips, and there are versions that handle the details of the high-side drive for the P-channel FETs for you.

How fast do you want the FETs to switch? Each time one switches on or off, it's going to dissipate a pulse of energy during the transition, and the shorter you can make this, the better. This pulse, multiplied by the PWM cycle frequency, is one component of the average power the FET needs to dissipate — often the dominant component. Other components include the on-state power (ID2 × RDS(ON) multiplied by the PWM duty cycle) and any energy dumped into the body diode in the off state.

One simple way to model the switching losses is to assume that the instantaneous power is roughly a triangular waveform whose peak is (VCC/2)×(ID/2) and whose base is equal to the transition time TRISE or TFALL. The area of these two triangles is the total switching energy dissipated during each full PWM cycle: (TRISE + TFALL) × VCC × ID / 8. Multiply this by the PWM cycle frequency to get the average switching-loss power.

The main thing that dominates the rise and fall times is how fast you can move the gate charge on and off the gate of the MOSFET. A typical medium-size MOSFET might have a total gate charge on the order of 50-100 nC. If you want to move that charge in, say, 1 µs, you need a gate driver capable of at least 50-100 mA. If you want it to switch twice as fast, you need twice the current.

Ultimately, it's a tradeoff between how efficient you want the circuit to be and how much effort you want to put into optimizing it.

So, the friendly folks at IR got back to me, and suggested I swap out the IRS2001 with a IRS2301. The IRS2301 has a VCC requirement of just under 5V, and will thus work for my application.

Now I just have to wait for the priority mail from Digi-Key...