This question already has answers here:
Why does electricity require a closed loop to flow?

If electrons move from the negative side to the positive side in a battery (thus creating electricity when they flow), why does the same circuit with two separate batteries not create electricity? 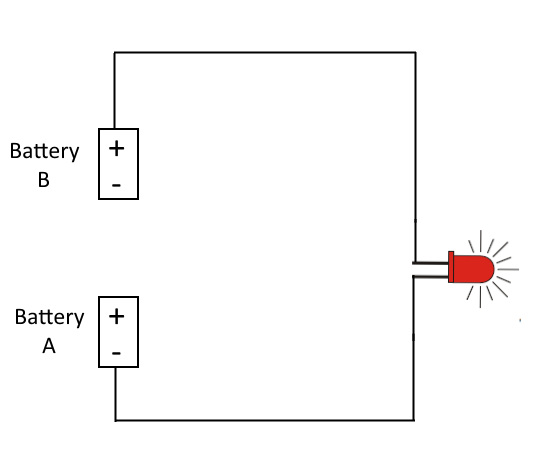 As you can see in the diagram, electrons should be moving from A to B because the wire is connected from A – side (high pressure) to B + side (low pressure). Why is there no electron flow?

Actually some current occurs when you connect the wires. It stops soon, maybe in few pico- or nanoseconds when the system has found a new balance.So, you cannot see anything, only some sensitive instruments could notice the change in the electromagnetic field or see the short light pulse. I even do not know if there exists light sensors that sensitive.

What balance? There really exists the electric field over the battery which pushes the electrons outwards from the minus pole and pulls them towards the plus pole. Only a medium where electrons can easily move is needed. If you connect the wire+led in your system, the electrons flow to the wire from battery A and some are taken off by battery B.

The basic fact: THE TOTAL AMOUNT OF CHARGE DOES NOT CHANGE. Battery A is soon positively charged and starts to pull electrons . Respectively B gets negative and starts to push electrons. The current weakens and stops when the generated opposite force compensates the pushing effect which is generated by the chemical reaction in the batteries.

In electric theory we have a concept named "capacitance". It depends on dimensions and materials. It tells how much charge a structure can take for a given voltage without having a fully closed conductive path for the current.

Just for your information: Chemical reactions are electron transfers from a material to another. The new electron orbit configurations bind the atoms together in a new way and we see it as a formation or disbanding of chemical compounds. Some chemical reactions have so high tendency to happen without external energy input and change the eloctron orbit configuration so heavily that we can see the tencency as electric voltage.

The confusion here is from the initial poor description of how a battery works.

The electrolyte acts like a filter that blocks the flow of electrons, but allows ions (positively charged atoms from the electrodes) to pass through. If the battery is not connected to anything, the chemical force is pulling on the ions, trying to draw them across the electrolyte to complete the reaction, but this is balanced by the electrostatic force-- the voltage between the electrodes. Remember-- a voltage between two points means there is an electric field between those points which pushes charged particles in one direction.

Thinking about two batteries next to each other, linked by one wire-- there is no voltage between the two batteries, so there is no force to drive electrons. In each battery, the electrostatic force balances the chemical force, and the battery stays at steady state.

(I kind of glossed over what it means for two materials to "want" to react with each other. Google "Gibbs free energy" for more details on that. You might also google "Nernst equation.")

Electronic – Why can’t we use diodes in place of batteries

As originally asked, the question was: