OK, calling me an amateur is being polite. But I am trying to learn more about how these circuits work.

One example I am learning from is the ZX Spectrum ULA book. There is a oscillator circuit on page 87 that is really confusing me. I can post a picture if anyone wants but it's mostly irrelevant for my question.

Anyway, that circuit has a transistor where the base and emitter are tied to ground. But, the collector is tied to the base of another transistor.

Everywhere I read about transistors, the water analogy is used. But I then read this reference (https://electronics.stackexchange.com/a/61787/32770) that used a natural gas analogy which really made sense to me. Basically, the emitter is a pipe that goes deep underground to highly pressurized natural gas. The base is a valve and the collector is a pipe that just goes into the air. By turning the valve (base) on, the gas (current) is allowed to flow upwards into the air. Which is opposite of the conventional current flow. This was an ah ha! moment for me.

But, looking back at the circuit, it would seem that a transistor's collector tied to the base of another transistor would be useless because the valve (original base) would always be "on". So why have it? Why not just tie ground to the base of the SECOND transistor?

I hope my question makes sense. I can post the actual schematic if people need it.

Here is the diagram. Hopefully it will explain my question better. 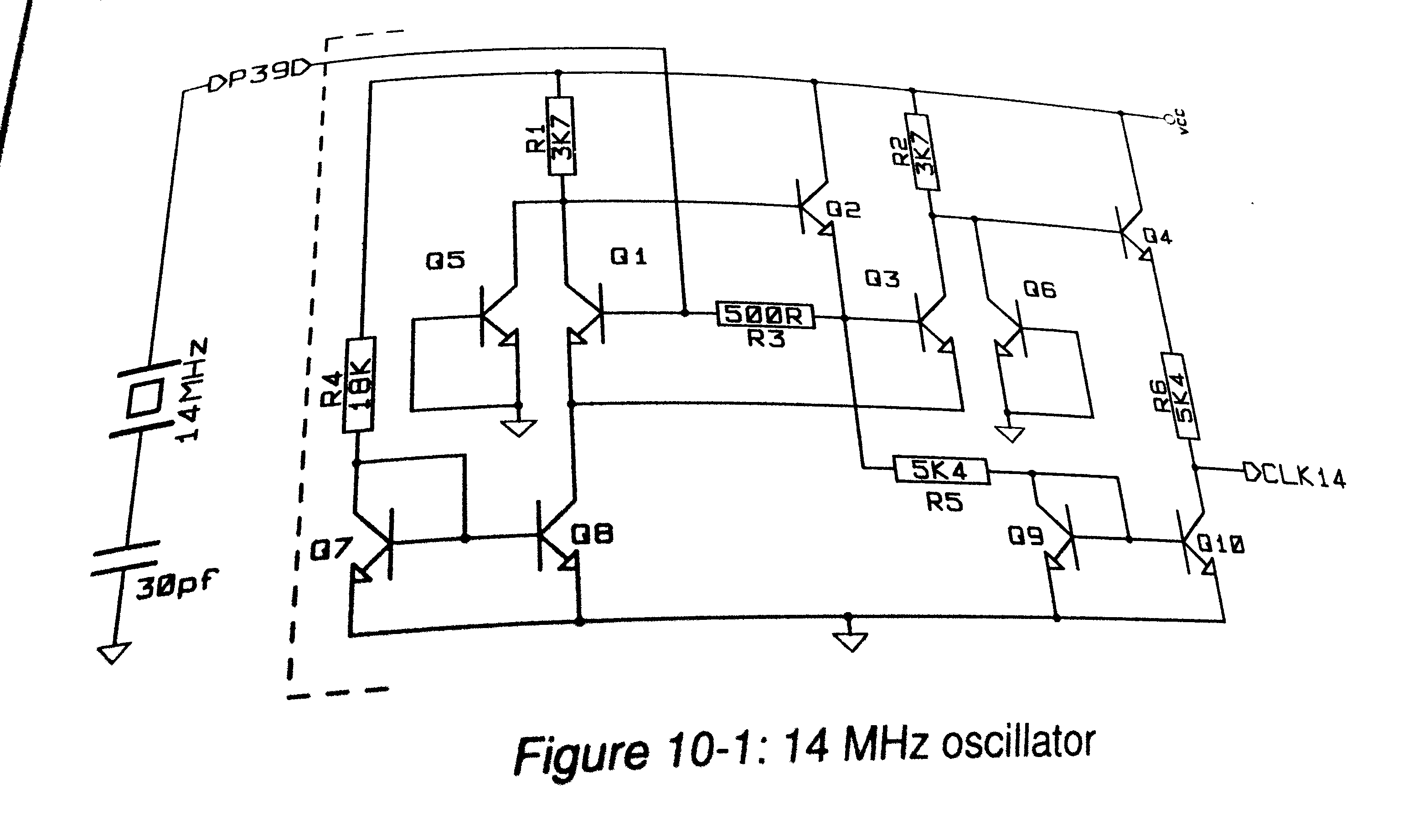 It's embarrassing but it appears that my ancient eyeballs could not see the original connections of the transistors and that the base's are connecting to other items as well.

Thanks to @Ignacio Vazquez-Abrams for pointing that out. If this is true, would you mind answering it? I want to give credit where it's deserved.

BTW, thanks for rasterizing that photo!

Oops. I got the order wrong in my original explanation, and have edited to reflect this. My apologies.

In your picture, Q5 and Q6 are being used as zener diodes. Current flows through the CB junction, which behaves as a reverse-biased diode. Since an NPN transistor has two PN junctions back-to-back, with the base grounded it looks like 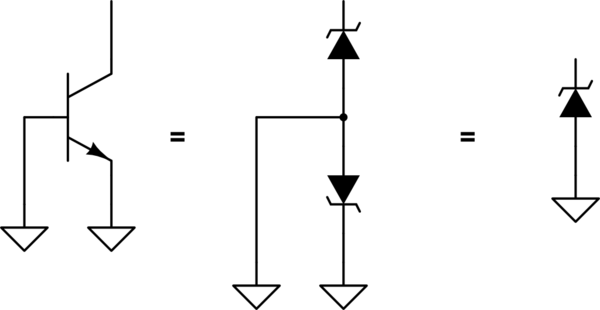 Note that you ordinarily avoid exceeding the voltages where a transistor junction will act like a zener, but that doesn't mean you can't do it when you want to.

The other configuration you show, consisting of 2 transistors with common bases and the emitter of one tied to the base, is widely used in IC design, and is called a current mirror https://en.wikipedia.org/wiki/Current_mirror.

In effect, the first transistor acts as a diode whose voltage (the base-emitter voltage) is controlled by the current forced through it by the collector resistor. If the two transistors are perfectly matched and thermally maintained at the same temperature, a pretty good description of adjacent transistors on an IC die, the current through the second transistor will be forced to equal the current in the first, since both have identical Vbe characteristics.

In cases 2 and 3 there is current flowing from the collector to the emitter.

You can saturate the BJT by attaching a smaller load (i.e. higher resistance) than the linear limit allows. Think of a pipe with a valve. If there's something clogging the pipe upstream, at a certain point no matter how much you open the valve you're not going to get any more fluid flowing through the valve.

Yes, the electrons do literally move to generate the current, though this isn't directly used for most electrical engineering analysis.

For most EE analysis we don't consider the motions of charged particles directly, instead relying completely on the abstract concept of current. This is an approximation of reality, but it turns out to be remarkably good in most cases.

Ironically, in my day-to-day work with plasma physics we do consider the motion of charged particles instead of relying on abstract currents because the analysis does differ depending on what species are moving and where/how fast they are moving.

Electronic – Transistors why does increasing base current increase collector current

Dave is correct... I'll try to clarify some more.

BJTs are designed with light doping in the base and a very narrow base width to maximize the diffusion of the emitter current to the collector. As a result, the base current needed to develop the Vbe for a given rate of emitter current injection is very small compared to the emitter and collector current, and so BJTs have high current gain.

Here's an online reference that goes into some detail: Modern Semiconductor Devices for Integrated Circuits, Ch. 8