I recently got an inexpensive (~$4 USD) Li+ 18650-powered flashlight from banggood.com, one of my favorite sources for inexpensive Chinese electronics to tear down and hack for fun 🙂

I wanted to validate its safety circuit before considering putting it into active service. I'm not liking what I found, but am wondering if I'm being too conservative. I'm having a hard time shaking visions of a Li+ battery charging on my counter bursting into flames suddenly 🙂

The flashlight takes a single 18650 non-protected Li+ cell. The flashlight won't turn on (draw any more than 10uA) when the voltage is below 2.37V. However, once on, it continues to draw current down to about 1.95V. Also, until it reaches that shut-down threshold, the turn-on "hysteresis" is defeated; that's basically how I've defined shut-down.

Here's my test setup. Only the LED holder and switch assembly are shown; everything else is mechanical (and ground conductor): 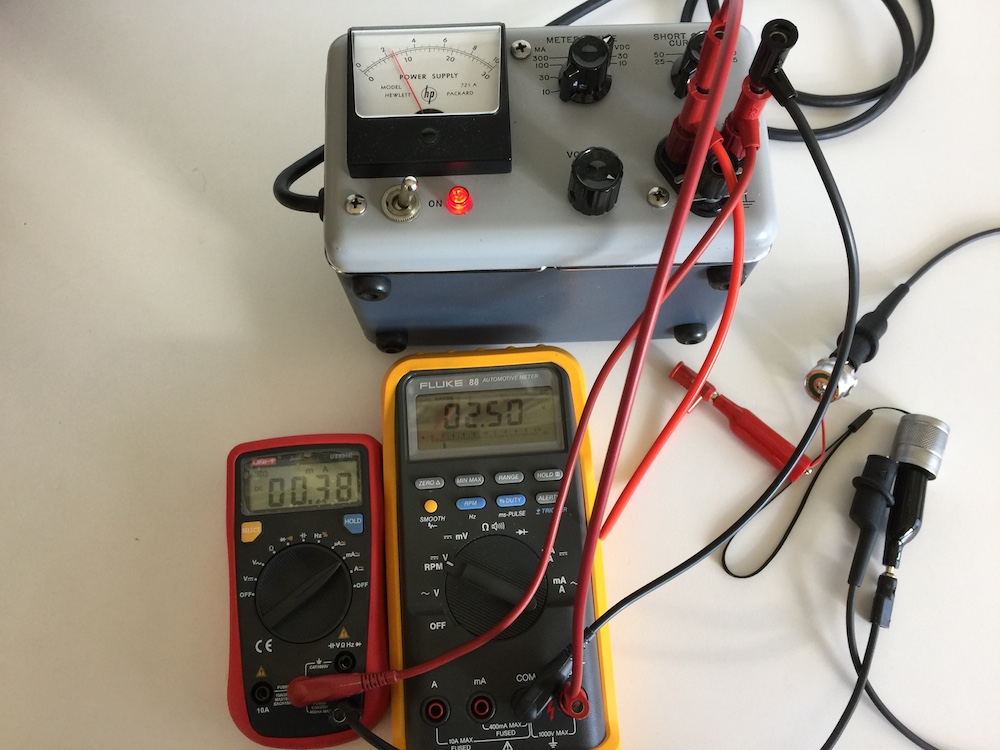 Here's a table of the various voltages (on the way down, lower brightness setting):

And on the way up:

After this on the way up the V-I characteristics match those on the way down.

So I do note that the current consumption falls precipitously at about 2.5V on the way down (2500 -> 165 uA), and that nothing much happens at all until 2.4V on the way up. What I'm wondering is whether this is enough to constitute adequate protection.

The scenario I'm imagining is that someone places the flashlight vertically, lens down, on a desk, and then forgets it's turned on since the light isn't visible. If left for a couple weeks like this, I'm thinking the battery would discharge to levels that would make it prone to violent misbehavior on re-charge.

What I rather expected to see was the current drop a little sooner, say 2.7V, since the discharge rate wouldn't be great enough to allow much recovery. Then not take more than protection IC current up to about 3.0V on the way up.

The true problem is the invisible damage that happens inside the cell, producing a few atoms short of a major short-circuit, until a little vibration, jarring, or a dropped flashlight, moves it the rest of the way, completes the circuit, and you find out you're holding a roman candle.

In order for this flashlight to be safe with this battery, it would have to have a more active cutoff, because without it, you will eventually reach the 1.5 voltage point, and then this happens:

At battery university, at "BU-808a: How to Awaken a Sleeping Li-ion", the following section can be found:

Do not boost lithium-based batteries back to life that have dwelled below 1.5V/cell for a week or longer. Copper shunts may have formed inside the cells that can lead to a partial or total electrical short. When recharging, such a cell might become unstable, causing excessive heat or show other anomalies.

Then, also at Battery University, on the page, "BU-304b: Making Lithium-ion Safe", it contains this little gem of what might be considered a good example of ultra-cheap-manufacturing double-speakery:

The Longer I Think About This...

So, what happens if you charge the over-discharged battery, and it has shunts, but they smolder, or otherwise don't actually cause a problem until you've fully charged the battery, and screwed it up tight in the flashlight. Do you now have a grenade? I just wouldn't play with this. Convert it to use protected-cells, if you just can't let it go to waste. Let's say somebody else accidentally gets this flashlight? (a thief breaks in, and takes your flashlight for his little girl). Don't let it happen... I know... Put it through your own version of the inquisition: "convert, or die!" ;-)

In a talk by Professor Jeff Dahn of Dalhousie University entitled "Why do Li-ion Batteries die, and how to improve the situation", we find out the following things: Over-discharged cells are not dangerous until you recharge them. When Lithium ion cells are made, apparently, their ingredients are relatively safe, because Jeff says that you can assemble them in the open air. But when you charge them, both anode and cathode (and it's a jellyroll, so you have plenty) become very reactive.

So, then, based on Jeff's talk, if a Lithium ion cell is fully discharged, then it is no longer dangerous, but should at that point no longer be used, but recycled. I run mine down to zero volts, then I put them in a group to be recycled together. If somebody else should throw them away, they shouldn't cause a fireworks show in the trash truck while it's compacting because they have no stored energy, and there is no longer the highly reactive intercalated Lithium.

Charging Only to 4.1 Volts is Best

In the same video, which I consider to be some of the most authoritative information on the subject (I've watched the video many times for that reason), Jeff says a few things which stick in my mind and I want to pass on:

You are making this way too complicated. You don't need a opamp and a logic gate to perform your very simple logic. The on/off switch can simply be wired in series with the supply and act like a normal on/off switch. The inversion you want from the momentary button can be accomplished by a single transistor:

Q1 acts like a low side switch, with R2 providing it's base current and thereby keeping it on. When SW1 is pressed, it shorts the base to ground, which turns off Q1. The LED and buzzer are wired in parallel, not in series as you had them. It is unlikely both need the same amount of current. The LED will have about 10mA thru it when on, which lights a ordinary LED bright enough for most purposes.

Nearly the full 12V will be applied to the buzzer. You didn't say what voltage the buzzer was rated at, so I picked 12V just for example. That's a common voltage for buzzers, but they are certainly available in other voltages too. Some buzzers can appear inductive from the outside circuit point of view, so D2 protects the circuit from the inductive kickback when the buzzer is turned off. Buzzers can also make a lot of high frequency electrical noise. C1 is there to shunt most of that locally to reduce the radio interference and other bad effects from this.

Doing so even once will result in a sudden, severe, and permanent capacity loss on the order of several dozen percent or more, as well a similar and also permanent increase in internal resistance. This damage occurs after just one isolated 'cold charging' event, and is proportional to the speed at which the cell is charged.

But, even more importantly, a lithium ion cell that has been cold charged is NOT safe and must be safely recycled or otherwise discarded. By not safe, I mean it will work fine until it randomly explodes due to mechanical vibration, mechanical shock, or just reaching a high enough state of charge.

Now, to actually answer your question: why is this?

This requires a quick summary of how lithium ion batteries work. They have an anode and cathode and electrolyte just like any other battery, but there is a twist: lithium ions actually move from the cathode to anode during charging and intercalate into it. The gist of intercalation is that molecules or ions (lithium ions in this case) are crammed in between the molecular gaps of some material's lattice.

When most of the lithium ions are intercalated into the cathode (meaning the battery is in a fairly discharged state), the cathode material will expand slightly due to volumetric strain (because of all the extra atoms wedged in between its lattice), but generally most of this is intercalation force is converted to internal stresses (analogous to tempered glass), so the volumetric strain is slight.

During charging, the lithium ions leave the cathode and intercalate into the graphite anode. Graphite has is basically a carbon biscuit, made of a bunch of graphene layers to form an aggregate biscuit structure. American biscuit structure.

This greatly reduces the graphite anode's ability to convert the force from the intercalation into internal stresses, so the anode undergoes significantly more volumetric strain - so much so that it will actually increase in volume by 10-20%. This must be (and is - except in the case of a certain Samsung phone battery anyway) allowed for when designing a lithium ion cell - otherwise the anode can slowly weaken or even ultimately puncture the internal membrane that separates the anode from the cathode, causing a dead short inside the cell. But only once a bunch of joules has been shoved into the cell (thus expanding the anode).

Ok ok, but what does any of this have to do with cold temperatures?

When you charge a lithium ion cell in below freezing temperatures, most of the lithium ions fail to intercalate into the graphite anode. Instead, they plate the anode with metallic lithium, just like electroplating an anode coin with a cathode precious metal. So charging will electroplate the anode with lithium rather than, well, recharging it. Some of the ions to intercalate into the anode, and some of the atoms in the metal plating will intercalate later over 20+ hours if the cell is allowed to rest, but most will not. That is the source of the capacity reduction, increased internal resistance, and also the danger.

If you've read my related answer on stack exchange to the question 'Why is there so much fear surrounding lithium ion batteries?', you can probably see where this is going.

This lithium plating of the anode isn't nice and smooth and even - it forms in dendrites, little sharp tendrils of lithium metal growing on the anode.

As with the other failure mechanisms which likewise are due to metallic lithium plating of the anode (though for different reasons), these dendrites can put unexpected pressure on the separating membrane as the anode expands and forces them into it, and if you're unlucky, this will cause the membrane to one day fail unexpectedly (or also immediately, sometimes a dendrite just pokes a hole in it and touches the cathode). This of course makes the cell vent, ignite its flammable electrolyte, and ruin your weekend (at best).

But, you might be wondering, "why do below-freezing temperatures cause lithium metal plating of the anode?"

And the unfortunate and unsatisfying answer is that we don't actually know. We must use neutron imaging to look inside functioning lithium ion cells, and considering there are only around ~30 (31 I think?) worldwide active research reactors (nuclear reactors that act as a neutron source) that are actually available for scientific research at a university rather than used for medical isotope production, and all of them booked 24/7 for experiments, I think it is just a matter of patience. There have only been a few instances of neutron imaging of lithium ion batteries simply due to scarcity of equipment time.

The last time this was used specifically for this cold temperature problem was 2014 I believe, and here is the article.

Despite the headline, they still haven't really solved exactly what it is that causes plating rather than intercalation when the cell is below freezing.

Interestingly, it is actually possible to charge a lithium ion cell below freezing, but only at exceedingly low currents, below 0.02C (so more than a 50 hour charge time). There are also a few exotic cells commercially available that are specifically designed to be chargeable in cold temperatures, usually at significant cost (both monetarily and in terms of the cells' performance in other areas).

Note: I should add that discharging a lithium ion battery in below freezing temperatures is perfectly safe. Most cells have discharge temperature ratings of -20°C or even colder. Only charging a 'frozen' cell need be avoided.