I have built a small and very simple flyback SMPS based on NE555N IC. The circuit
exactly I did built from is shown below: 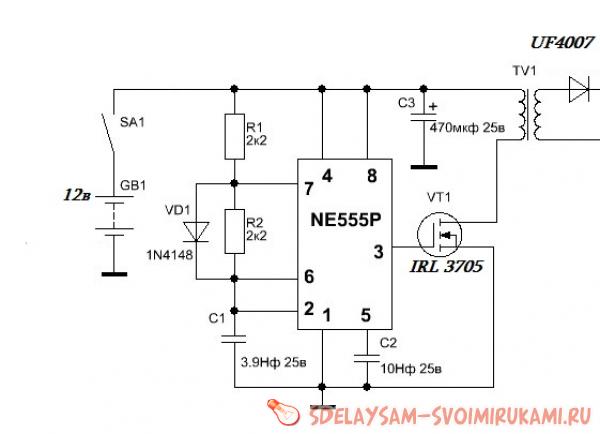 It works nicely for small loads.

However I have some issues with it:

Impulse transformer was salvaged from old dead 200W ATX SMPS, its sizes are (WxHxD) 36x42x16 mm. Its main problem that it's cracked (but still works without noises).
Primary has 8 turns of 1mm wire, secondary has 160 turns of 0.3mm wire; another secondary has 3 turns for 5 volts source (also 1mm wire).

Heatsink sizes are 32x39x14 mm probably aluminum (also from old hardware). Larger heatsink is avoidable because of limited space where circuit will be stored.

Does MOSFET overheat due to undervoltage on gate (hence not fully opened) or cracked transformer core? Do I need some other enhancements for this circuit?

Despite NE555N datasheet says output (pin 3) voltage is only about 2 volts lower than Vcc, I have only +6.3v on pin 3. Is it a digital multimeter misreading?

A ordinary digital multimeter will average the pulse train on the gate of the FET into what looks like a DC level.

An NE555 is a poor choice for driving a MOSFET (even logic-level) as it cannot sink and source much current. Put a monolithic MOSFET driver IC between the 555 and the MOSFET and your power dissipation will improve.

Does MOSFET overheat due to undervoltage on gate (hence not fully opened) or cracked transformer core? Do I need some other enhancements for this circuit?

Get an oscilloscope (even a relatively old one) and probe the switching nodes. It's the only way to really know what's going on in the circuit.