I'm trying to build a network configuration where clients can connect to some servers in a VPN via a Zywall USG 200 router/firewall.

The architecture is composed by a windows server 2013 that acts as VPN gateway and some other servers connected directly to it via IPSEC/l2tp with PSK. Some computers in a LAN should be able to connect to these servers without connect directly to the VPN itself. To my somewhat limited networking knowledge this could be accomplished by connecting the Zywall to the VPN and then setup some routing (and firewall) rules to enable the clients to reach the VPN network.

I recommand a zywall at both end if you can. (Your question is almost a duplicate of that one by the way)

For your question please see there for a guide, and some link. (zywall is not wrote).

To see some example to configure the zywall to other type network gear to make a site to site vpn, there is some resources (there and there).

Windows Server 2012 R2 gateway can be configured for point-to-site (P2S) VPN, site-to-site (S2S) VPN, dynamic BGP Routing or a combination of these features. The P2S VPN support and its interoperability on the Windows Server 2012 R2 remains unchanged and the details are available here. The dynamic BGP Routing support is the implementation of standard BGP4 protocol. This enables the dynamic BGP routing to be configured between the Windows gateway and the secondary branch site (provided the site is using a Windows or a third party BGP4 router).

We have validated a set of standard third party S2S VPN devices in for interoperability with Windows Server 2012 R2 VPN gateway. These compatible devices are listed below along with the example configuration for these device families to help configure your VPN device.

If you opt for a zywall at both end, there how I see it, and the official guide to do it by zywall there. 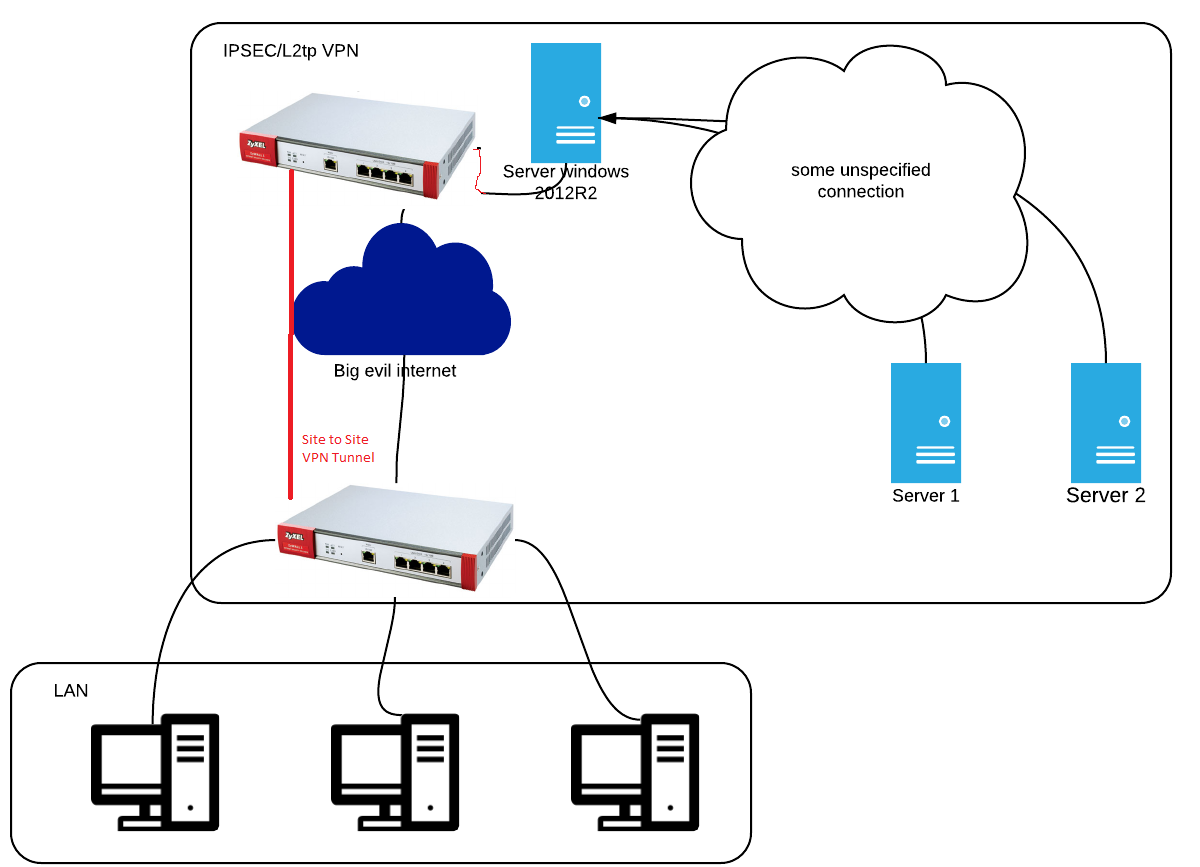 Figured it out. I'm no expert, so I don't know why this works, but I was able to get a connection by adding the following lines to the conn L2TP-PSK-noNAT section of ipsec.conf:

To my knowledge there is no android support for SCEP or NDES enrollment... we need to have a way to open enroll these devices through an application, but none exist to date. To my knowledge, android only supports the certificates to be installed from the SD card. It is odd to me that iphone supports NDES but android does not.