I have a maxbotics Ez1 plugged to an arduino

but i was wondering how to build a digital tape measure and to connect it to an arduino, for measuraments longer than 10 feet, maybe 20, 30 feet or more…

I see Stanley sells a digital tape for $29.9 at Sears… I could hack that, but there is anything out there with longer range that ez1

does anybody sells anything appropriate?

As background to hacking an existing LASER rangefinder, here is an extremely good account of one man's Attempt tounderstand and serially interface a Aparkfun Prexiso LASER rangefinder - he failed but gives extremely interesting and probably useful information of what he found.

A Doppler RADAR using RF operating at a few hundred MHz - possibly using a Gunn door opener module from days of yore, can have a range of 'very large'. I once owned an APN1 Radio Altimeter from a Bristol Freighter (aircraft) and it managed 1000's of feet with ground as the 'reflector' - lots of ground admittedly - and used acorn tube thermionic valves. You should be able to get as much range as your heart may desire using RF.

The APN 1 used a simple but useful method to NOT have to measure time of flight explicitly. Time of Flight (TOF) measurement is possible but at short ranges involves VERY short times. A nanosecond is a light-foot time wise!.
The APN1 transmitter was frequency swept and the received reflected signal was mixed with the current transmitted signal. The returning signal wis at the tx freq when the signal left and the tx freq has been swept to some other frequency by the tome the signal returns. The difference frequmcy, obtained buy mixing tx and reflected signal, gives a direct measure of range. 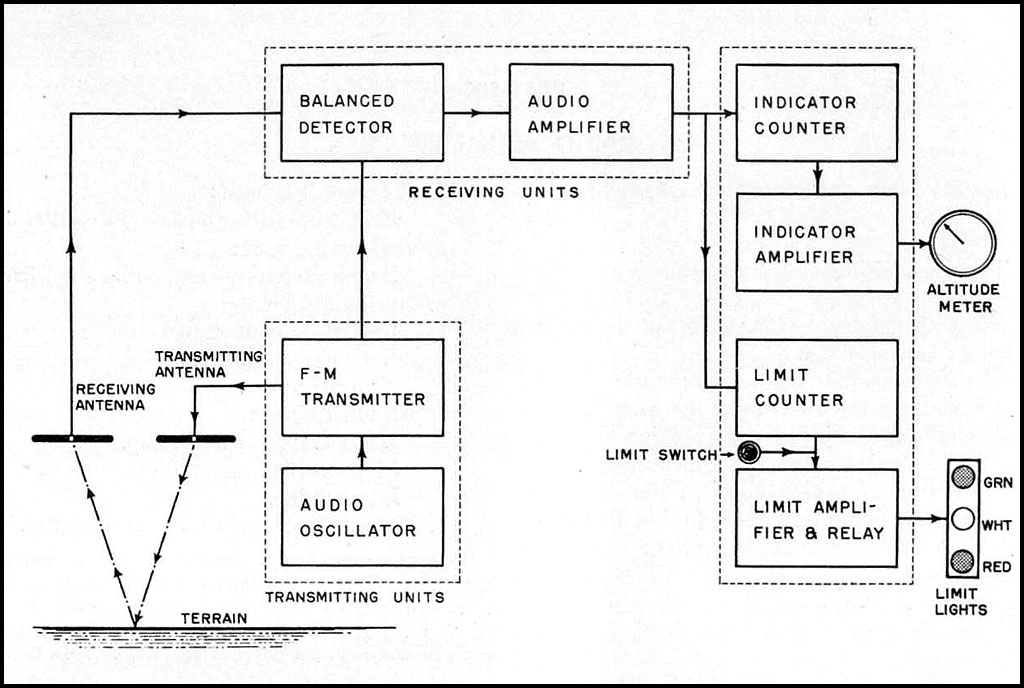 You can decide at what range the degrees change is too hard to read accurately.
A longer baseline decreases the position in the table. eg a 2 metre baseline gives 30/2 =15 degree effective result.

I included the APN1 main circuit diagram as much for fun to show what could be done in 1940 with Acorn tubes BUT in gact it is potentially useful for ideas. The diagram above is readable if you look at it full size as supplied. (Right click and then copy or save or open).This is "as supplied" quality -somebody has scanned the original to a gif in 2 colour "black & white".

I have copied part of the circuit below and added notes. Something like this could be done with modern components with "relative ease" [tm].
The key special magic is provided by the modulator - here a voice coild driven variable capacitor wihich scans the transmitter across a frequency range. The modern equivalent is a varacror diode - variable capacitance with reverse voltage. The oscillator at right middle drives this modulator.
The transmitter is a pair of push-pull acorn tubes driving the transmit aerial at bottom left. A "sniff" [technical term :-) ] of RF is sent from the TX to the RX at top left. A balanced detector - here a pair of Acorn tubes V101 and V102 bu nowadays a Schottky diode ring mixer or similar take the TX sniff and the received echo and mix them to provide a difference signal at the output at top right. This is then amplified as the range signal. Implementing this with "solid state" parts would result in a simple and possibly even effective result. Transmitter beam width would be a major consideration. A GHZ or so oscillator and a lonnnnnng Pringles can antenna (or two) may be enough. Modern cellphone and WiFi components are so readily available (surplus if needs be) that the "hard" RF aspects could be covered by premade parts. 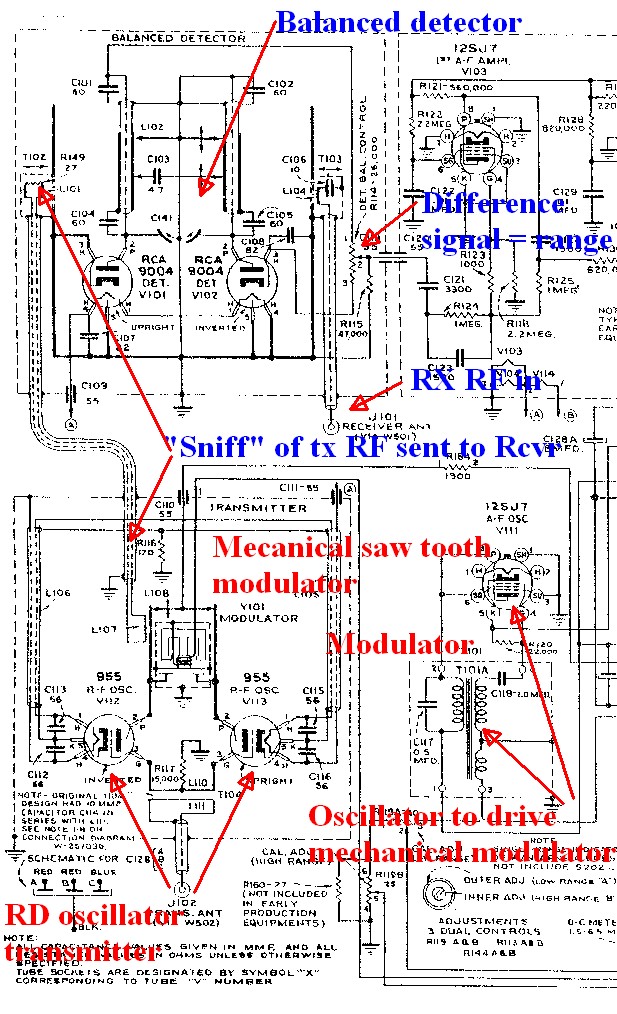 There are multiple options for such a thing.

Your best bet I think is to use a PIR sensor like this one.

You have two problems right now that are separate from each other.

First, you need to introduce a delay into your interrupt function so that it won't keep registering each rise and fall of the bounce as a separate button press. Use "delayMicroseconds()" because apparently you can't use regular "delay()" inside interrupts. Id suggest a 20,000 microsecond delay.

Second, you need to put a pull down resistor onto the digital pin that you are sampling.

The problem you are having is that the pin is in input mode and thus at high impedance (very high resistance) and thus has a tenancy to "float". If you put a voltage to it, it charges up like a capacitor and since the pin itself has very high resistance to ground, it takes a while for the charge to dissipate to the point where the Arduino will register a LOW again. A 10k resistor from the pin to ground will force the "capacitor" to discharge quickly after current from the button has stopped flowing.

Finally, the Arduino is pretty quick at it's read/write operations (I'm a mechanical engineer, ALL electronics happen "quickly" in comparison to mechanical systems, so it's relative I guess). Here's a link to some test results.