I'm working on a little project I call my "Green Box". Basically, I'm trying to drop my electric usage as low as possible, without losing the convenience of my gadgetry.

So far, I'm incorporating a passive IR sensor for motion detection, an ambient light sensor, and using [hopefully] a small SNMP subset to an ethernet shield to determine the state of activity. Based on these factors, I want to turn on/off various devices (PWM for fans speed of laptop cooler, IR to power on/off a few components, wireless X-10 for controlling lights), etc. I'll admit, I'm lazy; I could just do all of this myself, but with 6 kids running around, it's easy to forget to hit a power switch (let alone 5 or 6).

I have 2 Samsung monitors which have capacitive touch controls on the front. I would like to trigger these with the Arduino in the box to turn the monitors on/off, without having to rip them apart and hack them. I'm a perpetual upgrader, and I'd like to sell them in "like new" condition when I decide to.

So, from googling, I've found a few people mention that I could put a small metal plate over the sensor, and use a transistor to ground that plate to trigger the touch. I know nothing but theory of how capacitive touch works so:

This seems plausible to me; is it?

If so, can it be ANY gound (the one from the Arduino), or does it have to be the ground from the monitor?

Based on answers from the previous questions; could I run a single lead to a PNP transistors base and collector, and connect the emitter to the plate? Would this work?

On how capacitative touch "works", have you had a chance to read through the CapSense library page on the Arduino Playground? It's a decent overview. The technique is typical - measure how long it takes to "charge" a metal plate up to some voltage through a known resistance and infer the capacitance from that time interval. There's also a very instructive lab exercise at Cornell's microcontrollers course website.

What are the physics going on here? When you bring your hand closer to the plate you are increasing capacitance (by narrowing the distance between "the plates") - see also wikipedia entry on capacitance. You kind of serve as the plate of the capacitor connected to GND. So yes in principle driving an actual plate to GND through a transistor could work. Furthermore, if your Arduino is plugged into the wall, you most likely don't need to worry about whether you're at "the same" GND, it will be close enough. You might have a slight issue if you're Arduino is battery or USB powered though.

As for the actual circuit. I would actually try just connecting an actual digital pin to the plate. When you want to simulate "no touch", turn the pin to an input (without internal pullups enabled). When you want to simulate "touch" turn the pin to an output set to LOW. The only reason for using a transistor is if you have a current demand that exceeds the rating of the pin (about 40mA I believe), and this case really doesn't qualify.

The reason the stylus worked even through layers of wool is related to the very nature of capacitance: It is not about conduction (except at the electrodes themselves), it is about the insulation between the plates: Wool is about as good a dielectric as dry air, if it is not woven with some metallic fiber.

The way capacitive touch screens typically work is that they sense the change in capacitance that occurs when an earthed body - essentially any large conducting body, such as a human - comes close(r) to the surface electrode. By using a metallic stylus, that "earthed body" is being brought closer, with merely the wool in between.

This capacitance change can be measured in a number of ways. A common approach is to inject a high frequency signal between the sensing electrode and the device's own ground plane, with air (or glass, or some other material) as a dielectric between these two "electrodes". Any other conductor coming into proximity changes the dielectric (i.e. insulation) pattern, thus changing the capacitance, and thereby the pattern of load shown by the capacitor across the native capacitance.

Why not consider placing your small Arduino board and its power source in the electrical box where the light bulb is located?

From your diagram it appears that the powered 220VAC feed and return line are both in the electrical box at the light fixture.

Edit to Add an Alternate Idea to try out. There is too little data regarding the Lifx bulb to know if this is even feasible at all. So you would have to simply try it.

The idea is to remove the wall switch from the AC circuit and instead wire it into the MCU board. Then wire a small transformer across the AC lines that come to the switch box. This would likely have a low turns ratio and would operate off the current that passes through the special LED bulb unit. An AC power converter on the other side of the transformer would convert AC to DC power. 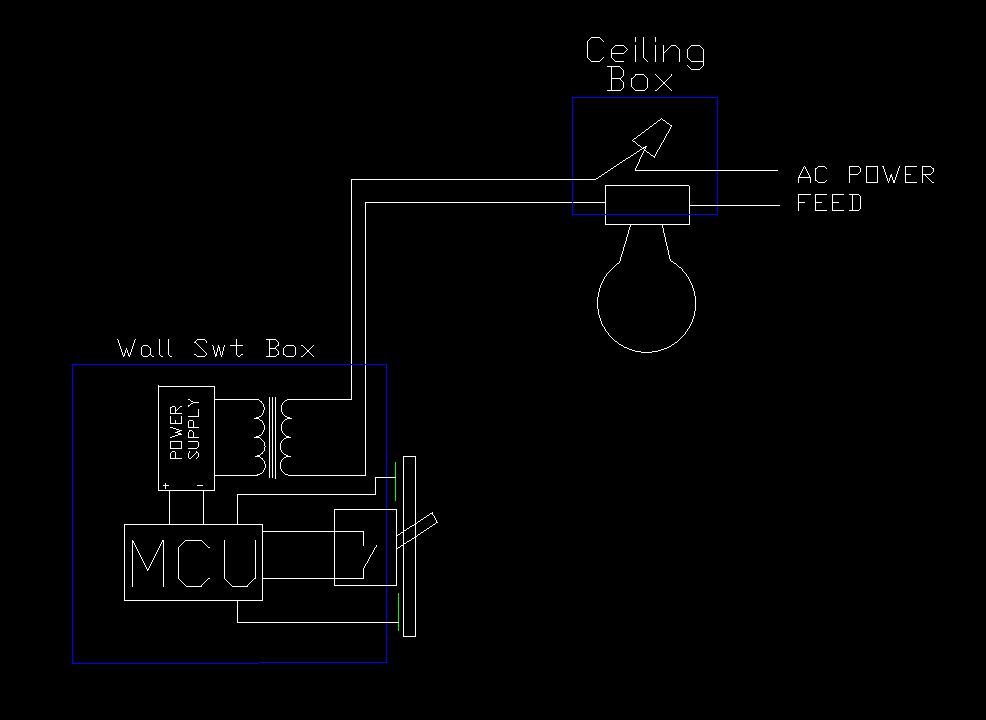