CMRR of op-amp is the ratio of the differential mode gain and common mode gain. What is the difference between these two ? What is the importance of CMRR in the performace of op-amp? How does CMRR in affecting the offset voltage and output voltage ?

To demonstrate the difference, here is the basic form of a differential amplifier which makes up the input stage for an opamp: 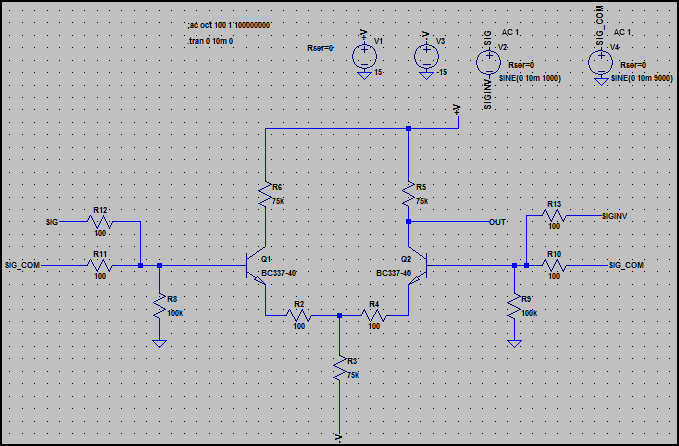 Notice there are two signals input at each side. SIG and SIG_INV are a 1kHz differential input (SIG is 180° shifted in phase from SIN_INV), and SIG_COM is a 9kHz common mode input (same signal at each side referenced to ground, i.e. 0° phase difference)
These signals are both at a 10mV (20mV pk-pk) level.

Now lets have a look at the simulation:

We can see the input (referenced to ground) is the mix of both signals, but the output is only the 1kHz differential signal at roughly a gain of 100. The differential amplifier has rejected almost all of the 9kHz common mode signal.

In the differential amplifier above, we can calculate both differential gain and common mode gain pretty easily. Here are the formulas with a brief explanation:

The differential gain is:

The common mode gain is given by:

From the above formula, we can see that the ratio between the tail resistor and emitter resistor is the main factor controlling the CMRR, so using a high impedance current source improves things dramatically.

The above equations don't take everything into account (you will need to do some further reading for the more subtle effects), but get you close enough for most applications.

That parameter says nothing about the CMRR. All it is telling you is the maximum common mode voltage (\$V_{comm}\$) the amplifier can handle while still meeting the other specifications.

Provided that \$V_{comm} < 1.2V\$ (and really, they probably mean \$-1.2V < V_{comm} < 1.2V\$) then the amplifier will function according to specifications. Ostensibly, this common mode signal is attenuated, but if the CMRR is unspecified, then we don't know by how much.

Just short-circuiting the inputs will not be possible. Usually, the small input offset voltage will be amplified by the opamp and will in most cases lead to saturation of the output.

Using a amplifier in buffer configuration reduces gain, so saturation will not happen at the output. However, it will change the output voltage as you sweep the input. Measuring the difference with the input will therefore give you the sum of the input offset voltage, a contribution due to finite gain and your figure of interest: the CMRR. So you have one more term in there. If the differential gain is much much larger than the CMRR then the approximation will be OK. But I don't think this is necessarily the case. The input offset voltage is more or less constant w.r.t. the common mode, so you can compensate for that.

When working with the differential amplifier configuration, you can add some gain to the CMRR, making the measurement more sensitive (if the resistors are matched well enough). The gain can be limited so output saturation due to an input offset voltage will likely not happen. And because the output stays close to constant, the extra term in the previous paragraph (caused by the finite gain) will also be much more limited.