I'm designing an ESC with a small microcontroller running at 3.3V. The BLDC motors I have chosen are extremely small, and run best at 3.7V. I have the power supply for both of these (3.7V is VBATT, 3.3V is obtained using a buck converter). They are 3 phase, and the controller needs to be sensorless. I would like to measure RPM and current usage as well if it doesn't mean I will have an overly complicated design.

All the docs I have found are great for higher voltages, and ridiculous currents (I will max out at ~5Amps at 3.7V, I don't necessarily need to design a 100V, 300A ESC).

Questions I have:
Is there a reference design I can follow somewhere around the net?
What kind of protection circuitry should I use?
How simple can I go?
Are there any ICs that will simplify the circuit even further?
Any other recommendations/tips/pointers?

Thanks for your time,
Mike

The simplest method for sensorless commutation of a motor is to measure the Back-EMF to determine speed and use trapezoidal six-step commutation method to drive the motor. A circuit similar to this one is a good place to start: 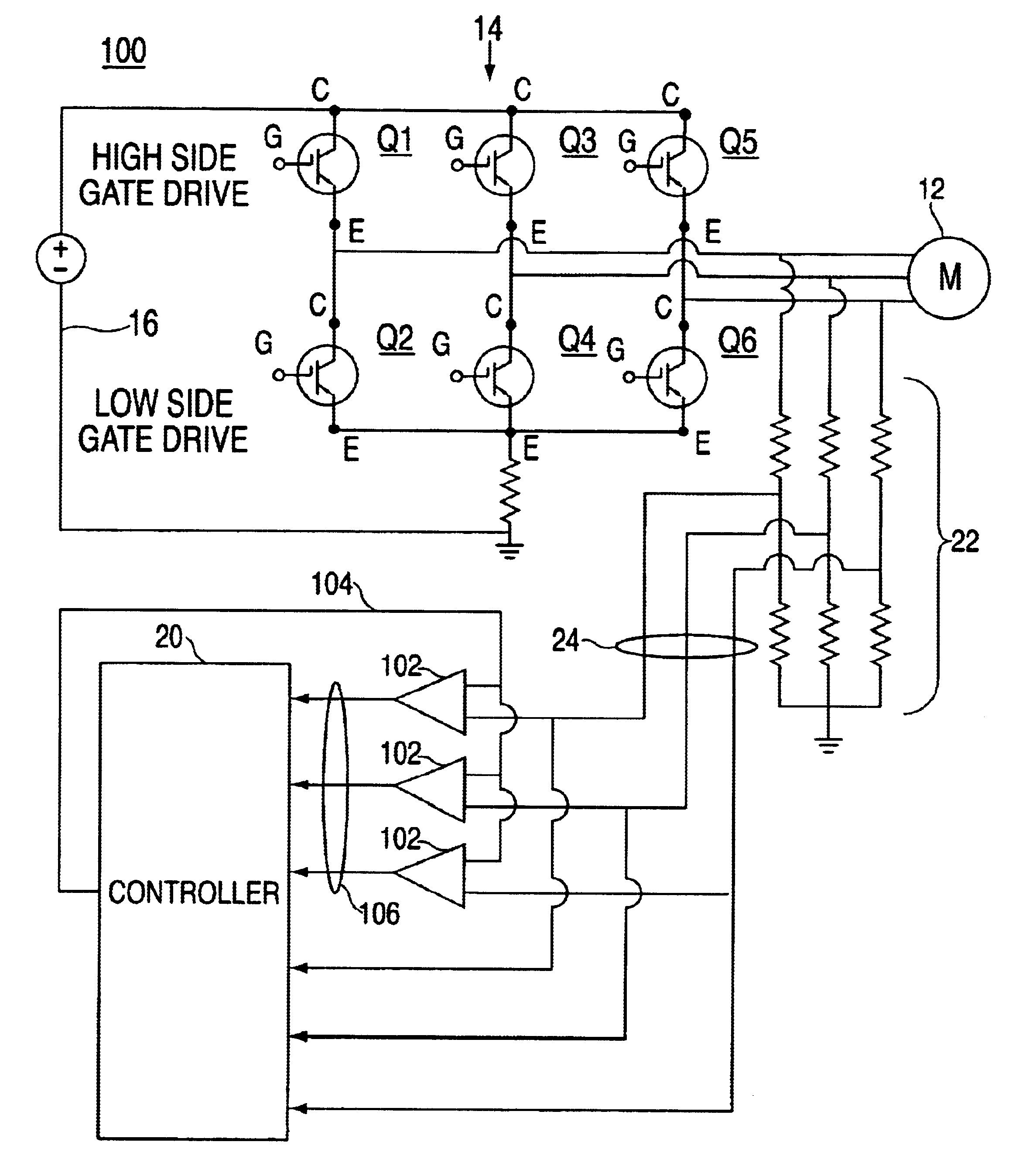 The section marked 22 is just a voltage divider to scale the phase voltages down into the range of the microcontroller's ADC. In this design they also seem to be sending the Back-EMF signal to comparators, marked 102, for zero crossing detection. If your Back-EMF signal is a nice clean trapezoid, the comparator method would certainly simplify the software design. But if the Back-EMF signal is noisy, there are many different filters and algorithms you can implement in software to process the signal and find the zero crossing that way.

Trapezoidal six-step commutation is the same as would be used if you were using Hall-Effect sensors to measure the speed instead of sensorless. You drive two phases with the third phase off. While the third phase is off, your software is looking at that leg to see when it's voltage crosses "zero", which is really 1/2 of the motor drive voltage (in your case VBATT). The zero crossing happens 30 electrical degrees before the next commutation (the next step in the phase drive sequence) needs to occur. 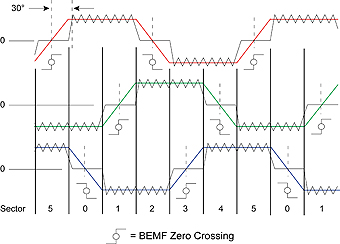 Sensing the total current used by the motor is relatively simple using the design above. Just measure the voltage drop across the resistor to ground at the bottom of the bridge. Measuring the current in each phase would require adding a series resistor or a current transformer. Use of a current transformer on two of the three legs (you could then calculate the third) is also how you would go about implementing more complex control methods such as Field Oriented Control which I won't go into here since you asked for simple.

I'm more familiar with the high power motor designs you were speaking of. In the high power case, there are specialized IGBT gate drivers with all sorts of protection built into them. I did a very quick search and couldn't find anything like that that operates at the voltages you're specifying. But the two main types of protection I would look to incorporate is transistor desaturation and over current. I usually run the gate drive signals and the over current detection signal through a CPLD or FPGA. When over current is detected, all the gate drive signals are set low in the CPLD or FPGA in order to open the drive as quickly as possible. The microcontroller usually isn't fast enough to do this and prevent damage.

The app notes that @suha linked go into much more detail on the subject of simple motor control. This paper gives a good comparison of some different control methodologies and why you may want to choose them over trapezoidal six-step.

An ESC should be ideal basis for what you want. I know that for electric r/c airplanes, you definitely can vary the speed since that's what the throttle control does, although I don't know that you can throw them into reverse.

However, an ESC is essentially a device for making three phase AC out of DC, and the old trick for changing direction of a three phase motor would apply, which is that you simply swap any two of the three connections and the direction of rotation changes. A DPDT relay or an H-bridge switching circuit could accomplish that for you. Although there's a very good chance that a ground-vehicle ESC could do reverse without any tinkering. It's worth looking for one that can do reverse before getting tangled in adding circuitry.

Also, they don't have any feedback capability that I'm aware of, it's strictly power into the motor, although again, I'm not familiar with them all. Even if there are expensive models that do what in BLDC controller jargon is referred to as 'sensorless control' - which is almost exactly what you said, every so often you stop driving power and check the voltage being generated to sense speed, it would be doubtful that the ESC would feed this information back to you. Chances are it would only use it to vary the frequency/phase of the AC it produces in order to better sync the fields in the motor. However, nothing says you can't turn off the ESC and directly read the generated voltages directly with the microcontroller.

One thing you could do, though, to tell when someone takes control over the platter, is sense the current being pulled by the ESC. You would have to LPF it to mitigate the switching frequency of the AC the ESC produces. As long as the ESC isn't told to accelerate the platter too quickly, with basically no load on it, the current demand should be fairly low. At a constant speed of rotation, the current should also be nearly constant, and low. As soon as someone tries to change the speed/position of the platter, this should be visible as a sudden change in current. The difficulty with this approach is that if you're turning the platter at low speeds, the AC switching frequency required for that is also quite low, so it might be hard to get the signal out of the noise. I'd put the current on a scope and fiddle with it, to see how good (or not) the signal is, before committing to building hardware for it.

Another thing is to use those reflective optical sensors, like the lego robotics setups. Or hall sensors as you suggested. Either way, you'd get input that could be changed to speed information, that you could compare against what the controller expects the speed to be. Any change in expected speed, and you momentarily (1/4 second?) disable the ESC and if the platter keeps moving above a certain threshold speed, or doesn't stop for longer than a threshold time, leave it off, otherwise, back on.

2/ You need to sense the rotor position somehow. The magnetic field in the motor coils needs to rotate slightly in advance of the magnetic field in the rotor in order to pull it around, so you need to know where the rotor is to switch the next set of coils on at the right time. If the motor does not have hall effect sensors then you do this by sensing the emf in the coils. This only works once the motor is rotating, so there is a slower fixed sequence to start the motor.

3/ As the app notes will tell you, the wave form of the field required for these motors is 'trapezoidal' which is essentially a square wave.