I've designed an inrush current limiting circuit and would welcome a review from experts with more experience with this sort of thing. The load will be around 50 x 19 VDC @ 3.5 A linear power supplies connected in parallel with steady state load up to around 20 A @ 230 VAC.

There are a few specific requirements that motivated my own design rather than an off-the-shelf version:

Here is my schematic: 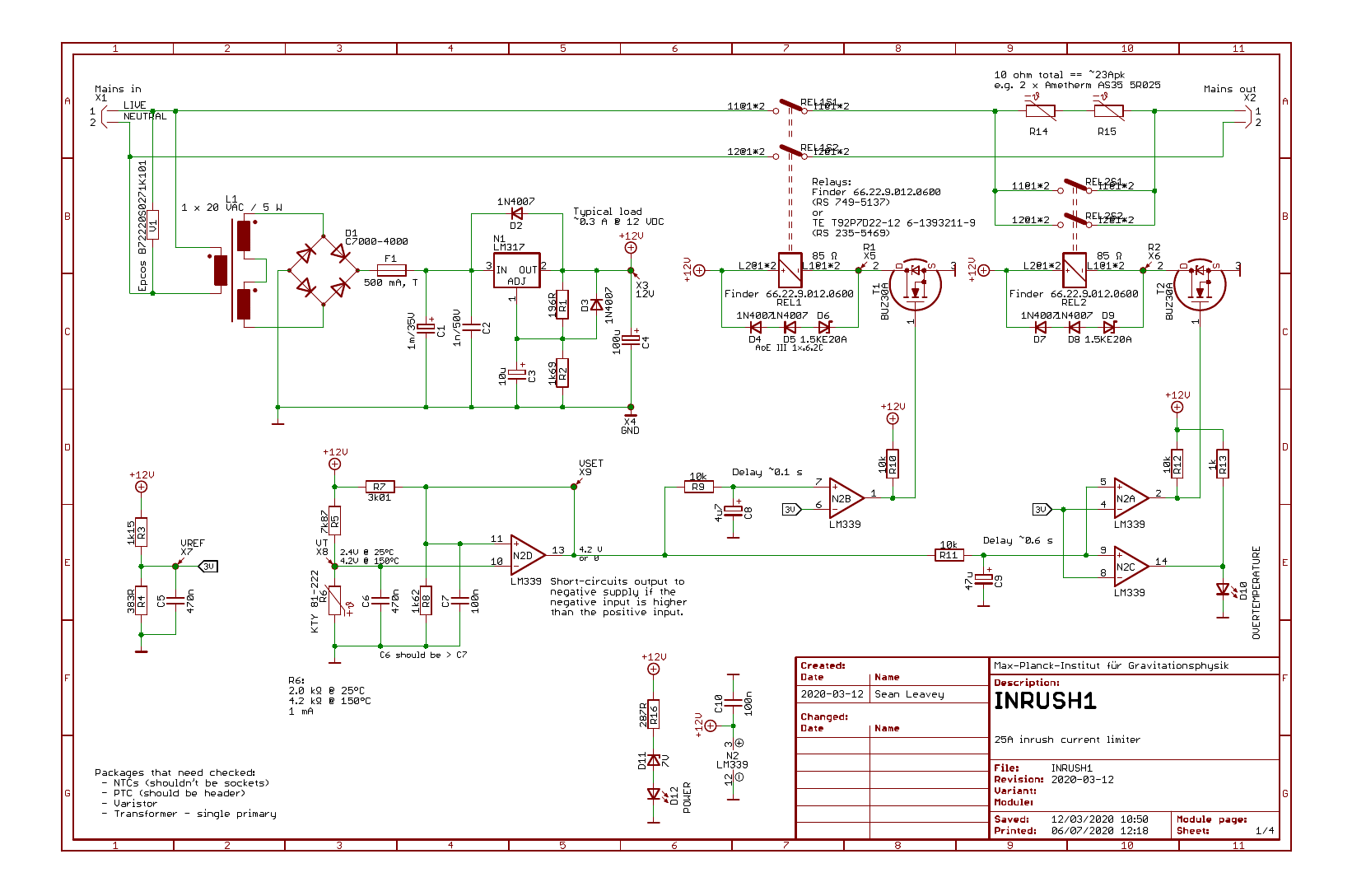 As is typical with inrush current limiting circuits, to avoid the power loss in the NTCs during steady state (which at 25 A is significant – around 200 W) I short out the NTCs with a relay after a short delay (~0.6 seconds, depending on tolerance).

There is also a thermal trip switch so that if the NTCs get too hot the current will trip and stay off until the power is cycled (so that the circuit does not yo-yo between on and off as the NTCs get hot and cold). This is my own invention (as far as I know) but I have not tested it before. I did simulate it in SPICE and it seems to work.

The intended sequence when power is first supplied to the circuit is as follows:

I can't share the PSU datasheet since it's confidential but it contains the following information:

I can open up a PSU to look at the input stage but I suspect it'll be a fuse, toroidal transformer then smoothing capacitors and regulation (somewhat similar to what I have in my design). I expect the transformer is what causes the large inrush current on switch-on, since at that point it has no magnetic field and thus initially acts like a low value resistor. Unfortunately the datasheet doesn't state the input capacitance/inductance directly, but perhaps this can be worked out from the values above?

Does anyone spot any issues? Do people think my thermal latch, timings, etc. will work?

I've designed an inrush current limiting circuit and would welcome a review from experts with more experience with this sort of thing.

Depending on how the UPS is designed, it may not "play-ball" with the series resistors because they may cause the UPS to try and take a really excessive starting current (which it can't take due to the resistors). The upshot of all of this is that the UPS never really kicks into action until the relay closes (shorting the current limiting resistors) and then, you have the same inrush problem just delayed in time.

So, to design this we really need to know what the front-end circuitry in the UPS is like.

Regarding the contact closure that short the resistors, I'd be much more inclined to activate that contact when the AC supply output has risen to the point when the UPS (if it plays ball) is e.g. 75% of the input voltage. A fixed time delay produced by R11 and C9 is too "open-loop" to be effective.

You also need an input fuse on transformer L1 because most magnetic components like this are not rated to be connected directly across a very resilient mains AC supply. Fuse F1 on the output of L1 won't cut-the-mustard in this respect. Ditto the input varistor U1.

Why are your flyback components two series diodes in series with a zener. I can understand one diode and a zener but two diodes and a zener seems like you may be misunderstanding something.

The inrush current would be commonly caused by the charging of power supply capacitors. These loads would not appreciably change depending on any other circuit setting (such as dimming).

The common ways to limit inrush current are:

In some cases, some components of the inrush current could be reduced by staggering (i.e. sequencing) the multiple power supplies in a system (the large filtering capacitors at the output of the supply also have to be charged).

Electrical – How does the high inrush relay handle the inrush current

Inrush capacity just means that inside the relay, the components are capable of dissipating the heat caused by the very brief (1-2 cycle) inrush current without causing damage.

That has nothing to do with the "breaking capacity" of the relay. Rating of a switching device for control of a motor is not really about the inrush, it is about stopping the flow of current when the motor has been running. When contacts separate under load there is an arc that forms, and it is extinguished when the dielectric of the air is sufficient to stop the current flow. Induction from the motor will cause the voltage to rise in the arc as it forms, which will sustain the arc for longer. The arc is then melting the contact surface areas, potentially destroying them. So the capacity of those contacts to stop that current flow and extinguish that arc without vaporizing and/or welding in the process, determines the maximum motor size it can handle. If you are switching a motor, you need a relay / contactor that has a motor rating equal to or greater than your motor power (HP or kW). If the contacts have no motor rating, they are incapable of being used in that manner.