FCC regulations apply to unintentional radiator devices, but provide exceptions for subassemblies, including this one:

CPU boards, as defined in §15.3(bb), other than those used in personal computers, that are marketed without an enclosure or power supply

Would a PCB business card qualify since it has no enclosure? Do batteries qualify as a power supply? The rest of the page references power supplies in relation to personal computers, but the definitions page does not define power supply. I would be giving these away instead of "marketing" them, but I'm not sure that makes a difference. Also, new rules came out in 2017 about testing, which may be relevant here.

The board I would like to build would have a small screen, tactile buttons, and a microcontroller and use 1-2 coin cell batteries. It would run at over 1.7MHz and use more than 6nW, so I don't think it qualifies for any exemptions.

Here are a few similar projects I have found that seem comparable:

Tiny Tetris on a business card

I can understand your frustration, testing is expensive:

Request quotes from a few test facilities as well as timelines for when they can get your product into their facility for testing. They will generally handle the filing after you fill out a few forms. Quotes for an intentional transmitter may contain sections for the following (rough ballpark numbers. your results may vary):

An unintentional radiator (defined in Section 15.3 (z)) is a device that by design uses digital logic, or electrical signals operating at radio frequencies for use within the product, or sends radio frequency signals by conduction to associated equipment via connecting wiring, but is not intended to emit RF energy wirelessly by radiation or induction.

Today the majority of electronic-electrical products use digital logic, operating between 9 kHz to 3000 GHz and are regulated under 47 CFR Part 15 Subpart B.

Products that only contain digital logic may also be specifically exempted from an equipment authorization under Section 15.103.

The only devices that receive exemptions are these:

Except as otherwise exempted in §§15.23, 15.103, and 15.113, unintentional radiators shall be authorized prior to the initiation of marketing, pursuant to the procedures for certification or Supplier's Declaration of Conformity (SDoC) given in subpart J of part 2 of this chapter...

As stated in the question, your device would not fit in the unintentional radiators exemptions category (15.103) your device is definitely not at 15.113 (Power line carrier system)

(a) Equipment authorization is not required for devices that are not marketed, are not constructed from a kit, and are built in quantities of five or less for personal use.

(b) It is recognized that the individual builder of home-built equipment may not possess the means to perform the measurements for determining compliance with the regulations. In this case, the builder is expected to employ good engineering practices to meet the specified technical standards to the greatest extent practicable. The provisions of §15.5 apply to this equipment.

Your device is an unintentional radiator but not one under section 15.102 (CPU boards and power supplies used in personal computers.) Because these are related to PC's and their components, these components usually are designed for operating inside of a metal enclosure, they also have their own standards that need to be tested.

If your device is not exempted, then you'll need in the least verification because you have a CPU in your product (and it above 1.7MHz check the Frequency allocation list\chart). If your device starts messing around with radio device or knocks someones cell out, someone might complain. It's when people complain (if your radiating on their band) that you get into trouble and become the "responsible party" and if your found to be above the limits, then the producer of the product gets a fine. And rightly so, it can take a significant amount of resources to find an offending device.

RESPONSIBLE PARTIES The FCC has very specific rules as to who is responsible for regulatory compliance regarding various types of RF devices. Different rules apply for RF devices subject to various types of authorization. The responsible party is the exclusive party that is required to ensure that RF devices under its custody comply with FCC rules. This includes all identical devices marketed after authorization. Because the responsible party is liable for noncompliant RF devices and related matters, that party will be subject to FCC enforcement actions in the event potential rule violations are discovered (see 47 C.F.R. § 2.909).

If it's a prototype then you don't have to worry about testing, but you still have to worry if your device is an unintentional radiator

What does this mean for a hobbyist?
Very little, actually, depending on what you’re doing. The FCC allows a hobbyist to build up to five devices of a single design for personal use with no testing whatsoever. If you are contacted by the FCC (or anyone else) about a matter of spectrum interference, immediately stop using the device, don't use it again, and you should be okay. Stick to the ISM bands (13.56MHz, 27.12MHz, 40.68MHz, 915MHz, 2.45GHz, and 5.8GHz, +/- a bit for each) for added comfort

So stick in an unlicenced band for extra comfort and design around that.

How do some companies get away without certifying their devices?

You may be asking yourself how companies such as Sparkfun, a business based on selling electronics kits and wireless development kit companies continue to sell large numbers of non FCC authorized kits, with seeming impunity. For Sparkfun, the rules that apply in most cases relate to “subassemblies”. This just means that Sparkfun’s customers will most likely use the products to build larger products containing a number of subassemblies. For example, that may include an Arduino™ processor board along with several sensors or peripherals and an LCD. The user may even put all of these parts into an enclosure. If the user sells this product containing multiple subassembly parts in an enclosure, for all intents and purposes they are now a “manufacturer” and their equipment is subject to the normal FCC authorization procedures.

Where is the FCC’s line in the sand for when home built equipment becomes subject to their rules? That is defined in Part 15.23.

“Equipment authorization is not required for devices that are not marketed, are not constructed from a kit and are built in quantities of five or less for personal use.”

That’s probably easier to understand if I say it in the opposite way; If you are marketing your product (are you putting out ads, or offering your product for sale?) or it is not intended for personal use (i.e. it’s for someone else) or if you make more than 5 of them, then you need to have your device tested according to FCC rules. If you do any of these things, the FCC views you as a manufacturer.

You apparently have a unintentional radiator, so that means you don't actually have to have it tested. It is your obligation to make sure it meets the emission requirements if you sell it in the United States, but how you decide it does that is up to you. There therefore aren't any specs on what the equipment you use to test for compliance needs to be, since you don't have to test for compliance in the first place.

However, unless this is a very minor niche low volume product from a obscure company, it is a good idea to get it tested. Effectively, you can't do this yourself unless you are willing to invest 100s of k$ in a calibrated setup, and then spend a significant amount annually to keep it calibrated and verified. The test equipment itself is only the beginning. You need a proper range or anachoic chamber, calibrated antennas, etc. From the costs you were mentioning, this route is clearly not for you.

What you need to do, if you want to be really sure your device meets the requirements before you sell it, is to hire someone else to do the testing that has already spent the large sums on a proper setup. There are test houses all around that do exactly that as their main business. There are probably half a dozen within 2 hours drive from Boston, for example. I don't know what it's like in IN, but there are bound to be a few around. If you know what you are doing and have designed your device with emissions in mind, then testing may cost as little as $3-5k. The price goes up from there inversely proportional to how much you know what you are doing.

Your own test equipment will be useless for making absolute measurements, but it can give you some idea which frequencies you have spikes at. If you are careful to create a repeatable setup, then you can use it to test the relative effects of various changes to your design. For example, you might see you have a peak at 327 MHz with a arbitrary value of 20 dB with the way you arranged the receiving antenna, oriented your product, routed the ethernet cord coming out of it, distance from antenna, etc. After adding a few caps and series inductors to the power cord, you find the same setup reads 14 dB at the same peak. That means your design changes reduced that emission by about 6 dB. If you flunked formal testing due to that peak being 2 dB above the limit, you are probably OK.

Remember that your own tests are only for relative signal strengths before and after some changes you are trying to test. Repeatability of the setup is critical to get anything useful at all. When I'm doing this, I usually clear off a area, use a non-metal table, carefully tape down the antenna and the cord leading from it, and usually use tape to mark exactly where the unit under test is placed. I also usually tape down dedicated cords that go to the unit that are used only for the testing. Use other cords when running the unit elsewhere. The point is to not disturb the RF testing setup to that it is as repeatable as possible. This includes where you are while you are taking measurements.

From my experience with this (several products, using various combinations of wireless devices), then if the wireless module you use (be it cellular, Bluetooth, BLE, Wi-Fi or ZigBee or ISM) includes an antenna, and the entire module (radio + antenna) has been tested per FCC requirements (and therefore has an FCC ID stamped on it), then you do not have to do any further testing.

Here is an exmple of the type of module I am referring to. Note the chip antenna on the upper left corner. 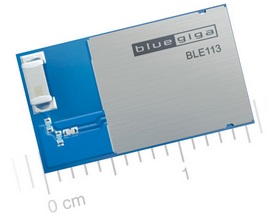 Note the one pictured above is pretty much blank. The real one I have on my workbench is covered with text and logos, including an FCC ID and CE mark.

As long as you have only one wireless device on your board, (and there are no other wireless devices on other boards) the person using it in their product should be able to use the FCC ID that is stamped on the module.

But, if you have a module that attaches to a separate antenna, and only the module was certified (or not), then you must test the combination together. Furthermore, if you have more than one radio in the final product, then they must be tested together, even if they have been certified separately.

This is my understanding. You should have it verified by someone else before proceeding.