This question stems from notations on schematics and seemingly conflicting information I'm seeing. I suspect that I'm seeing different vernacular for the same concepts–but I'm in a place where no one's ever told me that an "elevator" is a "lift". Then again, I may have the concept completely off, and need to be schooled so I don't blow up my workshop. 🙂

Then, we move to AC. There's a hot wire (positive), a neutral wire, and ground. I ~assume~ that in an AC circuit, positive correlates to positive, neutral to negative, and ground to ground. Transformers will correlate the +/- when changing DC.

What are the facts and what are the myths? How can I tell if I need to ground something to earth vs. "ground" to the negative terminal? When do I ground to the chassis of my device? Are there standard conventions in a schematic that would indicate GROUNDED ground vs. return-to-the-source ground? Or is that something you know from experience and doing an analysis of the circuit? Is it generally safe to assume I can connect ground to negative? Or are there cases in which that would be a Very Bad Thing, and how do I identify those cases?

Just trying to wrap my head around +/-/ground in AC vs. DC, and how that voltage is used…

Ground means whatever is attached to this symbol in the schematic:

Since voltages are relative, ground exists as a sort of assumed reference voltage. If we say an input is "5 volts", we mean "the difference between the input and ground is five volts".

In the context of AC, things aren't really different, except that tradition has done a good job of making the same term "ground" mean many things. It still could mean whatever is attached to that symbol, or it could mean that 3rd connector on the wall. More on that later.

As far as the circuit is concerned, live and neutral are no different. Pick either one, and the other oscillates between a higher and lower voltage, relatively. If all you have are those two wires for reference, they are indistinguishable.

However, I said neutral should be about the same potential as Earth, and since you are probably touching Earth, you. But, I wouldn't trust your life on it. There could be a faulty transformer on the pole near your house. There could be a lightning strike nearby. The house would be wired backwards. Or, as I mentioned the circuit will function even if the wires are reversed, it could be plugged in backwards. In the US, one of the prongs is a bit fatter to prevent this, but you never know. This is why there's the third connector, called ground or earth. This should go to a big copper rod near your house stuck in Earth, like this: 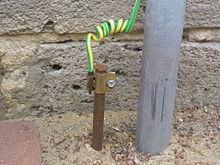 It doesn't otherwise connect to anything else. There are some times this is important for safety, and other times it's important for other reasons. Point is, it has nothing to do with the electrical power supplied to your home.

How can I tell if I need to ground something to earth vs. "ground" to the negative terminal? When do I ground to the chassis of my device?

If we are talking about a device that plugs into the wall, leave these questions to someone else. Each country has safety regulations, and these regulations exist for good reason. Buy a DC power supply that takes care of all that for you, and connect to its output, and nothing else. Don't connect to Earth through the 3rd pin on the wall or you may circumvent the safety features of your power supply.

If you are wondering if the "ground" symbol on your schematic should also be connected to box your project is in, well, it depends. Maybe you want to do that for RF shielding. Or maybe you don't, because you don't want some other device with a different idea of "ground" to touch it, which could result in noise in your circuit or melting something. In many circuits, it doesn't matter at all.

Because the supply is floating, and you only made one measurement at once.

Floating means isolated, which means the resistance between the supply and ground is very very high. So high that the 10 Mohm input resistance of your multimeter is almost a short circuit in comparison. 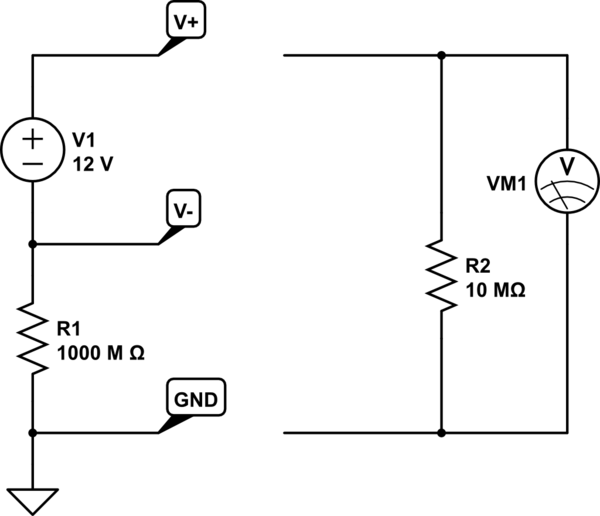 If you were to make both measurements at once, with identical meters, you would find V- at -6V and V+ at +6V with respect to ground, and 12V of course between V- and V+.

A 12 volt battery has 12 volts between its terminals. Voltage is always measured between two points - there is no "absolute" voltage.

If you connect the positive terminals instead, there will be a 1 volt difference between the negative terminals.

The term "Ground" is much misused in the electrical field. Occasionally it does mean a connection to the Earth, but most often it is just the point in a circuit that the designer chose to call "zero volts", and uses as a reference when measuring voltage elsewhere in the circuit.