During large-quantity PCB assembly/soldering, are SMD (surface-mount) headers traditionally easier or harder to assemble than DIP (through-hole) ones?

By easier/harder, I'm concerned about differences between the two in terms of assembly time/cost. I'm designing a board where I would like to make a better-informed choice between the two.

I suppose the only way there would be a difference in difficulty between the two is if one of them were manually soldered, so another way to ask the question might be:

Are both kinds of headers soldered by hand to this day, or is one of them machine pick-and-placed with some customized reflow profile so as not to melt the plastic?

If you mix SMT with THT , you may need to do wave soldering after reflow soldering for 1sided boards. One way to avoid this is to assemble pin in paste connections by design. Hole size and paste aperture size are selected to reflow the THT header at same time as SMT parts. Consult with Process Engineers for best results.

Electronic – Do they make triangle-shaped headers

TE Connectivity's 8058-1G23 is a PCB-mount TO-5 socket that should either fit the sensor or be very, very close. The -1G29 is the same but with solder pockets instead.

Connecting 2 male headers on a pcb together 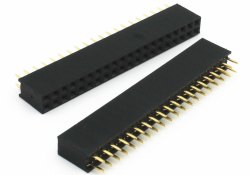 soldered back to back to make a female-female joiner. If you overlap the contacts they only add 15mm to the overall length (compared to a normal male/female header combination) which should not be significant at 32-48MHz.

If any of your signals still have excessive ringing or ground bounce then you could try inserting small value resistors (10~50Ω) in series between the connectors.