I'm working on a PCB which has to be very small. There is a QFN IC which has a big thermal pad, although it doesn't really need to dissipate that much heat. So to save some space, I came up with the idea of reducing the footprint of the thermal pad so that I can place some vias and traces in there. It would be covered by solder resist so it doesn't sound unreasonable to believe that this might be okay.

However, if it were such a good idea, everyone would be doing it, and I'm wondering how bad it is. I've seen this similar question but it's not exactly the same thing. 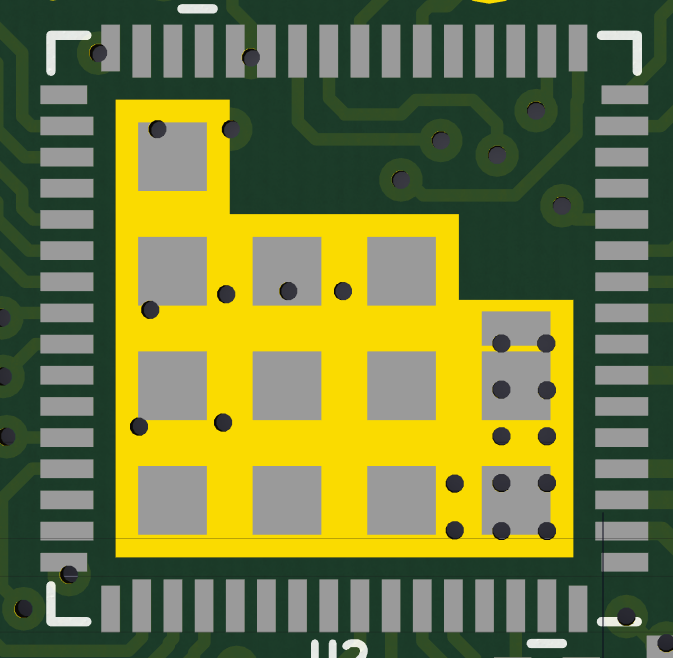 I would not go with this. Small designs will not necessarily heat up that much, but running an exposes pad so close to your traces is risky. Depending on volume, you will get some boards where part of that trace is exposed, or the via mask is scraped off. The wear and tear on the board depending on use case might expose something, or maybe that part does heat up a slight amount and over time causes unexpected behavior.

Overall it is just not good design practice. Use another layer.

Electronic – Can you place vias inside a QFN footprint

If those clearances are in spec for your shop, you're using a very advanced shop. The drill registration, in particular, must be very good.

Normally, the pad around the via is just big enough so that if the drill hole is off center (to the limits of its tolerance), the hole won't break out more than x % of the perimeter of the pad.

If that's what you're doing here, I suspect you have a potential problem. If the drill hole goes off toward the QFN pad enough to break out of the via pad, it will not have any solder mask between it and the QFN pad. Then, when you lay down solder paste and reflow the QFN part, its possible for all the solder to get sucked down the via, leaving you with no connection (or a very dodgy connection) to the QFN part.

If your via pads are actually much oversized so that there's no risk of the via hole being outside the solder-mask area, then you could be okay. But that's probably still requiring very tight drill tolerance. If this is a one-off, no problem. If you want to take this to production, first make sure your production shop can meet the same tolerances at a price you're willing to pay for this board.

An alternative might be to do "via-in-pad, plated-over" (VIPPO). That puts the via right in the pad, then deliberately fills it with solder or some kind of polymer so it won't suck solder away from the joint with the part. But I'm not sure if you can do that with a very small pad like you've drawn here.

The answer is that "it depends". Also, I would like to point out that there are TQFP's with thermal pads, so this isn't a QFN vs TQFP issue. It's a Pad or No Pad issue.

I personally would always choose a thermal pad over no pad, and always a QFN over TQFP. Of course most of my PCB's are 6 or 8 layer boards with 4 mil traces, so routing and fanout usually aren't a huge problem. Cooling is usually a problem for me. I do benefit from the smaller QFN's. And the better signal integrity and lower EMI is a huge plus for me.

The other side benefit is that nobody asks me to rework a QFN! :)