Closed. This question needs to be more focused. It is not currently accepting answers.

Want to improve this question? Update the question so it focuses on one problem only by editing this post.

I'm having an hard time understanding primary cells.
There are plenty of videos and explanations about the reactions that happen inside the battery, but you must have a strong background in chemistry to really understand them.
Instead, I would love to have a description that abstracts from the chemicals details, and still manages to explain its basic working princeples!
I would like it to address the following questions/doubts:

I know there are a lot of questions but my mind is exploding. I don't expect everything to be abstracted from the chemicals but as long as you can through analogies, or intuitive principles, i'd love that. Anyway the main intent of the answer must be addressing the doubts listed.

is an electric field already there, before connecting it to a wire?

Yes otherwise no current would be able to flow through a load connected to the battery contacts. The electric field is what makes the electrons move and the moving of the electrons is what contains the energy.

Electrons have a negative charge, so an excess of electrons is present on the negative or Cathode (-) connection of the battery. On the positive or Anode (+) terminal, there is an equal but positive charge (due to missing electrons) present.

Note that the total charge is zero, so the amount of surplus electrons at the (-) contact is equal to the amount missing at the (+) contact.

This charge (electrons or those missing electrons) is actually insignificant, it does not contain much energy. The significant part is that if you connect the (+) and (-) contacts, a current can flow because the charges want to neutralize.

However, the chemistry going around in the battery then starts "moving" **ions* (which can have one or more surplus or missing electrons) from the (+) contact to the (-) contact. This process consumes certain chemical substances and forming others while electrons are "made free" and end up at the (-) contact (the Cathode).

The electrons do flow inside the battery; they are transported by the ions from anode (+) to cathode (-), completing the current loop. To make them flow this way, energy is needed. This energy comes from the Chemical reaction going on in the battery.

If there is no load connected to the battery, the electrons remain stuck at the Cathode. They accumulate there until a certain voltage is reached, when the Chemical reaction (which produces the electrons) slows down and stops. The chemical reaction stops because it cannot "deliver" the "free" electrons anymore. It can't deliver the free electrons anymore because it requires increasingly more energy for as the potential increases. Once a given potential is reached, the process stops. When a load is connected, it lowers the potential (slightly), which allows more electrons to be "freed", which starts the process again.

The rate of electrons generated depends on the current through the load. Look up the definitions of electric current, its relation to charge, and the charge of a single electron. Then you can calculate how many electrons are involved in making a current of 1 Ampere flow for example (1 Ampere corresponds to 6.25 × 1018 electrons per second).

In Primary batteries, there is no way back; when the needed chemicals are used up, the battery has become useless.

In rechargeable batteries, the Chemical process can be reversed by forcing the electrons (on the back of the Ions) to flow the opposite way (from Cathode to Anode) inside the battery.

How long a battery lasts depends on how you use it. A situation that quickly drains the battery uses less total energy than one where the load needs a small current. Look in battery datasheets to see the difference; there can be up to a factor 5 difference in available energy!

Note that I am not a battery expert, if there are any flaws in my reasoning please mention them in a comment.

lithium cells have a nice steep monotonic charge-to-voltage curve, so if you connect the 18650 cells in parallel they will self-regulate to have the same charge level. 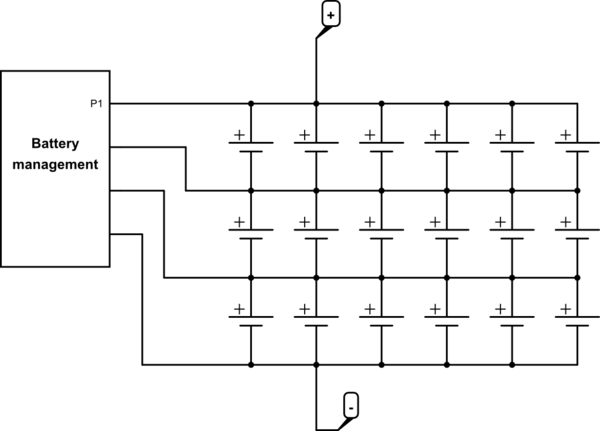 Electronic – How does this surface mount coin cell holder work

Presumably after it is soldered in place, you just slide the coin cell underneath the central part

No, this is meant to replace the usual PCB pad. In some applications a PCB copper trace doesn't meet the requirements (perhaps it's the wrong plating, etc) so they place a component to act as the negative contact. This fits entirely under a typical side insertion coin cell holder, and is thin enough that in most applications you don't need a taller one - it adds pressure, which may be a good thing depending on the application.

Why are there little holes in the tabs, which presumably are the mounting points - won't this just reduce the strength of the mounting?

Not necessarily. The solder fillet that forms in the hole may add as much strength as a flat contact, but more importantly this allows for inspection of the solder joint. Further, this is the negative contact, and pressure will be applied from above, pushing it into the PCB. This won't undergo significant pulling strain.

The 'gap' into which to slide the coin cell seems to be only 0.41mm high, which is surely ridiculously thin for a coin cell - is the idea that the holder stretches up to accommodate it?

No, the cell goes above it.

what size coin cell will it accept, and why isn't this specified on the datasheet?

Doesn't this method of operation mean that there will be a lot of upward force on the contacts?

Not applicable when used correctly.

How will this ensure a good enough electrical connection to the positive terminal, if there is no solder used there?