With the following circuits as examples : 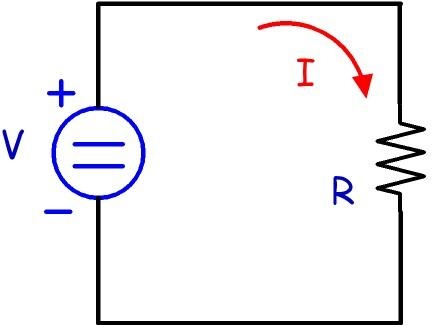 How will the current I know how much to flow?
Would any other wave travel first in the circuit and then come back
and say so much current should flow?

Not sure if this is what you're asking, but yes, when the battery is connected, an electric field wave travels from the battery down the wires to the load. Part of the electrical energy is absorbed by the load (depending on Ohm's law), and the rest is reflected off the load and travels back to the battery, some is absorbed by the battery (Ohm's law again) and some reflects off the battery, etc. Eventually the combination of all the bounces reaches the stable steady-state value that you would expect.

We usually don't think of it this way, because in most circuits it happens too quickly to measure. For long transmission lines it is measurable and important, however. No, the current does not "know" what the load is until the wave reaches it. Until that time, it only knows the characteristic impedance or "surge impedance" of the wires themselves. It doesn't yet know if the other end is a short circuit or an open circuit or some impedance in between. Only when the reflected wave returns can it "know" what's at the other end.

See Circuit Reflection Example and Transmission line effects in high-speed logic systems for examples of lattice diagrams and a graph of how the voltage changes in steps over time.

And in case you don't understand it, in your first circuit, the current is equal at every point in the circuit. A circuit is like a loop of pipework, all filled with water. If you cause the water to flow with a pump at one point, the water at every other point in the loop has to flow at the same rate.

Electronic – How does current flow through a voltage source

My favorite educator, Bill Beaty, often rants at the many misconceptions that all too many people have been infected with. One of the many common misconceptions involves batteries.

"Frequently-Asked Electricity Questions": "THE LIQUID BETWEEN A BATTERY'S PLATES IS A GOOD CONDUCTOR. SO WHY DOESN'T IT SHORT OUT THE BATTERY?"

"Why is electricity so hard to understand?" "...mistaken belief that no charge flows through batteries. ... This leads to the traditional incorrect flashlight-current explanation (current comes out of battery, flows...etc.) It also leads to the misconception that batteries SUPPLY CHARGE, and have a storage place for "used" charge. This might make sense if we believe that there's no path for charge through the battery. But it's wrong, because there is a path, a path provided by flowing charged atoms. Charge must flow around and around a circuit, passing THROUGH the battery over and over."

"But how SHOULD we teach kids about 'electricity'?" "A battery is a chemically-fueled charge pump. Like any other pump, a battery takes charges in through one connection and spits them out through the other. A battery is not a source of the "stuff" being pumped. When a battery runs down, it's because its chemical fuel is exhausted, not because any charges have been lost. ... When you "recharge" a battery, you are pumping charges through it backwards, which reverses the chemical reactions and converts the waste products back again into chemical fuel."

'Which way does the "electricity" really flow?' "When you connect a lightbulb to a battery, you form a complete circuit, and the path of the flowing charge is through the inside of the battery, as well as through the light bulb filament. Battery electrolyte is very conductive."

Electronic – How much current actually passes along household neutral

If you have equal loads between black and neutral, and between red and neutral, the "black" current and the "red" current will cancel in the neutral - there will be no current in the shared neutral wire.

Anything that only uses 240V (hot water heater?) will not connect to the neutral, and therefore will not cause any neutral current.

An electric stove will use 240 V for the heating elements, but also uses some 120 V for lights and a clock, so will require a neutral connection, and so will generate some neutral current.

The current in the neutral wire between your house and the power company's transformer will depend on how the loads in your house are balanced between the two "hot" wires.